Long before TV’s “Melrose Place” hit the TV airwaves; there was Melrose Avenue, the real Melrose Avenue – one of the unique sections of the city which help define the L.A. experience. It’s a funky, New Wave, a walking-shopping-dining-people-watching area which is, in turn, both bizarre and delightful. Melrose is one of the few genuine pedestrian neighborhoods in the City of Angels, and it is unique, with a quirky, slightly-demented personality all its own. Tattoo parlors and designer boutiques reside politely alongside each other on L.A.’s flashiest avenue. Hair supremo John Frieda remembers the moment six years ago when he “discovered” Melrose Place, a fashion destination that proves that modern luxury hides behind a bush. This street is fabulous; a discreet, tree-lined avenue. Because of architecture, it renders a sense of hidden away. The discreet salon (with its pool) of the most sought after Hollywood hairstylist Sally Hershberger at John Frieda is now the anchor for upscale designer labels. 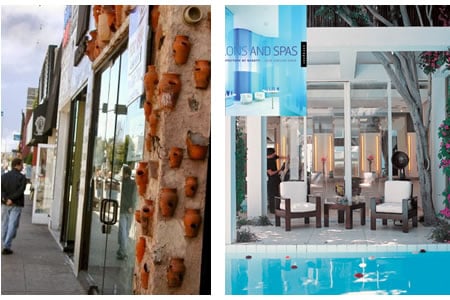 Carolina Herrera, who had eyes on Melrose Place for four years, celebrated the official opening of the store this month. She says, “I think it is very chic and I am in love with this space. It is going to be the most important street in fashion.” Herrera is not the only enthusiast for this two-block street hidden behind Melrose Avenue off La Cienega Boulevard. Oscar de la Renta has taken premises; Marni already has its quirky store, along with the British designer Alice Temperley, while the Florentine beauty label Santa Maria di Novella will soon rub shoulders with both Mulberry and the first free-standing Marc Jacobs men’s store. Opposite that, Diane von Furstenberg’s boutique has joined the designer cluster which will soon add Chloé and Vera Wang. The intimacy of Melrose Place compares to the bustling, youth-oriented Robertson Boulevard, a five-minute drive away, and the glossy plate glass and palm trees of Rodeo Drive which has chandeliers as its Christmas lights. Could all this have happened without Sally Hershberger at John Frieda? This is a beauty!