There’s a snide remark often made in the world of luxe travel that Aman junkies have the most predictable holiday destinations. Why of course they do. They choose their pickings based on where their favourite hotels are located. And for good reason too. The refined minimalism and exotic destinations that set these properties as the benchmark for the global hospitality industry often leave an unrivalled perception in the minds of visitors. Which is just why I was intrigued by the Aman Tokyo, located in the midst of the bustling intersections of busy Tokyo streets. This is the first time the chain ventured into opening a hotel that wasn’t in a location that loyalists would necessarily define as ‘exotic’. But, then again, who’d wager anything on Aman getting it wrong?

I was on my way from Nagoya via the bullet train and had my expectations as high as the speeds that the metallic monster was hitting. In the maze that was Tokyo station, a first-time visitor is often overwhelmed by the number of exits. Quite unexpectedly though, we were greeted by Aman staff with their warm smiles, prim uniform and an Aman Tokyo board right on the platform of the train station. It’s incredible – the amount of attention paid to delivering the finest guest service. We were chauffeured through the city to the Otemachi Towers, located not too far away from the Tokyo Station and Imperial Palace. The hotel occupies the 33rd to 38th floors of the towers, promising a vantage point for those looking to take in the incredible skyline of the city.

The entrance to the hotel is located at the ground floor itself with a small reception area to welcome guests. The incredible 250-year old camphor tree trunk used to make the reception desk speaks volumes about what I was set to expect thirty-three floors above. The lobby on the 33rd floor was stunningly large, with a ceiling nearly 30 meters above. The ceiling was designed to resemble a shoji lantern thanks to the translucent washi rice paper design. This set the mood for my entire stay there. It felt like a zen paradise nestled in the heart of a city, many feet into the sky. To reinforce this deliberate charm, the lobby also comprised of a reflective water pond, meditative rock gardens and an enchanting arrangement of ikebana flowers. This urban paradise offered a view to behold amid the bar and restaurant at one end and a library and cigar room at the other.

Let there be a television.

A deluxe room welcomed me with its 71 square meter expanse clearly making it one of the largest luxury hotel rooms in all of Japan. I had to ditch my shoes before entering the room but was thankful to slip into comfortable black cotton slippers, keeping in line with Japanese traditions. Aman is known to keep its hotel rooms minimalist and this was no exception. The wooden floor looked exquisitely polished and felt rather luxurious. The Imperial Gardens were visible from my room, fringed by the Tokyo skyline in the distance. This was one hotel experience where I’d rather spend hours with my favorite book, perched atop the seating area provided near the massive floor to ceiling window, which I came to acknowledge as my room’s vantage point.

Even the stone-finished bathroom with its inviting soaking tub presented a view to die for. Japan’s known for its innovatively modern and mechanized Toto Toilets. These opened up as soon as I stepped inside and offered a self-heating seat.

The Aman Tokyo treats its guests to a great pool experience. Stretched across a length of 30 meters, the basalt-lined pool lies under the tall ceiling that I began to gradually get used to. You could recline back on the daybeds and lose yourself to the tranquillity of the pool area while taking in the view. Don’t miss out on the steam rooms and baths that have a distinct local touch. As I sank into the comforting waters, the staff quietly placed a bottle of water, a wet towel and kimono-styled bathrobe on one of the lounging seats. The 2,500 square meter spa is one of the few delights of my Aman experience that I missed out on. There’s nothing going to stop me revisiting the property, just to experience this delight.

Aman hotels are not known especially for their food. However, Aman Tokyo had two restaurants with surprisingly refreshing offerings. The Restaurant by Aman is located near the expansive lobby. It features Italian Veneto cuisines as well as local foods. The Café by Aman offers French delicacies and is one of the first sights of the property you can catch at the ground floor.

Once you’ve done experiencing all the exquisiteness that the hotel has to offer, you can step out for a stroll into the Imperial Gardens. The hotel staff will graciously ferry you around in their minivans. I used one such to take me to Akihabara, the electronic mecca of Japan. In fact, even if you plan to move around the city in the subway, there’s a station right at the Otemachi Tower. 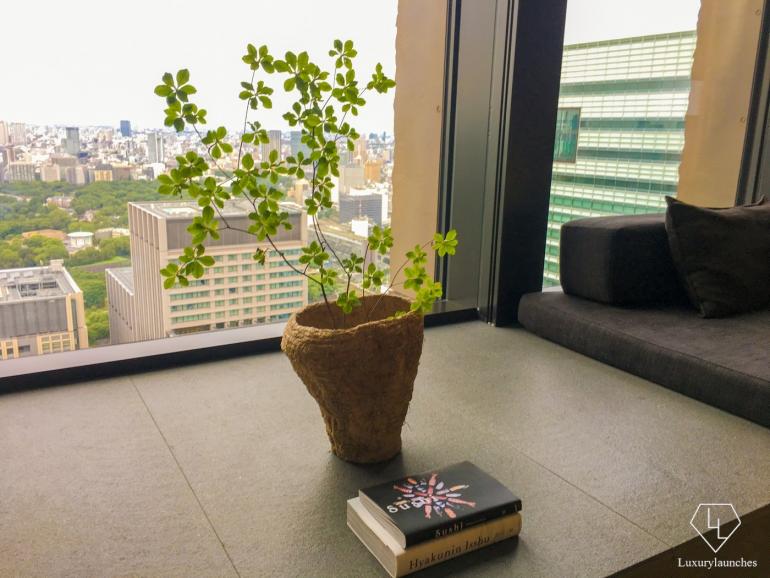 What impressed me greatly about the Aman Tokyo is that it caused something unusual for anyone visiting Tokyo. I made me want to stay in. It’s that brilliant intersection of an exclusive urban experience and traditional Japanese culture that make it a one of a kind, even for Aman standards.