Making an entry takes on a whole new meaning at the Ciragan Palace Kempinski Istanbul. You can arrive at the hotel in your BMW, a private yatch that docks on the sprawling property. Or how about landing on the hotel’s helipad? And that’s just the beginning. Read on and you’ll know exactly why this palace-hotel has been recognized as, “Europe’s leading hotel” by the World Travel Awards, for several years in a row. 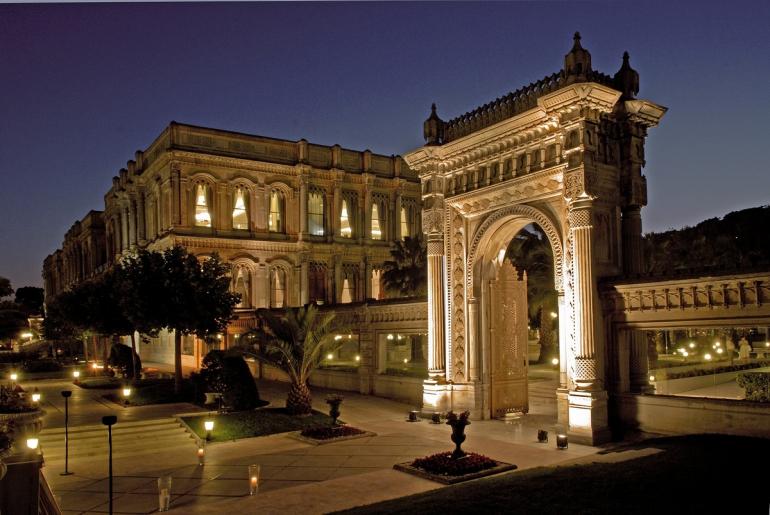 The Story :
This 17th century palace was the home of Ottoman Sultan Abdulaziz and was designed and constructed by the prominent Balyan family, an Armenian family of architects who worked for the Sultans. The Balyan family put it together with a great deal of attention to detail: Baroque-inspired interiors, hand-made carpets, crystal chandeliers etc.

But in 1910, a great fire destroyed the palace, and for years it lay in ruins. By the early 90’s it was carefully restored so as to resemble the original palace, while a new, modern building was also added. It remains today the only Ottoman palace-hotel on the Bosporus. Little wonder that this property is part of the exclusive Leading Hotels of the World portfolio.


The Abode :
As I walked into the imperial wing, I was taken back in time, to an era of opulence and grandeur. One can feel it in the expanse of space with the high vaulted ceilings, the wide corridors, the grand stairway, the elegant marble flooring, and the twinkling chandelier. The distinct Turkish influence is visible in the soft furnishings: hand-made carpets grace the corridors while intricate inlay work graces the walls. Even as I took it all in, I was hit by the sweet smell of roses that wafted through the air courtesy a gorgeous display of flowers. 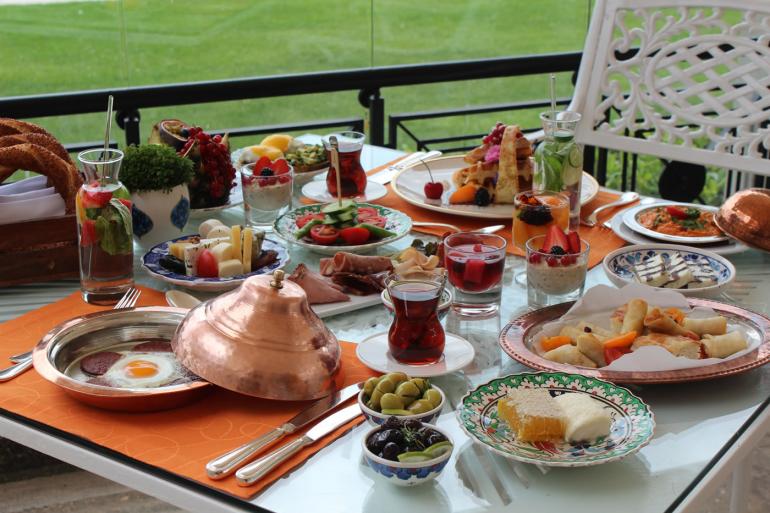 The imperial wing consists of 11 suites, each of which is fit for royalty. But the jewel in this crown is the aptly named ‘Sultan Suite’. Starting at over 30,000 Euro per night, this sprawling suite – one of the largest suites in Europe – comes with a large hall, a living area, two large bedrooms and bathrooms. Did we mention the 24-butler service? Yet it’s the uninterrupted view of the placid Bosporus that instantly wins me over. 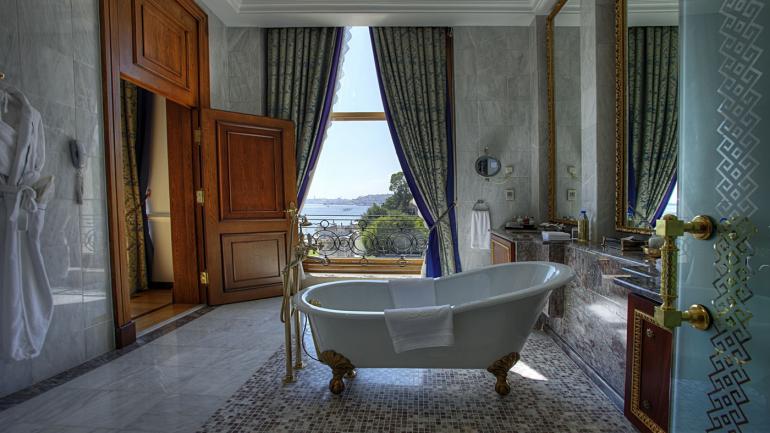 
The modern wing –
where I checked in – consists of 279 rooms and 20 suites. One can choose from 4 different categories of rooms and 5 different categories of suites in this wing. I checked into the superior Bosporus view room. Irrespective of which one you choose, you’ll find hints of the old blended in with the new: Turkish motifs sewed into hand-made carpets blend beautifully with a minimalist lamp-shade; a bedroom bench affords a view of the river which lies just beyond the see-through sliding windows.

All rooms and suites –
in both wings – come with flat screen TV’s, high speed internet, a choice of pillows, nespresso machine, minibar, etc.


The Food and Drinks:
Start with the breakfast buffet at the Laledan, which sits in the palace gardens. The restaurant serves over 300 dishes and 80 per cent of these dishes are crafted from organic ingredients. Don’t miss the organic honey. 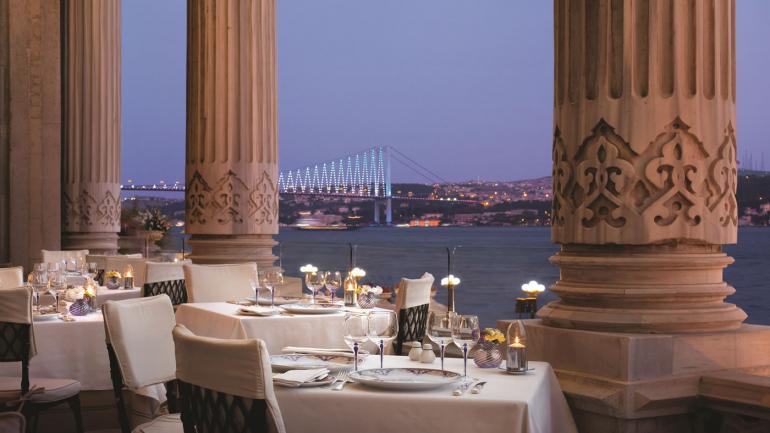 At Tugra you get a taste of a time gone by; Executive Chef Sezai Erdogan has taken inspiration for his menu from recipes recorded in the archives of historic sites such as Topkapi Palace. The Bosporus Grill comes with stunning views and delicious sea-food. 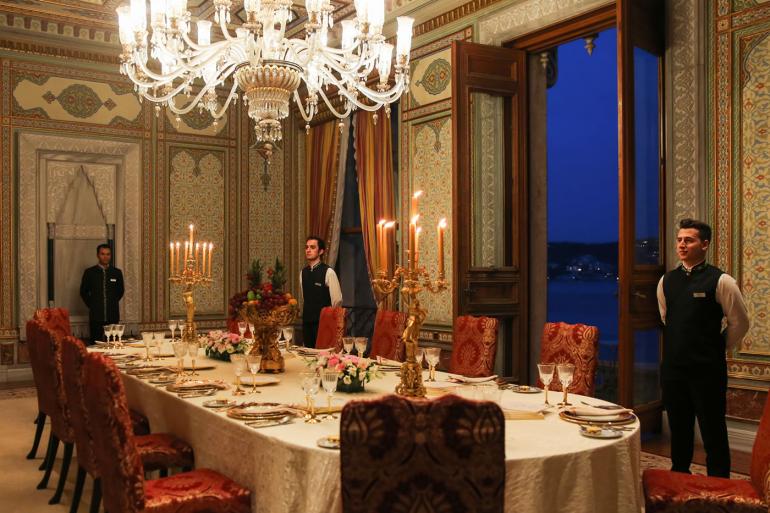 The Gazebo Lounge and Le Fumoir come with an informal yet elegant setting making them perfect for a leisurely drink, a few nibbles and a night-cap. My favourite dining experience was the ‘Sultan’s Dinner’, which is one of many culinary highlights at the hotel. We – a group of journalists and I – walked into a private dining hall in the Imperial wing. The table was set to resemble a scene straight out of 17th century Istanbul: polished silver-ware, candelabras, antique-looking plates, silver coffee sets, etc. Classical Ottoman tunes wafted through the air. Sherbet – a beverage loved by the Sultans – was served as the welcome drink, while recipes came sourced from historical archives.


The Spa :
The spa is managed by Sanitas and offers a host of treatments, including Ayurvedic massages. However, the most popular treatments are the selection of Turkish Bath Rituals. While each ritual differs in terms of use of oils, packs, massage techniques etc., each of them includes an authentic Turkish bath in the marble-covered hammam.
The Hospitality :
Subtle yet attentive. You won’t even notice the staff, but wear a lost expression – as I did – when walking the sprawling grounds, and a member of staff will materialise almost magically. 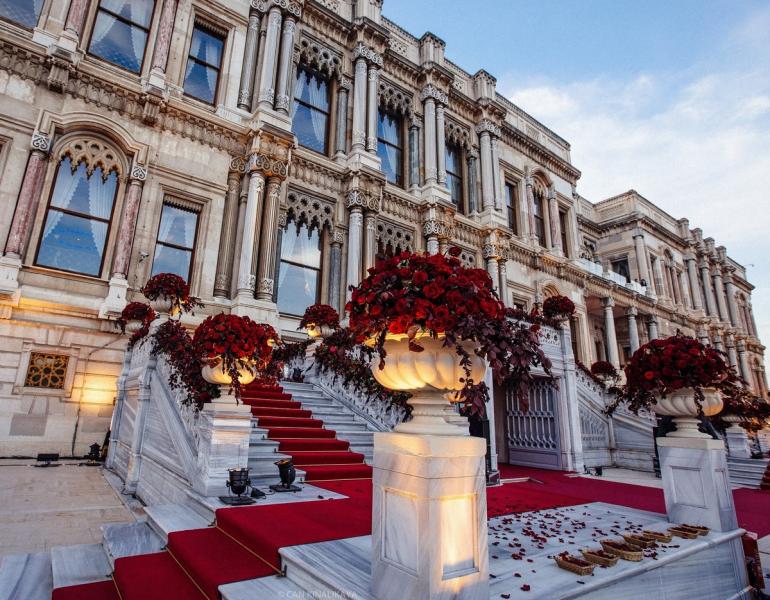 The Noteworthy :
Ciragan Palace Kempinksi Istanbul has been dubbed “Europes Leading Hotel”, by the World Travel Awards, for seven years in a row, from 2013 to 2019. (The winners for 2020 World Travel Awards have yet to be announced, as entries for the same are still open.)

The summary :
You experience the ultimate in luxury travel and earn bragging points when you check into this palace-hotel.

Note: The critic was invited by the hotel, but all views are her own.

The luxe factor is: