There’s a single staple the consummate traveller in us seeks in today’s times – unique experiences. And at the Narendra Bhawan, Bikaner, India, these are there for the finding at every step throughout our stay. Woven through the warp and weft of this luxury hotel’s DNA, we find scores of fascinating stories. A sparkling tale laced with humour here and one full of intrigue there. Through it all shines the spirit of the last reigning Maharaja of Bikaner HH Narendra Singh (1948-2003). Born into royalty at a time when the rule of the British Queen, as well as that of the feudal kings, was being replaced by Independence and the common man starting to find his own feet in free India, he was able to straddle both worlds. Narendra Bhawan does quite the same thing and dashingly well too. Jaipur-based designer Ayush Kasliwal collaborated with Narendra Singh’s daughter Sidhi Kumari several years after her father’s passing, reading his correspondence and looking at the family photos to understand the sort of man he was and imagine how he’d like his home to be represented when it was turned into this beautiful boutique property. Kasliwal has designed each of the categories of the 82 rooms in the hotel to symbolise various phases in Narendra Singh’s life. The Prince room that I’m in, taps into his flamboyant youth with jewel tones and plush fabrics; the Regimental rooms are more minimalistic, reminiscent of the man’s man he grew to be; while the Republic and India suites are architecturally modern, their Le Corbusier lines infusing Indian, natural materials, symbolic of his socialistic leanings post-Independence.

The wild side
While the building itself was built only in 1969, it reflects the traditional architecture of the local havelis, complete with red sandstone latticework and ornate jharokhas. The Goshala, the name of the al fresco sitting area at the entrance is a tribute to the erstwhile king’s love for animals (he passionately reared cattle and dogs), its wispy curtains and bougainvillea blend into the mood of the moment, be it a sunshiney breakfast or stylish pre-dinner cocktails. Similarly, the Diwali Chowk in the centre of the hotel, is a huge open-to-the-sky courtyard like all the local buildings have and is the perfect mix of sunlit nook and shaded retreat for those who seek serenity. These outdoors spaces draw from the best of old-world Rajasthan.

But the interiors, they are very different, a surprise at every step. It’s as though Kasliwal put on Alice’s whimsy-tinted glasses and decorated the entire property in the whirl of one magical afternoon! Gleaming chequered tiles, bright pops of colour, intriguing collections celebrating the mundane as well as the most outrageous objets d’art that the former owner picked up on his extensive travels around the world. Tropical motifs on richly woven tapestries, zig-zagging lines on floors, and Bombay fornicators in the hallways. There’s even a calico cat called Juju who appears and disappears from the backs of sofas like the Cheshire cat did from trees. And while we don’t get to play croquet with pink flamingos, we have a go at tickling the ivories on a stunning scarlet baby grand piano while we’re there. This beauty is inscribed with singer Edith Piaf’s name and her famous songs ‘La Vie en Rose’ and ‘Non, je ne regrette rien’ in curlicued script. Fondly called Edith, the lady in red sits at one end of the foyer that doubles as an informal reception area called the Verandah, which blends Bombay Art Deco elements, dramatic Broadway hues with gorgeous Rajasthani textiles and tapestries. This area has the dual concepts of a Diwan-e-Aam, where the Maharaja interacted with casual visitors, and a Diwan-e-Khaas, where special guests were entertained. This inner sanctum, filled with plush couches and scores of interesting geegaws that we wish we had more time to examine, is where guests are first ushered in for a confab with either Karan Singh, President of the MRS Group (which runs this property and the older one called Suryagarh in Jaisalmer) or Siddharth Yadav, who is Vice President. Dressed in casual Indian wear, these gentlemen-of-the-world set the tone for the place – sophisticated yet fun, friendly yet efficient. There’s no boring check-in to do while the bags make their way to the rooms. Instead, there is happy banter over hors d’ouevres and a refreshing locally-made jasmine drink laced with the men’s wildly wicked sense of humour. In keeping with the mood, leading off from the end of the Verandah, we spy their aptly named bakehouse – the Mad Hatter Café – with its quirky artwork and comfortingly sinful sweet treats.

The meditative side
A little later, the merry madness gives way to reveal Narendra Bhawan’s royal lineage, as we step into the tastefully ‘propah’ atmosphere of Pearls & Chiffon (named for true maharani chic), lovingly called P&C by the G&T set. This is where we enjoy our first meal at the hotel, a carefully crafted symphony of cloches simultaneously lifted at the exact same moment for each course to reveal the Rajasthani delicacies prepared to perfection and plated beautifully. We learn early on that meal times are of the utmost importance at this hotel, with each gastronomic journey being treated as a meditation that allows one to dwell deeply on the philosophy of the food and enjoy it in myriad ways. Whether it’s wholeheartedly Indian, classic European or evolved world cuisine, the chefs execute them all with expertise and passion. The choicest ingredients and the most exquisite wines feature at the table, guaranteed to make any gastronome happy.

We are invited to a wonderful wine-fuelled Literary Lunch that transports us to different eras and includes influential writers of the calibre of Sylvia Plath and James Joyce. The eloquent Yadav, who is leading this meditation, reads to us before the course that has been inspired by that particular passage. This way, course by course and chapter by chapter, we’re not only reading between their lines but having the words come alive on our tongue. It’s a heady experience and one that anyone who loves books and food will cherish.

Another memorable meal is the Museum Lunch hosted at Laxmi Niwas Palace nearby. This is part of the Royal Exploration, which traces the roots of Rao Bika, the first king of Bikaner with a visit to his humble home in this new place that he made a home. A far cry from the Gold Room at the ornate Laxmi Niwas Palace where we head for the Museum Lunch after soaking up royal memorabilia at the Sadul Singh Museum next door. Surrounded by 41 kilos of gold in an ornate, gilt-encrusted room that’s a feast for the eyes, we are served a multi-course luncheon reinterpreted from the original 1927 menu that we’ve just seen displayed at the museum! The British influence of the time is much in evidence as there’s everything from soup to fish to duck to meat courses. Unbelievably, this is followed by a full-fledged Indian thaali platter AND a dessert buffet! Truly a royal repast.

Can this extravaganza be topped? Well, they manage to match it splendidly soon after. Le Diner Dans Le Noir in the curtained Night Room takes away our sense of sight with a black satin blindfold only to allow us to savour the meal through our other heightened senses. When we have trouble finding our cutlery and wine glasses, a helpful hand guides us. But soon, we can feel our way around our plate and guess what the dishes are. Even for a seasoned food critic, it’s astonishing how much one relies on sight to identify the simplest ingredients, which often elude us until we smell them carefully and touch them with our fingertips. This sensory journey was a first for us and an adventure we wouldn’t mind undertaking again and again.

Speaking of adventure, their Merchant Exploration takes us through the bylanes of Bikaner, first to see the intricately decorated haveli homes of the Marwari merchants like the Rampuria family and then to actually step back in time into one of these! The day curated by the very capable Ram Sharan is a delightful blur of old temples, colourful markets, and interesting people. We get to meet the local dyers, the embroiderers, the pickle makers, and Vivek Tanwar of Chunnilal Tanwar Sharbatwale, who make cordials from flowers or spices such as cardamom and saffron. This is where the bela or jasmine one we had as a welcome drink at the hotel came from. We shop for the famous fried Bikaneri snacks called bhujiya (made with spiced chickpea flour) and sweet laddoos made of gond, which is an edible gum!

And then it’s time to unwind at a deliciously decadent Darbari night by the lake under the stars. On the outskirts of the city, the set up is redolent of royal hunts and camping done true Rajput style. The glitter from the mirror-encrusted white malmal sparkles like the moon reflecting on the ripples of the lake. The fire crackles on a cold night, giving as much warmth outside as the generous tequila shots with demerara sugar-laced orange slices do inside us. Meat cooked so well it slithers off the bone and vegetables so delectably smoked they taste like they’re fit for a king. The sonorous tones of a solo flute soaring through the scrub… it all makes us wish the magic never stops. 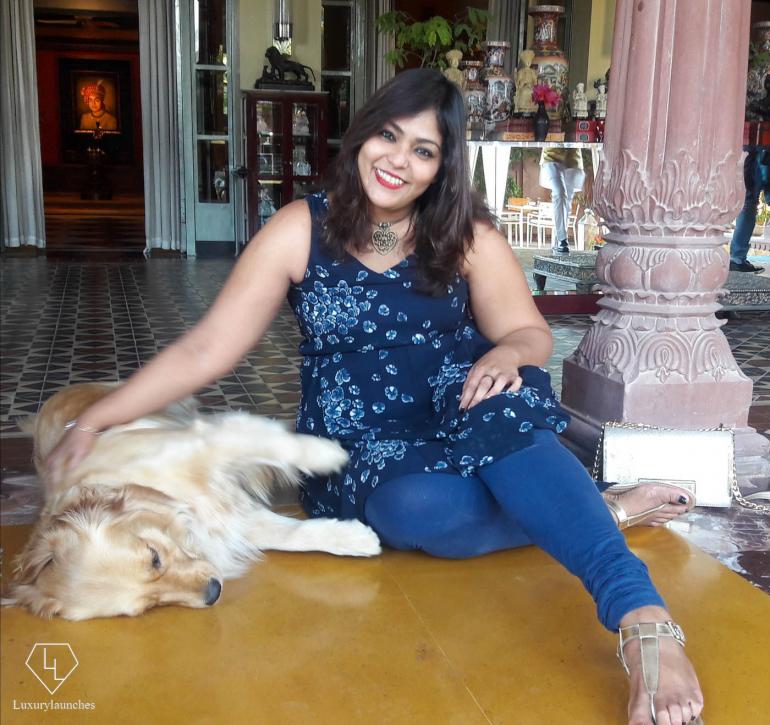 It’s eventually time to take leave of the lovely people and silky Golden Retriever Nahla (her sweet-tempered presence has been another highlight of our stay) and be driven to the Bikaner airport to board the convenient direct flight to Delhi, recently introduced by Air India. But the charm of Narendra Bhawan does stay with us and Bikaner beckons to us bewitchingly to return soon.

Note– The critic was invited by the Narendra Bhawan Bikaner. But all the opinions expressed herewith are her own.