If there ever is a road that has the same sheer as a polished, fine cut diamond, then Dubai’s Sheikh Zayed Road perfectly fit that bill. It appears like a studded necklace falling gracefully on a dame’s neck with tall buildings on either side of a 12-lane highway. SZR is considered to be one of Dubai’s most evident examples of growth and prosperity. Among the many landmarks gracing this iconic highway is the the Shangri-La Dubai.

The hotel is 14 years old and so has entered into the books of legends already. Dubai-cally speaking. It is situated in a most convenient and accessible position on the road. The fashion temple of the city, Dubai Mall is a stone’s throw away, as is almost any of the fun things a visitor looks to revel while in the emirate. The hotel offers free shuttle services to the Dubai Mall regularly. The International Airport is 15 minutes away (with no traffic) and the Dubai Convention Centre is another next-door neighbour. 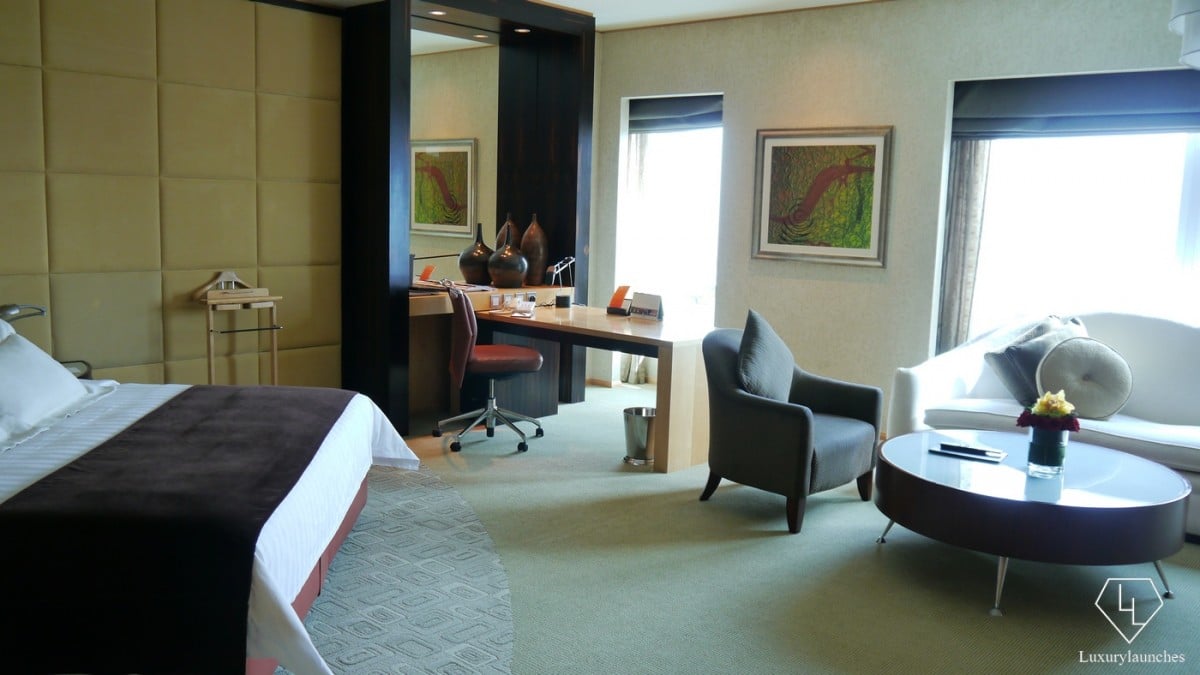 There are 42 stories with 519 rooms of which 302 are guest rooms, 29 suites, 126 serviced-apartments, and 62 residences. The Horizon Premier room that I was checked into, is one of the hotel’s largest non-suite rooms, located on the 40th level. It has impressive views of the Sheikh Zayed Road, as well as unobstructed views of the cloud-kissing Burj Khalifa. The interior is modernistic and spacious. An ideally placed work desk, with complimentary Wi-Fi combined with a spectacular view literally makes ‘work fun’. Along with the view the room has an added incentive in the form a TV. Yes, you read that right, but this one comes straight from the house of Bang and Olufsen, an HD TV that looks more like an art piece and comes with a motorised stand which can rotate, slide and move forward – all from the remote control. 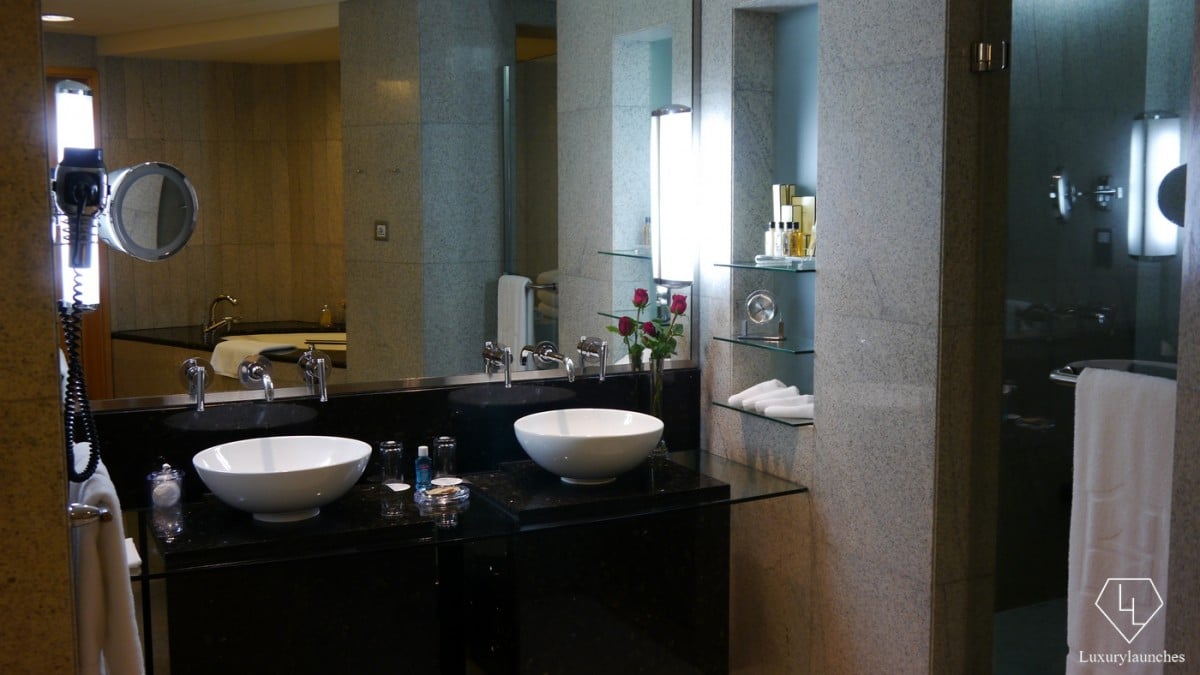 The hotel’s age was apparent in the décor, and more so in the bathroom. It isn’t really old school as much as it is loyal to tradition. A deep-soaking Jacuzzi tub, rainforest showerhead and L’Occitane toiletries are its other features.

Staying at the Horizon Premier we could enjoy better privileges and facilities, including exclusive, private check-in and check-out, access to the Horizon Club Lounge with complimentary all day refreshments, the private health club and indoor infinity pool. The Club was barren, however, with just tea and coffee with crackers available. This came upon as surprising because Shangri-La is hardly a brand that would ignore details. 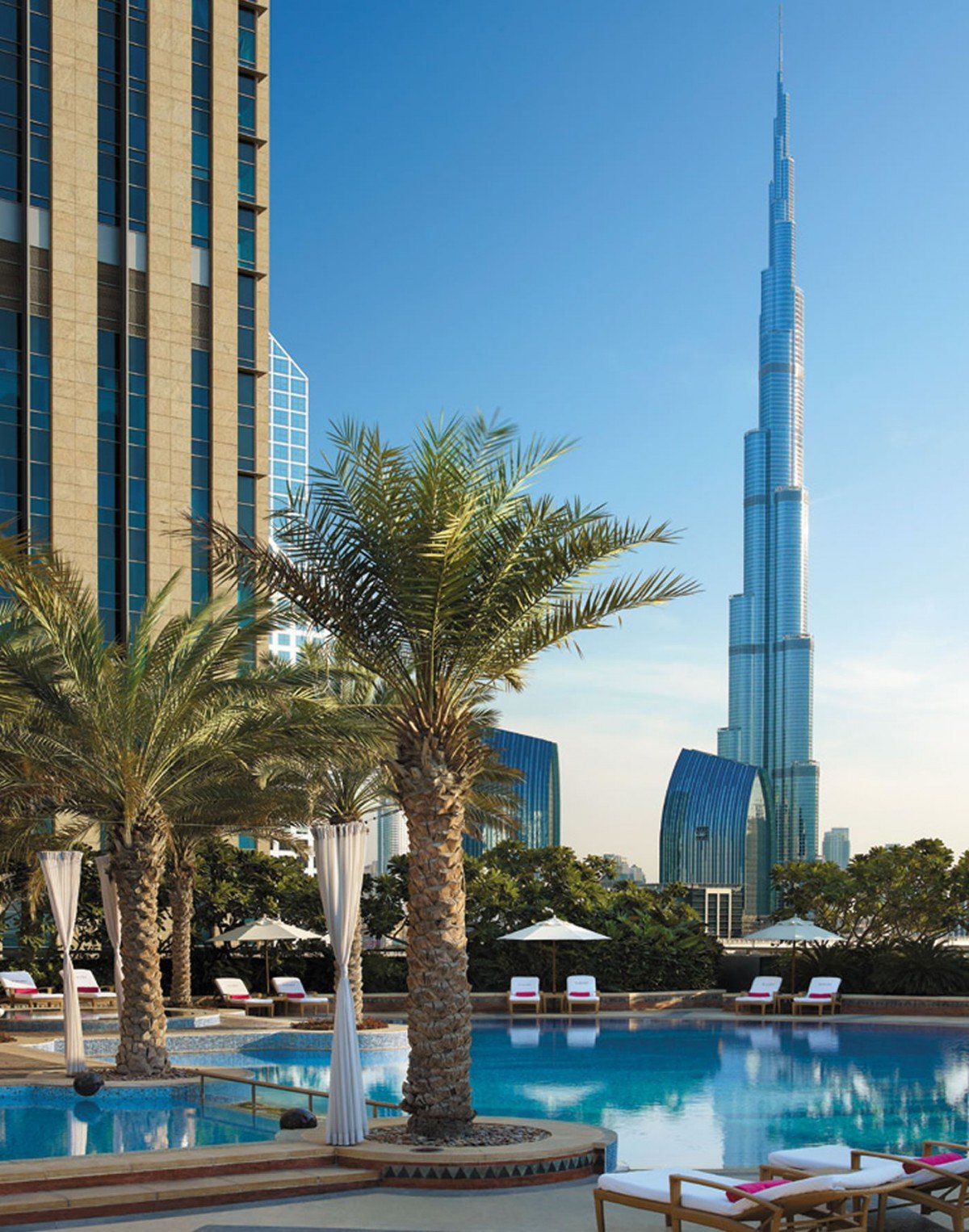 There was never a need to frown or fumble for anything as the members of staff are very friendly, prompt and ensure on making guests feel comfortable. The hotel has a second swimming pool on the fourth floor which is bigger although the 42nd pool scores higher for its spectacular views of the Burj Khalifa. Other facilities include a spa, fully-equipped health club, as well as tennis and squash courts.

Shangri-La makes no compromise over its F&B. There are plenty of dining options at the hotel, many of which are popular, award-winning venues. Dunes Café at the ground floor is one example. The all-day dining venue has a live open kitchen offering cuisines from all over the world. Our breakfast experiences were never disappointing, and short of exciting with such a wide spread of popular Continental, Arabic, Chinese and Indian dishes.

Hoi An offers Vietnamese cuisine and was chosen as best Pan-Asian restaurant in Dubai in 2014. Chinese fare is available at Shang Palace which serves authentic Cantonese menu. Peking Duck is highly-recommended if you would fancy a meal here. ikandy is an outdoor lounge, a common haunt of nightlife revellers of Dubai, especially for cocktails and shisha. During summer the venue is closed. Don Alfonso serves flavours from Italy’s Amalfi Coast in fusion with authentic Mediterranean treats. For a traditional Indian fare, Junoon is an option.

The crowning glory of the hotel’s F&B department, however, is The Act. While the menu is Peruvian, the venue is more reputed for being “world’s highest theatre club”. The Act hosts an eclectic mix of international performers is a venture started by Simon Hammerstein, a seasoned theatrical producer and artistic director. The Act in Dubai is the first one to open in the Middle East.

There are very few hotels in the city that can boast of a location and views like the Shangri-La Dubai. Add to this the stellar service and restaurants and you will almost forget about the room’s aging decor.