The vastness of Washington DC’s history is almost propelling. My choice of hotel essayed my love for American heritage and culture, hence my obvious pick was the Trump International Hotel. Only last year, the hotel was awarded one of the most prestigious hospitality awards there is – the Forbes Five Star Award. Nestled on 1100 Pennsylvania Avenue – equidistant from the White House and the US Capitol – the hotel is home to one of the most coveted addresses in the world. And so our adventure in one of the world’s most historically-inspiring cities began! 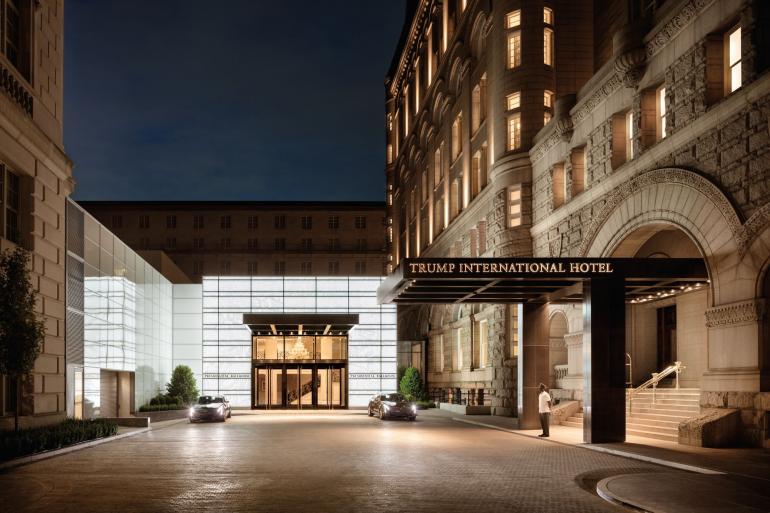 At First Glance
On my thirty-something minute ride from the Dulles International Airport to the hotel, my Uber driver exclaimed, “You stay at the Trump International Hotel, ah you must be fancy”. The statement immediately struck a chord with me as I engrossed myself into the history and heritage of the DC skyline. While most hotels chose the standard glass façade, the Trump International Hotel took inspiration from the undying history of Washington and remodelled the city’s old post office. Walking into the colossal lobby of the Trump hotel, my eyes lit up with the four ornamental chandeliers that festooned the space. The theme was plenty apparent – opulent and sophisticated yet simplistic. Suddenly I found myself surrounded by sleek-suited politicians and businessmen that submerged themselves in morning meetings involving political powerplays and talks about mergers and acquisitions – at least that’s what it felt like.

The Story
I had the opportunity to meet the Managing Director of the hotel, Mr. Damelincourt and quickly concluded that the hotel had one distinct mission in mind while expanding its portfolio to the city; location. The hotel occupies an enviable position only 600 metres from the White House. The twelve-storeyed clock tower – which is an integral element of the Post Office, and by definition the hotel – looms over the low-rise city and allows visitors sweeping views of DC’s skyline. As you walk into the lobby, one can immediately ascertain that the hotel has taken painstaking measures to maintain the essence of the old post office; especially the steel structure of the building and it’s neoclassical architecture.

Location, location, location!
For those of you who consider the location to be of paramount importance in Washington DC, I would highly recommend the Trump Hotel. The hotel has one of the best locations in DC, nestled only half a mile from the White House, the US Capitol and the Smithsonian museums.

Our Abode
On checking in at the lobby, we were delighted to know that we have been upgraded to the Premiere King Room, a 500 square feet space. The room is everything one can expect from a luxury hotel; high-thread count bed linens, a Nespresso machine and ultra-chic interiors. The royal colour palette of blues, creams and ivories embodied the sophistication of the hotel. The room was peppered with modern amenities like electrically-controlled sheers and USB slots by the bedside. The size of the bathroom was rather impressive, especially for what one would expect in a city like DC. A cavernous tub greeted my eyesight as I walked into the bathroom. The double vanities, dressed up with Natura Bissé Diamond Collection bath amenities, occupied centre-stage, while the shower populated the right corner.

The Spa
The first daughter’s polished taste and genteel style can be easily vouched for in the award-winning spa that occupies a prominent part of the lower lobby area. Indeed, no expense has been spared to cultivate this space into a wellness sanctuary for the rich and tired. The spa was brimming with unique elements like a Himalayan salt chamber, a manicure and pedicure studio, a waterfall and a candlelit relaxation lounge. There’s not much to say about the treatment rooms; they were pretty much what one would expect from a luxury spa. Our sixty-minutes couples massage was therapeutic and extremely relaxing after such an exhausting day. The therapists used a warm blend of oils to soothe our tired skin. What really stood out for me strangely were the changing rooms; while the men’s room was decorated with masculine elements like whiskey ornaments and watch catalogues, the women’s room was scattered with more feminine elements like roses and perfumes.

The Hospitality
The Trump Attaché is a service the hotel takes pride in; let’s just say it is their version of a butler on call. I must say it is unquestionably impeccable! The concierge team is also worth a mention. A slight error by the front desk in terms of service and we had ourselves a delectable platter of Middle Eastern sweets along with a handwritten note in our room. In all, the service at the property surpassed all my expectations.

The Noteworthy
Aside from my constant ranting about service and location, one of the cardinal elements that would draw me back to the hotel is the breakfast. Your morning meal at the hotel is nothing short of art; granted it is an a la carte menu but each dish is freshly made and plated with attention to detail. The hotel has forgone the concept of a buffet – rather unnatural for a luxury hotel. The menu may be limited, but each dish is a delicacy in itself. I ordered the granola with fresh and dry fruit, while my husband ordered Eggs Florentine – undeniably one of the best breakfast dishes we have relished.

The Food and Drinks
The food and dining options at the hotel are definitely noteworthy – especially the BLT Prime by David Burke – apparently the only restaurant in the city where the President likes to dine. The restaurant is a typical steakhouse and bar, housed on the mezzanine level of the hotel. There is a Starbucks located on the outer periphery of the hotel, which also lies adjacent to the clock tower entrance. I agree a trip to Washington DC comes with a rigid itinerary, but if you visit the city without a trip to the clock tower, I’d render it fruitless. The viewing deck is perched on the twelfth storey of the hotel, giving unprecedented views of every angle of the city. From the archetypal Lincoln Memorial and the White House, to the US Capitol and the War Memorials – you can get a holistic glimpse of American history from one rooftop.

The Summary
You may be loyal to the likes of Ritz Carlton and Four Seasons and mind you, they do have a presence on the DC circuit; but if you do not mind experimenting with a new hospitality brand, it is worth staying at the Trump hotel. With its superlative location, splendid service and sophisticated interiors, the hotel would always be my preferred choice while visiting Washington DC.

Note– The critic was invited by the hotel. But all the opinions expressed herewith are her own.