If you’re at The Westin Sohna Resort and Spa and through with the day’s doze of yoga, meditation, exfoliation (which we highly recommend), then there is another kind of relaxation I could propose, a quiet Xiao Chi experience. Now I’m in no way referring to some special sort of massage. Just to be clear. I’m talking about the restaurant that serves traditional recipes prepared in a modern style from China’s 8 diverse regions. Meaning “small bites” – Xiao Chi lies inconspicuously nestled amidst The Westin’s greens.

A dinner-only venue, its glass-encased elegance makes it a must-visit at the retreat. 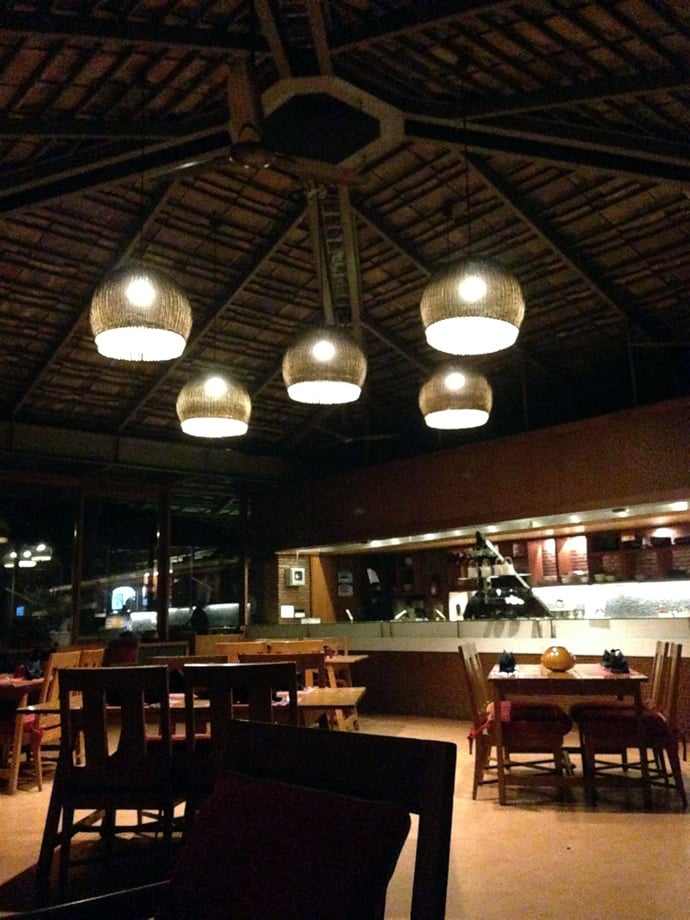 Now, to begin with, don’t you be fooled by the name! The place might mean “small bites” but it is probably also synonymous with “vast spread”. As I said earlier, menu at the Xiao Chi represents eight culinary traditions of China- Yue (cantonese): guangdong, Min: fujian, Xiang: hunan (can include xiangjiang region, dongting lake and xiangxi styles), Su (aka huaiyang cuisine): Jiangsu, Lu: shandong (include jinan, jiaodong styles, etc.), Chuan: Sichuan, Zhe: zhejiang (can include hangzhou, ningbo, and shaoxing styles). And while SuperFoods may be your go-to mealtime munchies at The Westin – and not without good reason – the venue is very much in line with the spa tradition, using only the healthiest, freshest ingredients. Don’t believe me? Just peek over the open kitchen counter then as chefs, steam and flame away for good measure. 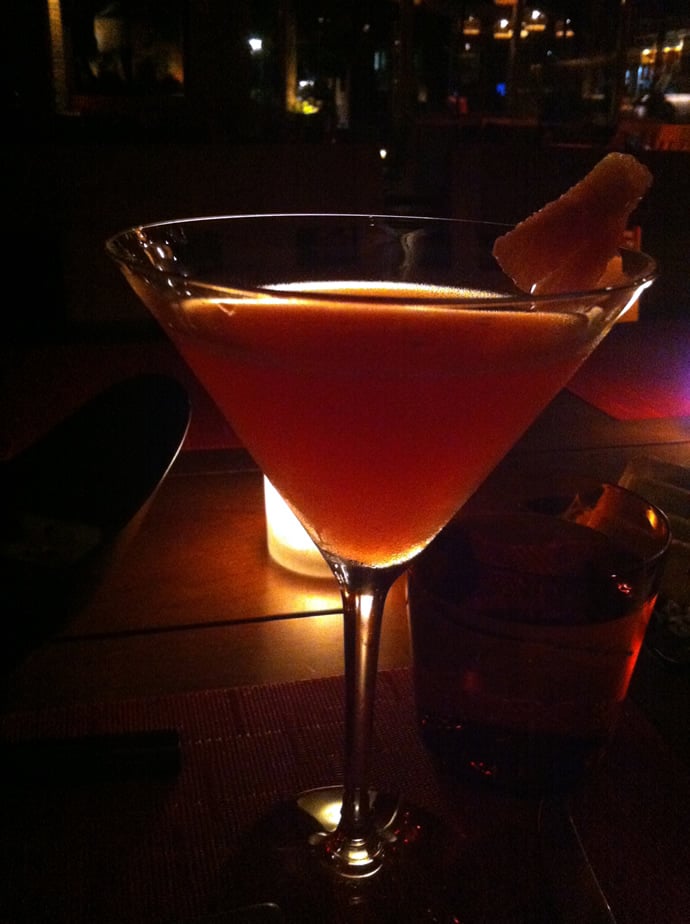 But aside from that counter the rest of its interiors almost take you down Chinese-cinema memory lane. With the exception of paper lanterns (they’ve done cane), the restaurant is reminiscent of a Chinese hut, only more lavish. And once we took in its ambience, which, wasn’t easy as the place is dim and by that I do not mean dim isn’t good (it was actually super calming), it was time for drinks! Now now, don’t get too excited. For one, they only serve two. Yes, a mocktail and the same vodka-spiked to make a cocktail. Although this is easily fixed thanks to The Living Room that sits right across from it. For another, and this is when you do not seek the service of the aforementioned’s bar- saccharine sweet litchi juice with an artificial coconut aftertaste. The signature drink came with a signature sweetness that was hard to swallow and had to be replaced. 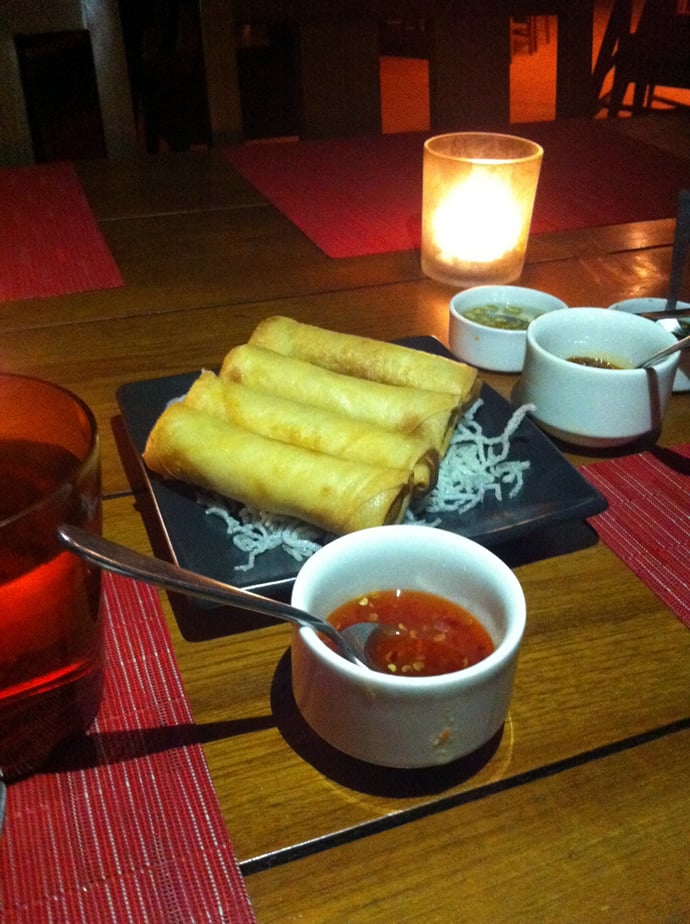 Luckily that wasn’t my drink. So while my friend grumbled, I offered him my highly sharing-friendly super-strong watermelon martini. Nothing more needs to be said. Next came the spring rolls. Now about that, them; what they lacked in taste, they made up for in size. I can’t say that’s an advantage. This however is- the complimentary yet thoroughly refreshing pineapple-cucumber salad! The sweet-sour flavorsome heap was the perfect accompaniment to our aperitifs. Along with five spice peanuts! Until the soup arrived, of course! Now that was a totally different silken tale. The Beijing chicken dumpling and pok choy soup has all the brothy goodness it promised. I’d say, skip that one-by-two on this one. And even on this- Zhong Shui Jiao. 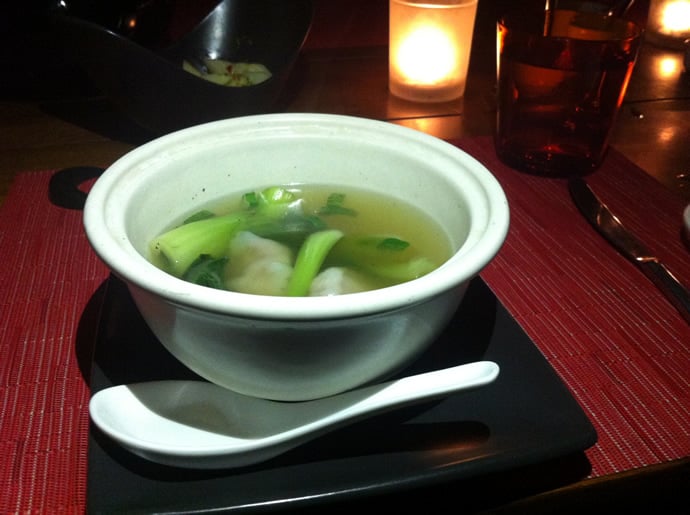 Meaty mounds of pork served with a side of “homemade” schezuan sauce, these dumplings were simply splendid.

The River sole fish fillet came a close second, especially when lending its meaty tenderness to the Yong Chow vegetable fried rice. The Hunan Chicken with dry chili and star anise laced with its dark soy what last remained of the rice after we’d demolished the fish. But besides these three, what came as a meal in a rather giant bowl was the Cantonese Hor Fen or flat rice noodles in a light garlic sauce with choy sum, mushrooms, carrot and baby corns tossed in. Slightly soupy and needing no mix matching of any kind, this is great for anyone looking for easy eating from the Xiao Chi kitchen. Especially if they expect to follow it up with some sinful (read: fried) indulgence. 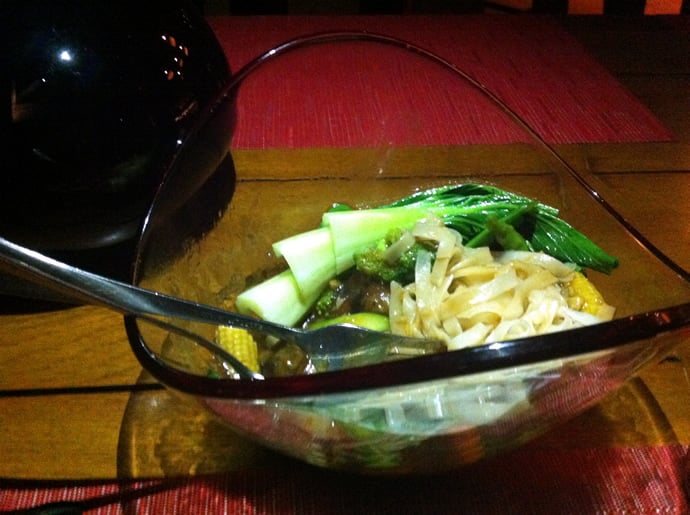 I say that because the Red Bean pancake (a first for both my friend and I) was a real red bean paste filled revelation.

Its hot, crispy outer layer and smooth contents when paired with Butterscotch ice cream made for a rather calorific yet worthy conclusion.

Although, fresh off the victory of our first dessert sampling we did give the conclusion a slight delay by ordering the chilled mango pudding. It was unusual in a gelatinous sort of way but surely not bad tasting. I do know that they use fresh mangoes when summer’s in so you should probably give it a try then. But regardless of what you try and when, the “Chinese hut” will always beckon. 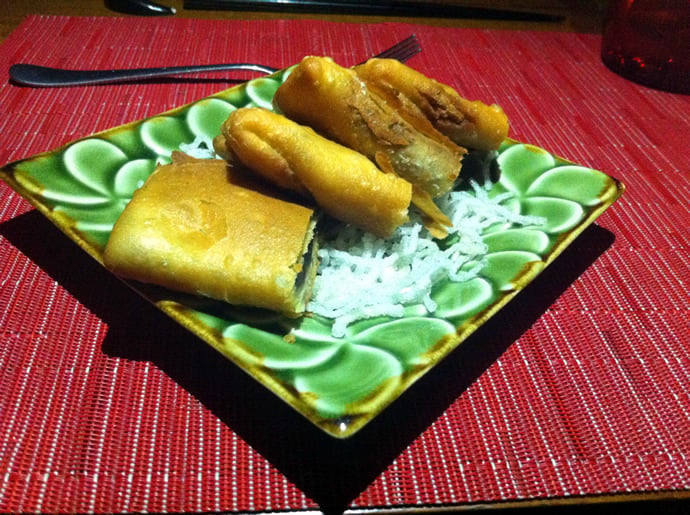