Ferrari has pulled the wraps off the new SF90 Spider, which is a drop-top based on the SF90 Stradale revealed last year. Just like its coupe sibling, the Spider is also an all-wheel-drive plug-in hybrid built on a platform evolved from the 458. However, it has a lot more than just the addition of a foldable roof. 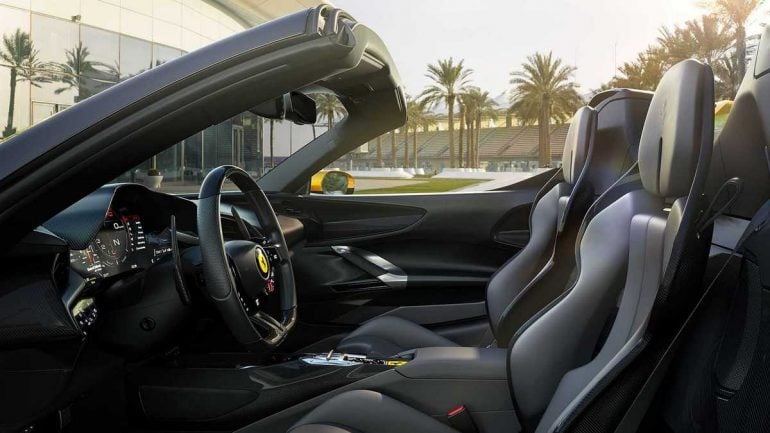 It’s the most powerful serial production Ferrari ever
Last year when Ferrari debuted the SF90 Stradale, the all-wheel-drive plug-in hybrid became the most powerful serial production model ever to be created by the Italian marque. However, Ferrari has bumped the power on the drop-top version to compensate for the weight increase. Just like the SF90 Stradale, the Spider variant is powered by Ferrari’s celebrated twin-turbocharged 4.0-liter V8 engine which is augmented by three electric motors. The V8 has been tuned to churn out 770hp, while the electric motors add another 217hp, taking the cumulative power figure to 986hp – that’s an increase of 14hp over its coupe sibling. 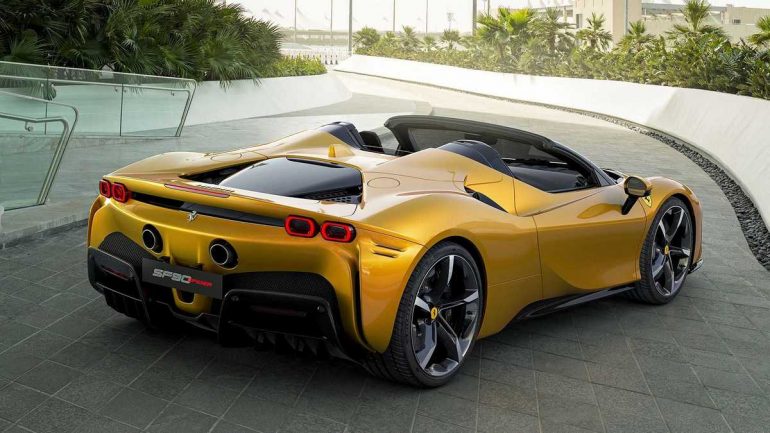 It’s just as fast as the Stradale despite the additional weight
It is a known fact that drop-top models are heavier than their fixed-roof counterparts, thanks to the folding roof mechanism and the additional bracing needed to maintain the structural rigidity of the chassis. The SF90 Spider weighs 220 pounds more than Stradale with a dry weight of 3682 pounds. Ferrari claims that 80 percent of the weight gain can be attributed to the foldable roof that takes just 14 seconds to deploy and just 20 percent to the “damping materials used to increase the rigidity of the spaceframe.” Despite that, the drop-top has performance figures at par with the Stradale. The Spider can accelerate from 0 to 62mph in just 2.5 seconds and hit a top speed of 211mph. 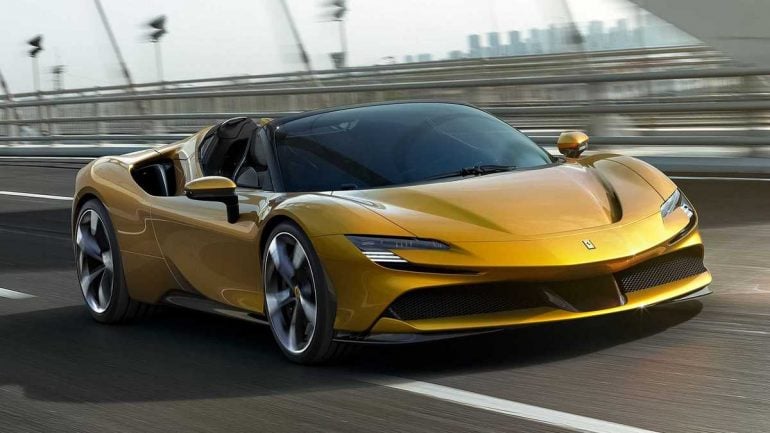 The Spider is equipped with Ferrari’s latest generation of rider assists
As the marque’s flagship model, one would expect it to come with Ferrari’s top-shelf electronics package and hardware. The SF90 gets Ferrari’s cutting edge electronics, which includes brake-by-wire control. The system electronically controls the bias between the car’s hydraulic braking and its regenerative setup, offering optimal braking performance. Ferrari says the system offers a 3 percent improvement over the traditional setup. Additionally, the steering wheel also has a dial that lets the driver choose between four riding modes. The eDrive mode, as the name suggests, is for all-electric operation, while Hybrid mode chooses an efficient combination between the V8 and the electric motors. The Performance mode prioritizes the V8 and Qualify mode extracts full power from the entire powertrain. 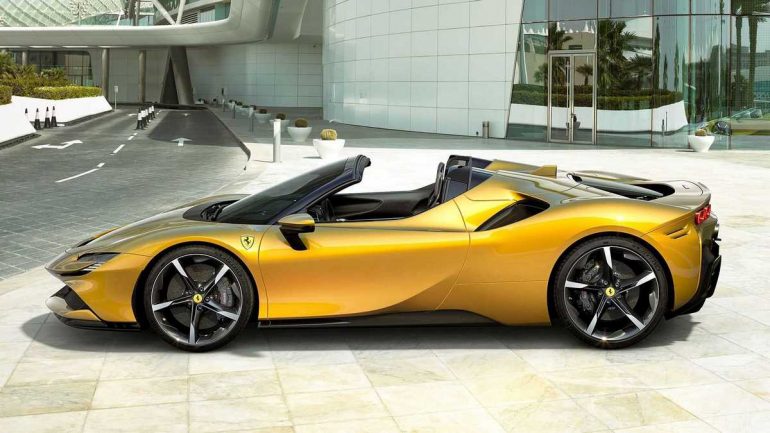 Even the newly designed wheels add to aerodynamic efficiency
Even by simply looking at the SF90 you’ll know that just about every design element for the model has been created for optimal aerodynamic performance. In addition to all the active aero component, even the newly developed forged wheels help the SF90 Spider in terms of aerodynamics. “This wheel is based on a very innovative system, which has been patented, that optimizes air flow and also reduces the pressure inside the wheel arches,” said Ferrari’s chief design officer Flavio Manzoni. “At the same time, it has been a fantastic opportunity to create a completely different design.” 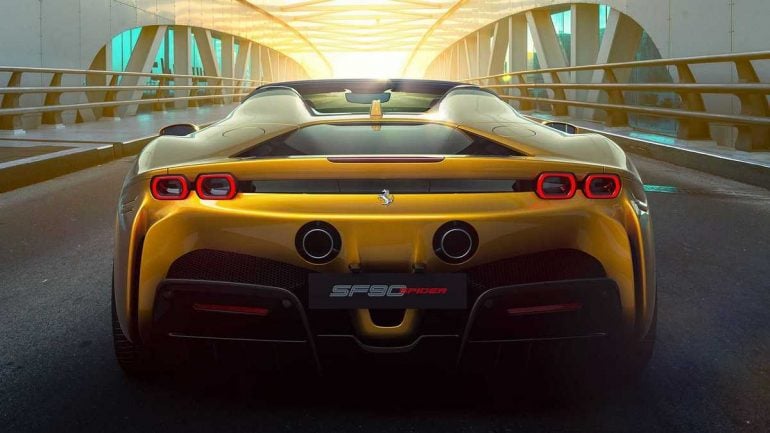 The SF90 Spider is even faster than the legendary LaFerrari
All the specifications and performance figures suggest the Spider is an incredibly fast car. Ferrari claims the Spider is only half a second off the SF90’s pace around the company’s Fiorano test track with a lap time of 1:19.5. What that means is it is two tenths faster than the LaFerrari on the same circuit. However, Ferrari is offering something called the Assetto Fiorano package for those looking for the best performance on racing circuits. The package adds motorsport-derived suspension components, Michelin Pilot Sport Cup 2 tires, and a 46-pound weight reduction with the help of lightweight carbon fiber and titanium parts. It also gets a dual-tone paint scheme to set it apart.