BMW has unveiled the refreshed versions of its luxurious 6 Series family for the 2015 model year that feature a host of subtle styling tweaks inside and out along with new standard tech. You might have to squint your eyes to detect the changes and styling upgrades as most of them are hardly noticeable. The biggest change for the 2015 model is a re-styled front end that looks a tad bit sharper than the current model. Other key exterior changes include new wheels, a “decorative surround” for the LED foglights, and a reduction of bars in the grille from 10 to 9. In addition, all versions get standard Adaptive full-LED headlights with a slightly more angular shape. They are joined by new side mirrors with integrated indicators in thin strips of lights. 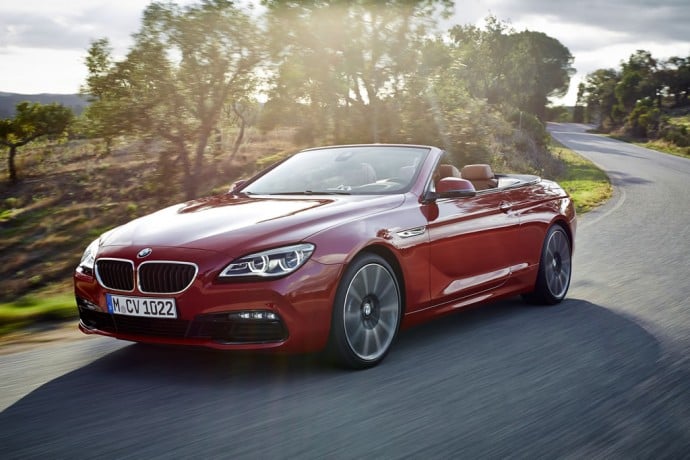 Buyers will get to choose among a palette of new colors including: Jatoba metallic, Cashmere Silver metallic, Glacier Silver metallic, Mediterranean Blue metallic and Melbourne Red metallic. The changes made to the interiors are equally subtle. Changes include high-gloss black trim covering the center console, and LEDs are used for some lighting. Navigation, heated front seats, two-zone climate control, dynamic cruise control and heated exterior mirrors all come as standard for all variants. Ivory White/Black and Cognac/Black two-tone Nappa leather upholstery have been added to the options list. Power from the engines stays the same, starting at 315 horsepower for the 640i and rising all the way to 560 on the M6 models. The 2015 BMW 6 Series Coupe, Convertible and Gran Coupe facelift models will make their debut at the 2015 Detroit Motor Show.