The all-new 2016 Audi A4 has been finally revealed, and it bigger, lighter and comes loaded with new technology. A couple of spy shots were released on the internet last week and we knew the design of the fifth generation model is evolutionary rather than anything revolutionary. Audi has stuck to the overall design that has worked very well for them all this while, although every panel has been redesigned. Yet, you can tell instantly that it is an Audi A4. The latest A4 B9 model is underpinned by a modified version of the chassis from the car it replaces; however, the German automaker has managed to shave off a sizeable 264 pounds from its overall weight. The new model is also the most aerodynamic car in its class, boasting a drag coefficient of just 0.23. 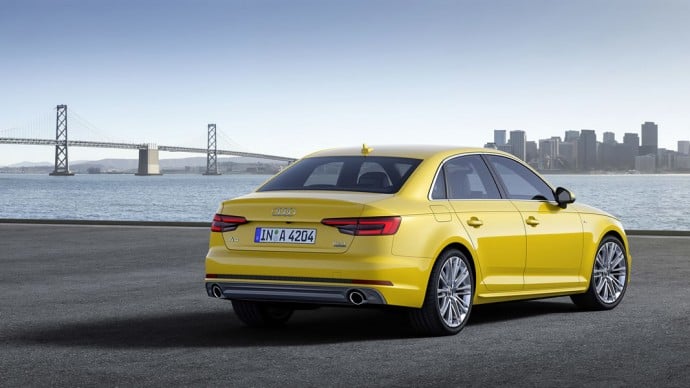 The biggest change comes in the form of a completely redesigned cabin that clearly looks more upscale and modern than the last A4. Audi has carried over many successful features from the rest of the line-up to the fifth-gen A4. It now comes with Audi’s Virtual Cockpit, first seen in the new TT. This system replaces the instrument cluster with a large LCD showing virtual gauges, navigation and other information. Audi has also has positioned its infotainment controls in the new A4 closer to the center console, similar to the current A8. You can rest your arm on the gear lever and still access all of the MMI functionality. The car also features the latest generation of Audi’s MMI interface, packing navigation, touch capability, LTE connectivity, and WiFi in the 8.3-inch color display.

The 2016 Audi A4 will be offered with three gasoline and four diesel engines in Europe. There is no word on the engine options that will come to the United States. Front- and all-wheel drive will be available, and for the first time, two-wheel-drive models will get a proper dual-clutch transmission. The new A4 will also offer a Traffic Jam Assist feature. At speeds less than 40 mph, the car can self-steer, using a forward-looking camera to recognize lane lines. Pricing for the 2017 Audi A4 will likely be announced later this year.