Range Rover Evoque is one of the most popular vehicles in the company’s product line-up. Introduced in 2011, Land Rover has sold more than 400,000 examples of the compact crossover making it the fastest selling Land Rover ever. In the last four years, it hasn’t received any substantial in terms of styling and other upgrades. Therefore, to keep interest alive and maintain its market dominance, Land Rover has given the compact the Evoque a few updates for the 2016 model. The British marquee has released information on the 2016 Evoque ahead of its world debut next week at the 2015 Geneva Motor Show. 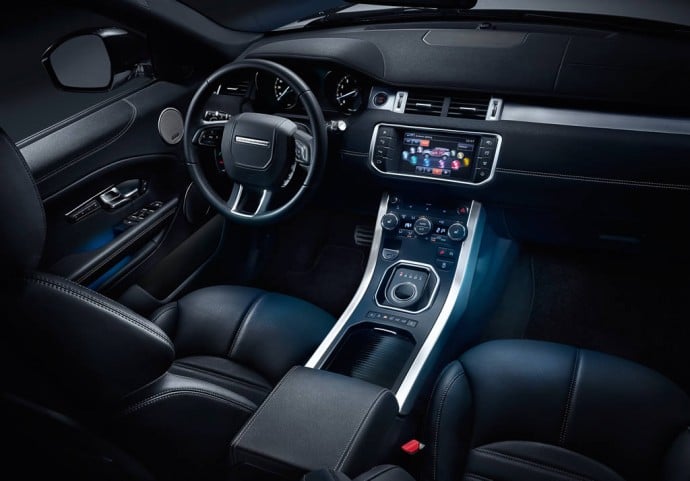 Understandably, Land Rover doesn’t want to mess up the current design, as it is still very popular and is one its strongest selling points. The designers at LR have kept the styling changes to a minimum and have instead focused on technology updates. The subtle changes to the exterior include a new front bumper, new grille, new wheel patterns, and full-LED headlights, the latter being a first for the Land Rover brand. As for the changes made inside the cabin, Land Rover has updated the Evoque’s interior with a new 8-inch touchscreen with swipe function. Seats and door trims have also been updated with new colors and upholsteries. Land Rover has also added a hands-free tailgate function where a wave of the foot at the rear of the vehicle can open an unlocked trunk. Lane-keep assist, automatic emergency braking and a drowsy driver monitor are also new. Jaguar Land Rover’s Ingenium TD4 replaces the old turbodiesel for 2016. That new 2.0-liter engine comes with either 150 or 180 horsepower and up to 68 mpg, according to Land Rover. Unfortunately, this engine won’t be offered in the U.S. Instead, the 2016 Evoque sold here will continue to be available exclusively with a 2.0-liter four which rates in at 240 hp. The 2016 Evoque will start rolling into showrooms in August.