Almost a month back, Aston Martin had unveiled the new 2007 Aston Martin DBS which will be driven by James Bond in the next 007 films, “Casino Royale.” It’s likely that if the vehicle ends up in the Bond movie or will make it to production too. As stated by a published report, DBS will be sold as a production car. It will be sold in mid-2007 and will not replace the Vanquish, according to AutoTelegraaf. In true Bond style, specific details of the new DBS remain top secret, although Aston Martin Design Director, Marek Reichman feels that it encapsulates a link between their elegant road car and the powerful race car. It is explosive power in a black tie and has its own unique character which will equal that of James Bond. For those of you wondering, Casino Royale is the title of the next Bond movie, which stars Daniel Craig, better known as Alex West, from Tomb Raider.

We have also mentioned earlier about the trademark Bond watch is also the talk of the town. The prestigious Swiss watchmaker has confirmed that the model featured in Casino Royale is none other than the Omega Seamaster 300 M Diver Chronometer.
The last Bond film, “Die Another Day”, featured Aston Martin’s flagship model, the Vanquish which is ever since ruling on the roads.
Related – Omega Seamaster 300 M Diver Chronometer the 007 watch 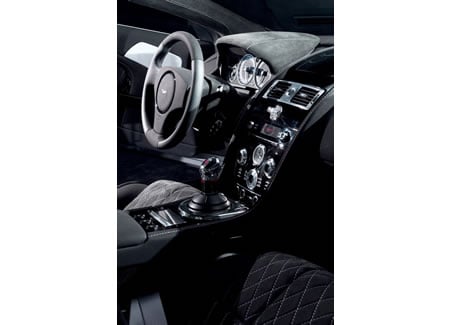