It’s not uncommon to see luxury cars zooming past on the roads of Moscow. Some study states that Moscow is the most populated with expensive cars city in Europe. You can meet them practically on every corner of Moscow downtown and Bentleys are much more common. I guess folks in Russia are earning well enough to afford the best of the best cars in the world. But the problem is not with the owners. It’s the Russian thieves that we are targeting here. Statistics say that at least seven of the luxury cars have been stolen in the Russian capital this year, including two in the past week. Only one is known to have been recovered. What are the police doing? The most recent victim is a woman in her mid-20s, who said her sky-blue Bentley Continental (valued at $340,000) was taken overnight from a parking space near her apartment building in central Moscow. 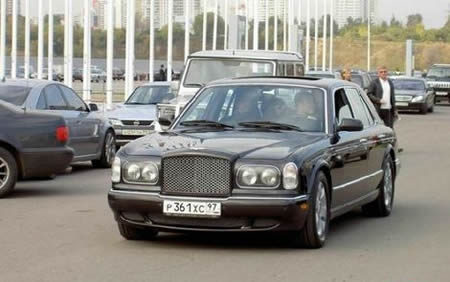 In 2003, Bentley opened its first showroom in Moscow and sold 40 cars that year. Today more than 1,300 are on the streets. Very impressive number!
Source