BMW has finally unveiled one of its most advanced research vehicles to date, a hydrogen fuel cell powered i8. The BMW i8 PHEV already looks like a car from the future but this concept version looks like a space-age muscle car thanks to its wicked bodywork. The prototype was presented at one of BMW’s ‘Group Innovation Days’ at its testing ground in France. Photographed for the first time, the vehicle is being used as a test bed for BMW’s hydrogen fuel cell technology, which is planned to be introduced into the automaker’s production line-up by 2020, according to the head of BMW’s vast research and development operations, Klaus Fröhlich.


BMW and Toyota formed a joint venture in 2013 to help BMW use Toyota’s fuel cell technology as a launching pad for its own research into fuel cell electric vehicles. The two-door prototype was built back in 2012, before the alliance between the German automaker and Toyota, but was kept hidden under a veil away at a secret location. Using the standard i8’s body and carbon fiber construction as a base, the unnamed prototype car is based on the same fuel cells, housing, and ancillary systems as the Toyota Mirai, although it also based on BMW’s 5 Series GT. The 1.5-litre three-cylinder turbo petrol engine at the rear is replaced by hydrogen fuel cell stack and the powertrain produces 242bhp. 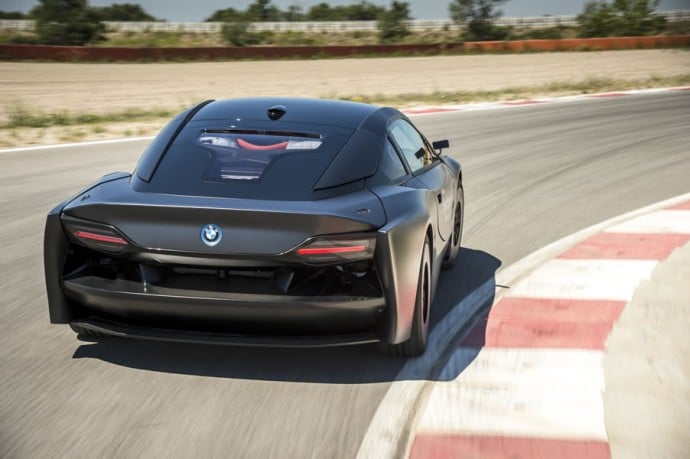 BMW claims a 0-62mph time of less than 6.0sec and top speed around of 124mph.The hydrogen is stored in a cryogenic storage tank where the electric motor’s batteries usually sit. “Fuel cell technology makes an ideal addition to both the BMW i models and, in the future, the series-produced models from the BMW brand,” says BMW. “Storing hydrogen in a cryogenic pressure vessel can, depending on the type of vehicle, allow an operating range comparable with that of conventional vehicles powered by combustion engines.”

Tags from the story
BMW, Prototype