BMW revolutionary iDrive infotainment system started a new trend in the automobile industry when it was introduced almost 15 years back; it ushered the age of smart technology in cars. The in-car multimedia system has gone through various upgrades in the past one and a half decade, but it is about to receive one of the most crucial improvement as a future upgrade. Along with a slew of new announcements at the ongoing 2015 CES Show in Las Vegas, the Bavarian automaker said it’s finally ready to embrace touchscreen and gesture control for its iDrive infotainment interface; a system they are calling BMW Gesture Recognition. All the Current BMW models use iDrive, consisting of a round control dial and buttons on the console and LCD display on the dashboard, for navigation, apps, hands-free phone and stereo features. The new iDrive system adds touchscreen capability to the LCD and a camera to recognize control gestures from the driver. 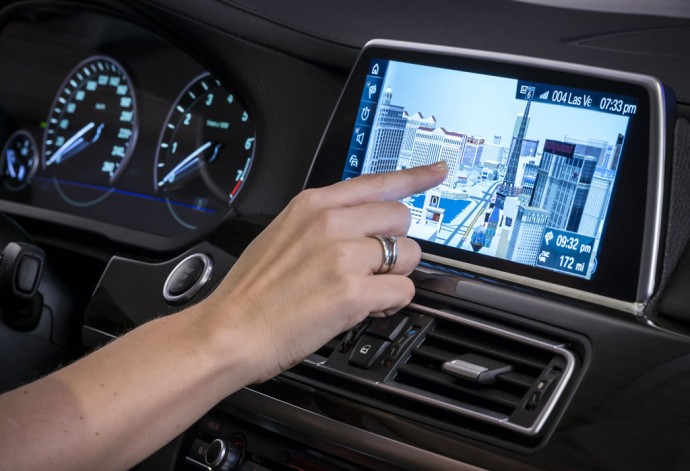 As demonstrated at the show, BMW’s latest iDrive retains the distinctive controller and BMW points out that one control doesn’t compromise the other. All the functions done by the touchscreen can be done with the controller and you can switch in between them for whichever functions you may be performing. This will make it a lot easier to make quick selections and simpler to alpha numeric inputs into the system. Many automakers have already adopted touchscreen technology for their infotainment systems, however Audi, BMW and Mercedes are still using indirect-touch controls. This upgrade to iDrive will make it a simpler to operate and more functional to use. Other major innovations announced by BMW at 2015 CES include more advanced self-driving car prototypes, laser headlights, wireless charging for electric cars and even a special BMW credit card that also acts as a key.

Tags from the story
BMW, CES