BMW has unveiled the X5 xDrive40e plug-in hybrid SUV ahead of its launch later this year. The production variant is based on the on third-generation F15 model and previewed by the X5 eDrive concept at the 2013 Frankfurt Motor Show and is also the first plug-in hybrid from the core BMW brand (which doesn’t include the BMW i sub-brand). The Bavarian automaker plans to have a plug-in version of every model in its range and we will soon see more plug-in hybrid variants of the regular BMW models joining the line-up. The X5 hybrid cranks out a total power output of 313 hp produced by a four-cylinder petrol engine with BMW TwinPower Turbo technology coupled with a synchronous electric motor. 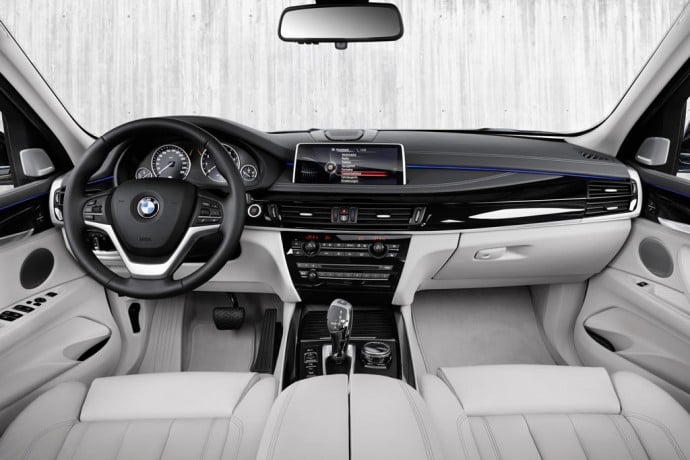 The 2.0-liter turbo four produces 245hp and 258 pound-feet of torque. The electric motor that is into the eight-speed automatic transmission contributes another 113 hp and 184 lb-ft. The combined power of the X5 xDrive40e is enough to propel the SUV from 0-62mph in 6.8 seconds and an electronically limited top speed of 130mph. BMW claims that it can travel up to 19 miles on electric power alone, at which top speed is limited to 75 mph. The lithium-ion battery can be charged by connecting to any standard domestic power socket or a BMW i Wallbox, as well as at public charging stations. The battery pack is located underneath the luggage compartment floor in order to save space. The BMW X5 xDrive40e also offers permanent four-wheel drive – even in electric-only mode – as well as dynamic damper control and self-leveling rear air suspension.