The Freestream T1 supercar project created by two former McLaren engineers has been bought out by automotive consultancy Caparo. Founders Ben Scott-Geddes and Graham Halstead, who worked on the famous McLaren F1 supercar and the Mercedes-Benz SLR, will stay with the project and if all goes well the quarter-million-dollar racer Caparo T1 might hit the roads by December. This two-seater is powered by a 2006-regulations style 2.4-litre V8 engine. Weighing almost 465Kg (the lightweight conferred by its carbon-fiber construction), it is said to result in a power-to-weight ratio of over 1,000bhp per tonne. Developed for road and track, the ultra-lightweight, 480bhp two-seater will offer a near F1 performance by shooting from zero to 100 mph in 5.0 seconds and boasts a top speed of 200 mph. It is predicted to be capable of 3g acceleration in cornering and braking. A few interesting design features include rear-view mirrors built into the front fenders, LED taillights incorporated into the rear wing endplates, a data acquisition system display in the steering wheel, and center-mounted coil-over-shock absorbers in clear view of the driver. 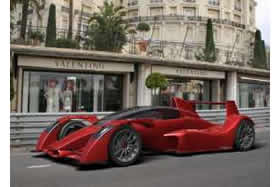 The team had planned to build just 25 cars per year but 20 of it have already been pre-sold, priced at around $250,000. Rumor has it that Stefan Eriksson is first on the waiting list.