Mercedes Benz has unveiled a self driving concept car at the 2015 Consumer Electronics Show in Las Vegas which the automaker is calling ‘F 015 Luxury in Motion concept.’ With the futuristic all-electric car, Daimler is offering a peek into how connected cars may be in the future. But, the F 015 Luxury in Motion concept, which is a fully-autonomous vehicle, isn’t just a car. In fact, it is a rolling luxury lounge. Powered by two rear-mounted electric motors with a total peak output of 272 horsepower (sustained output of 163 hp), the F 015 is said to sprint to 62mph in 6.7 seconds, while top speed is limited to 125 mph. The electricity is generated by means of a hydrogen fuel cell and the car also features a high-voltage battery that will provide short bursts of additional power. 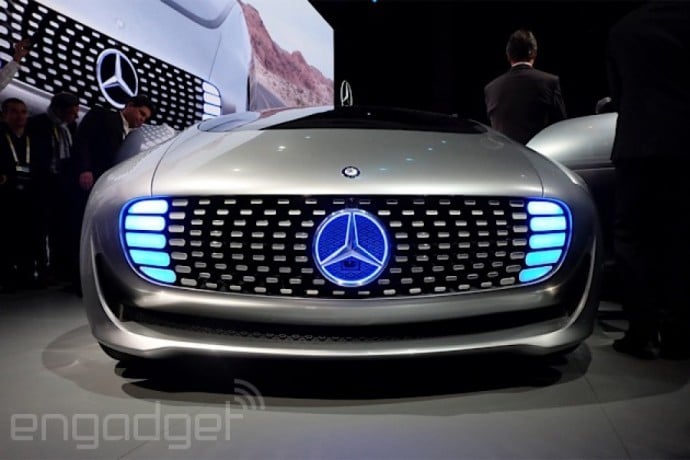 The massive sized F 015 Luxury in Motion prototype is rather light weight thanks to the use of composite materials including carbon fiber. The external design, which Mercedes describes as monolithic, is shaped to create roomy interior. Over 17 feet long, 6.6 feet wide, and 5 feet tall the sleek looking car is even bigger than the Mercedes Maybach. Additionally, the concept car takes the use of LED for lighting to a whole new level. It is swathed with massive LED clusters front to back which are color coded and change according to the driving modes. It can tell you whether or not it’s in autonomous mode, or give pedestrians a heads-up when it’s safe to cross. The interior is dominated by massive seats and feature all the luxury things you’ll expect from a top end model. The F 015 Luxury in Motion clearly isn’t going to end up at Mercedes-Benz at production line any time soon, but the automaker has got clearance to put it under trails at on public roads.

Tags from the story
CES, Mercedes-Benz