China is a world leader in innovation, and Red Rail, the first-of-its-kind suspended maglev (magnetic levitation train) line, is proof. A train that glides without electricity is stuff seen in Sci-Fi movies. However, with the sky train, engineers will actually keep the 2,600ft experimental track afloat without a power supply. This suspended train, located in Xingguo County, Jiangxi province, in southern China, operates about 33 feet above the ground at speeds of up to 50mph. It carries as many as 88 passengers.

The powerful magnets in the train are packed with rare earth elements, creating a solid repelling force that can lift an entire train car off the track. The excellent system keeps the vehicle floating indefinitely, even without power. Not only does this reduce dependence on electric power, but it is also much cheaper to build, with construction costing only about a tenth of that needed to create a subway, according to researchers at Jiangxi University of Science and Technology. 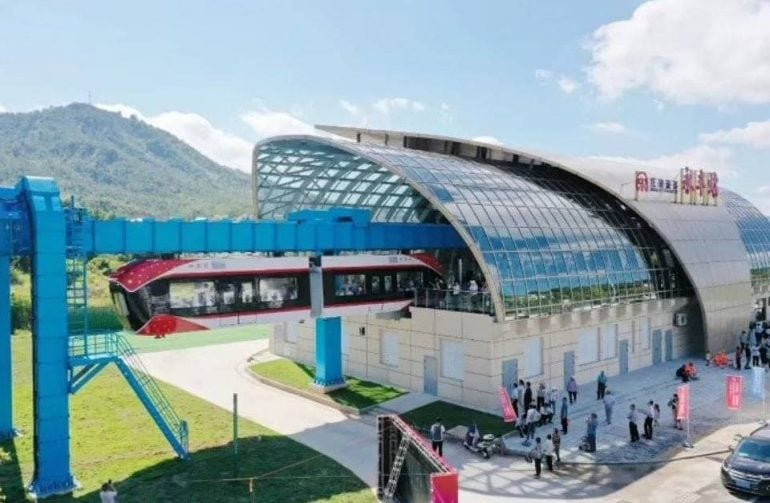 Recent testing of Red Rail was carried on a half-mile track featuring two cars. Slowly and steadily, the vehicle will be tested on a 4.7-mile track, allowing the fantastic Red Rail to reach speeds of up to 75 mph. Interesting Engineering made a good point that the Red Rail can be ideal for cities where noise pollution is high. It looks like there is no beating China, which has the world’s most advanced high-speed train infrastructure. The minerals found in the permanent magnets are only found in China, home to nearly 40 percent of the entire known reserves of rare earth elements.