Quick! Make a list of those brands/companies that haven’t offered you good customer service. Yes, now assemble all those things you have brought from them, either put them on fire or hire sledgehammer-wielding men to smash them to pieces! Doesn’t it seem like a great idea? Well, that’s what a wealthy Chinese Maserati owner resorted to! Yes, he did, and it’s no myth. Identifying himself only with his surname, Mr. Wang actually went on to hire four sledgehammer-wielding men to smash his $420,000 Maserati Quattroporte in protest to poor customer service. And that, too, after having gathered a crowd just outside the opening of an auto show in the eastern city of Qingdao in Shandong province! The result was ‘a crippled vehicle’ (as opposed to the Maserati Quattroporte) with shattered windscreen and mirrors, the grille broken, and dents on the bodywork. All this draped in a banner accusing the Italian manufacturer. Well, that’s quite an expensive protest, don’t you think? And with all the press coverage this news has been getting, I’m sure Maserati has its ears and eyes open and has got the “underlined” message.

And of course, it has, coz’ it seems Qingdao’s authorized Maserati dealer responded on China’s Twitter-like Sina Weibo saying: “We deeply regret that before the two sides could reach a result via negotiation, the vehicle owner… smashed the world-famous car in public… to cause a sensation.” 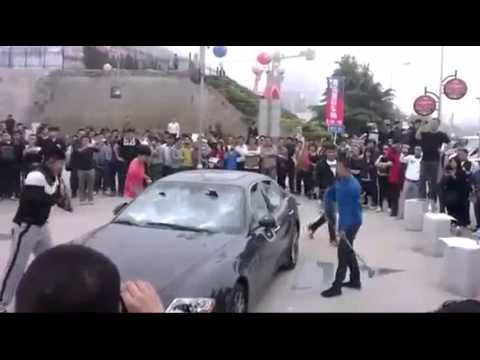 Sources reveal that Wang purchased the car in 2011 for $420,000. He first started experiencing problems when he took the car to the dealer for an “unspecified repair,” wherein instead of using the same parts, Wang was made to pay for new ones. Moreover, he claims that Maserati failed to fix the problem and “scratched the vehicle.”

We’ve heard that similar actions have been taken by buyers displeased with poor service. But is smashing the car the right way to go about it? It’s extravagant for some and others???…..