Ferrari has expanded its line-up an all-new mid-engine Berlinetta that swaps out the marque’s famed V8 engine for a downsized V6 which is assisted by an electric motor. Behold the 2022 Ferrari 296 GTB, the Italian brand’s first ‘mainstream’ hybrid car which sits below the SF90 Stradale in the product portfolio. It has been added to the line-up to complement the traditional V8-powered F8 Tributo which goes out of production in 2022. The US pricing is yet to be announced, but it has a starting price of 269,000 Euros in Italy, which roughly converts to $321,000. Ferrari says the deliveries will begin in the first quarter of next year. 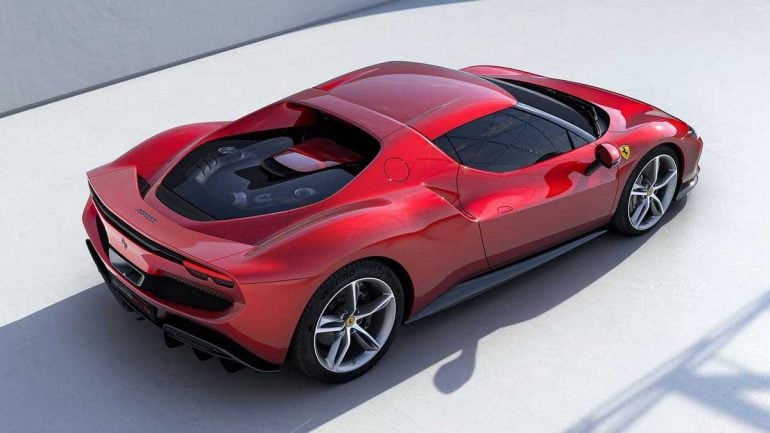 Design
Ferrari says the 296 GTB represents the latest evolution of its mid-rear-engine two-seater supercar and it “redefines the whole concept of fun behind the wheel.” The overall design of the new Ferrari closely resembles the bigger-sized hybrid supercar in the line-up, the SF90 Stradale. However, the famed Italian marque gave the 296 GTB cleaner lines and styling elements that make the whole design look simple and clutter-free. The front is dominated by sleek headlights with tiny DRLs and a wide mesh grill sitting below. At the back are SF90-inspired square tail lights that are topped by two LED bars and a massive single-exit exhaust in the center that really looks great. Overall, the Ferrari 296 GTB’s styling looks like a modern rendition of the classic Berlinetta design that might remind you of the iconic Dino. In fact, Ferrari took some design inspiration from the iconic 250 LM for the styling of the 296 GTB. 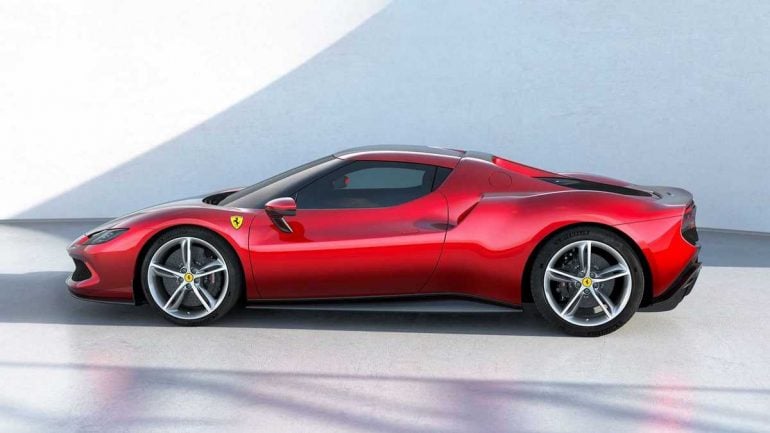 Aerodynamics
The 296 GTB is the first mid-engined sports car in Ferrari’s history to come equipped with an active aero device for generating downforce rather than mitigating drag. The active rear spoiler integrated into the rear bumper is based on that used by the LaFerrari. According to the Italian manufacturer, the active spoiler can generate up to 360kg (roughly 794lb) of downforce at 155mph if the supercar is ordered with the optional track-oriented Assetto Fiorano package. The extreme performance package includes things like multimatic dampers, carbon fiber elements on the front bumper, rear bumper, rear deck, and the interior along with a Lexan rear window. Even without it, the 296 GTB produces 100kg (220lb) of downforce more than its predecessor. Ferrari also employed several downforce-enhancing tweaks on the 296 GTB to enhance its aerodynamics, including the ‘Aero’ brake calipers inspired by those on the SF90 Stradale and the small air intakes at the front that help in efficiently channeling the air. 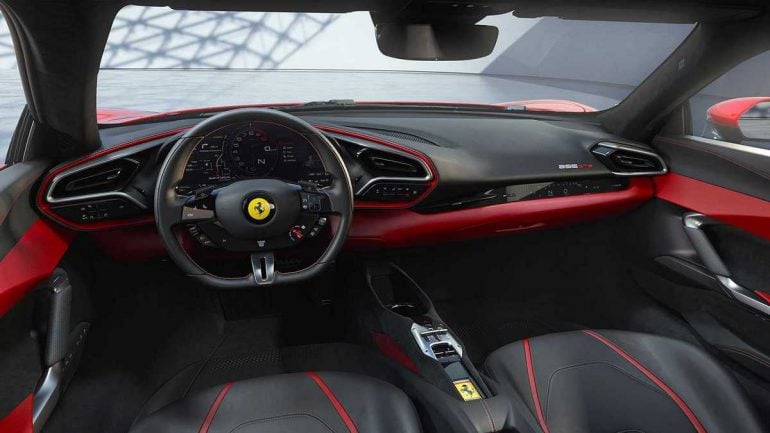 Interior
Just like the exterior, the 296 GTB’s cabin design has a strong resemblance to that found in the SF90. Even SF90’s gear selector which resembles the gated manual design of classic Ferraris finds it was into 296 GTB’s cabin. Ferrari says the tech-heavy cabin of the 296 GTB represents “a clear break from the past.” 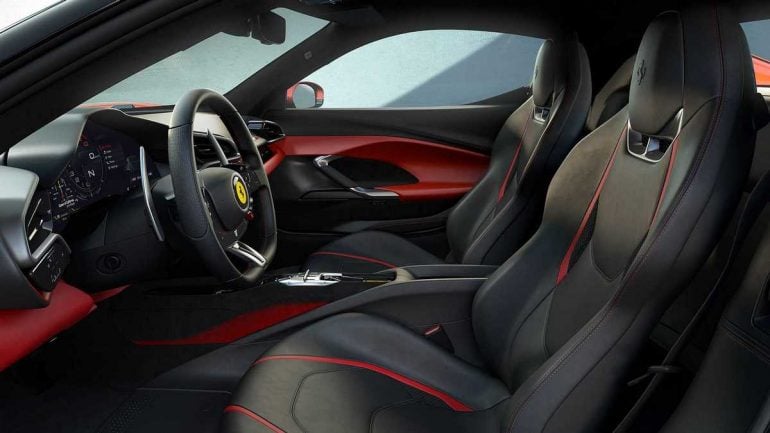 The fuss-free interior features a curved instrument console with a digital dash in the center flanked by two capacitive touch panels on the sides. The passenger also gets an individual screen that can be customized to display different information. 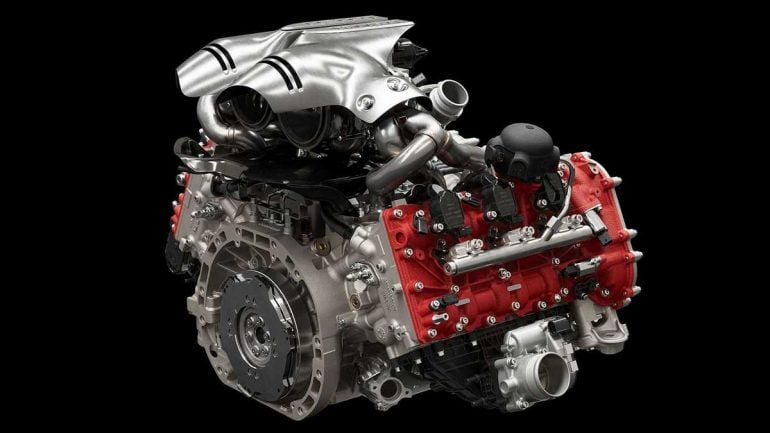 Hybrid powertrain
The highlight of the new Ferrari 296 GTB is its new plug-in hybrid powertrain. At the heart of the hybrid powertrain is a V6 engine, making the 296 GTB the first-ever road-going supercar with the Prancing Horse logo to feature a six-cylinder. The last time Ferrari made a V6-powered road car was more than 40 years ago, but it was sold under the now-defunct Dino sub-brand. The 3.0-liter twin-turbo V6 is an all-new and bespoke engine developed in-house by Ferrari and is a result of the Maranello-based manufacturer’s downsizing efforts to meet emission regulations. The V6 has a 120-degree configuration with the turbochargers placed between the cylinder banks – a first for Ferrari. 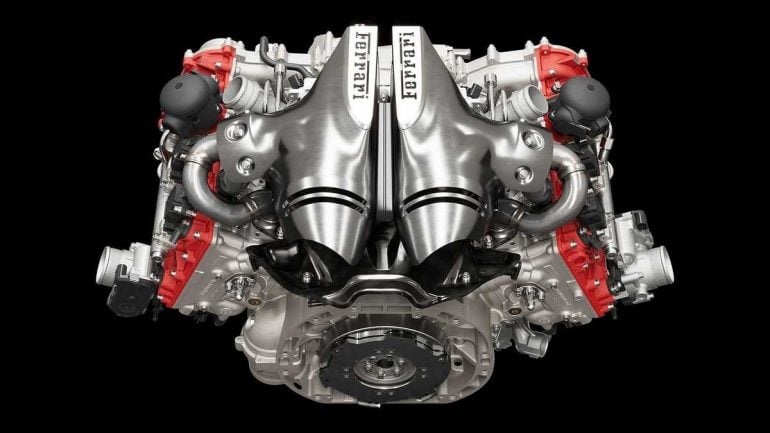 Placing the turbochargers inside the V not only makes the unit much more compact but also reduces lag. Ferrari says the turbos can spin up to 180,000rpm. The V6 is assisted by an electric motor wedged between the engine and the eight-speed automatic gearbox draw and draws from a battery pack with just under 7.5 kWh. It’s also for the first time Ferrari has made a rear-wheel-drive hybrid sports car. Ferrari also worked extensively on the sound of the V6 and engineered it to emit “the harmony of the high-frequency notes of a naturally aspirated V12.” 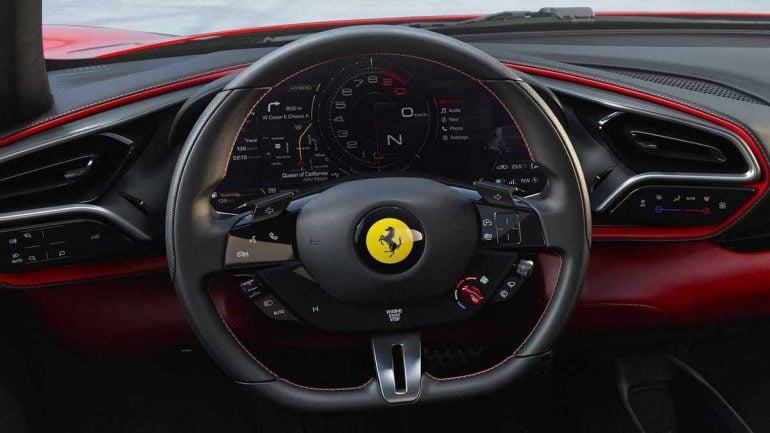 Power and performance
The relatively small 3.0-liter V6 engine is surprisingly potent. It is capable of producing 654hp and 546lb-ft of peak torque. Ferrari claims is the highest specific output for a production car: 219 horsepower/liter. The electric motor adds another 165hp, taking the total output to 818hp. Ferrari claims the 296 GTB can do the 0-62mph sprint in just 2.9sec and hit a top speed in excess of 205mph. Just like the SF90, the 296 GTB eDrive mode can be used to drive the supercar on electric power alone for up to 16 miles and at speeds of up to 84mph.

Tags from the story
Ferrari, Hybrid