For me Ferraris look the best when they are red; they just don’t appeal to me that much in any other color. But that perception is gone now; just look at it! It’s the Ferrari 458 Speciale A and it is stunning! Surprisingly, Ferrari is not calling it spider and the ‘A’ in the name stands for Aperta or “open” in English. It’s also limited to a scant 499 cars. The convertible model is one of the pre-Paris motor show reveals we have seen so far. What has made us more exited is that fact that fri is claiming that this model is their most powerful droptop production model ever. That is thanks to the same 4.5-liter V8 from the hardtop Speciale, with 597 horsepower and 398 pound-feet of torque. 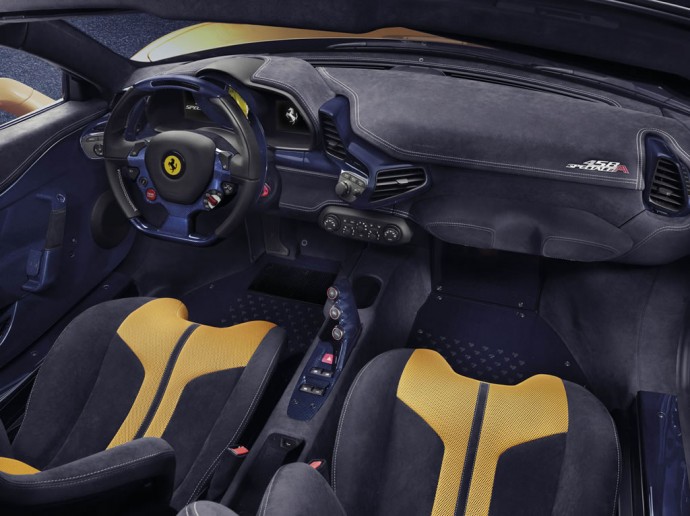 The 458 Speciale A that will debut at the Paris Motor Show will wear a yellow body with a Blue Nart and Bianco Avus stripe running from nose to tail which has been done tastefully. The cockpit will have a matching yellow color for the seats along with Alcantara. The door panels, center tunnel and tread plates will be covered in blue carbon fiber. The convertible setup hasn’t changed much in terms of the performance; Ferrari claims the setup adds about 110 pounds (50 kilograms) to the overall weight and takes 14 seconds to operate the roof. Acceleration to 62 miles per hour is reported at 3.0 seconds, about a tenth slower than the coupe, and the Aperta can hustle to 124 mph in 9.5 seconds.