Dassault finally rolled out its highly anticipated Falcon 5X on 2 June, which according to the company establishes a new benchmark in the large cabin, long-range business aviation market. The veil was lifted at a dedicated ceremony at its 64-year-old final assembly facility at Bordeaux-Mérignac airport in southwest France in front of an audience of 400 customers, operators, suppliers, and certification authority representatives. At the launch event, Dassault Aviation chairman and chief executive Eric Trappier declared that the large-cabin, long-range aircraft was not only a “game changer” in this niche and nascent sector but also marked the first of a family of new-generation wide-cabin business jets from the French airframer. 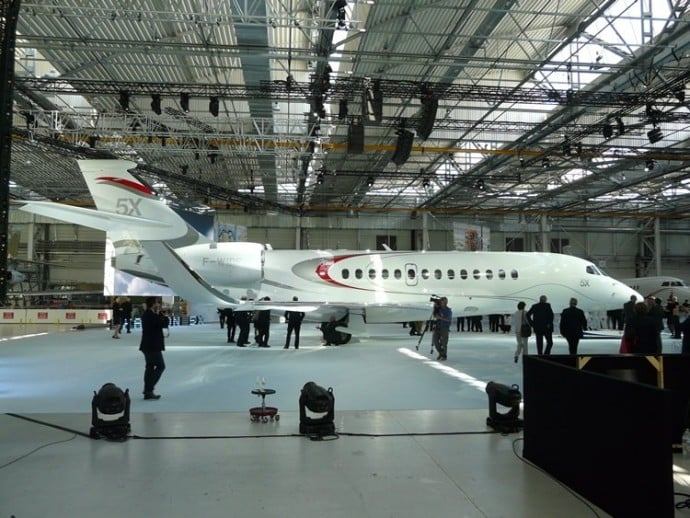 The Falcon 5X offers a large cabin cross-section for a purpose-built business jet, and its 5,200nm (9,630km) range will permit it to connect the majority of the world’s most heavily travelled city pairs. The twinjet is not only more fuel efficient, it also features an approach speed of 105kts – down in the turboprop range – offering more airport options for business jet operators. With a fuselage diameter of 2.7m (8.9ft) and a cabin height of 1.98m, the 16-passenger 5X is the largest aircraft in Dassault’s six-strong high-end business jet family and boasts the widest cabin cross section of any traditional business jet.

The first 5X was powered up and started system ground tests last autumn. It was joined by aircraft no. 2 earlier this year. Testing on the global simulation bench, which replicates the 5X’s main systems, is well advanced and the static and fatigue test campaign on a dedicated airframe has begun. The aircraft’s maiden flight is anticipated before the end of the summer.