George Lucas’s devotion to timeless storytelling and cutting-edge innovation has resulted in some of the most successful and beloved films of all time. Lucas’s films (like Star Wars) celebrate the boundless potential of the individual to overcome any limitations – something he firmly believes. He now has another starry reason to celebrate as he is the first owner of the first road-legal Mosler to be delivered to the U.S! Dubbed the MT900 GTR, the first demonstrator is cooked and ready to drive. While Mosler’s burn up race tracks the world over, this is the first street-legal model delivered to the roads of America. Mr. Lucas had the Mosler specially outfitted with spoiler delete, custom black paint scheme, and possibly a space for an R2 unit behind the engine. 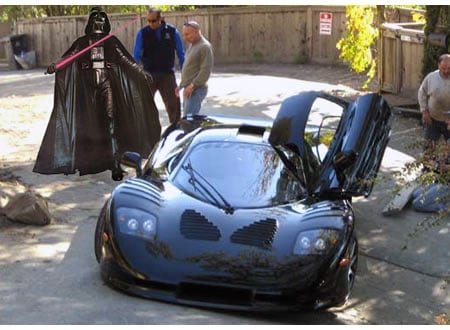 The Mosler MT 900 packs a 435 HP LS6 amidships that propels the car to 60 mph in a mere 3.1 seconds. This MT 900 is serial number 003, with the first two serving as in-house Mosler test vehicles. Very nice indeed!
Source