Accompanying the new Porsche 911 Carrera GTS models at the upcoming 2014 Los Angeles Motor Show would be a new special edition based on the Panamera. Porsche revealed the special edition Panamera earlier today. Called the Exclusive Series, and as its name suggests has been developed by the Porsche Exclusive personalization department. It is based on the range-topping Panamera Turbo S Executive variant. The Executive Panamera is slightly longer than the standard models and comes with a pair of bucket seats. This is the most expensive variant of the 2015 Porsche Panamera and only 100 units of the Panamera Exclusive Series will be produced for global distribution. 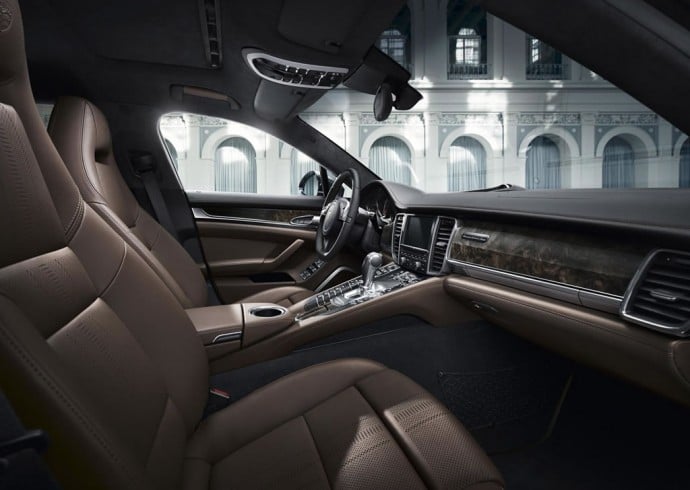 The Panamera Exclusive Series features a two-tone exterior paint treatment that combines Jet Black Metallic with Chestnut Brown Metallic that is applied by hand. The grille and rear diffuser and also painted solid black and is matched on the 20-inch wheels which feature a Sport Classic pattern. On the inside, the cabin is swathed in leather. All of the seats and the lower door panels are covered in Poltrona Frau Leather that has been dyed chestnut brown. Porsche’s new Rear Seat Entertainment System Plus makes its world debut in the Panamera Exclusive Series and is a standard feature on this model. No changes have been made to the powertrain; the twin-turbocharged 4.8-liter V-8 churns out 570 horsepower and 553 pound-feet of torque. The prices start at $264,895, including a $995 destination charge.

Tags from the story
Limited-Edition, Porsche