If you think the bespoke Aston Martin DB10 created especially for the upcoming James Bond flick looks good, wait until you see the 7.0-liter, V12 limited edition Vulcan. Yes, the track-only beast has finally been unveiled ahead of the Geneva debut and it is jaw dropping. Like the Roman god it borrows its name from, it’s safe to say that the limited edition supercar is the craziest and most extreme creation by Aston Martin since the One-77. Only 24 examples will be produced, making this edition truly limited. The beast arrives with a 7.0-liter V12 heart under the hood producing upwards of 800 bhp, and a price tag of £1.5 million ($2.33 million). Aston Martin’s CEO Dr Andy Palmer described it as “a sports car for true sports car lovers,” and promising that the Vulcan “sets a whole new standard in the ultra-high luxury supercar class.” 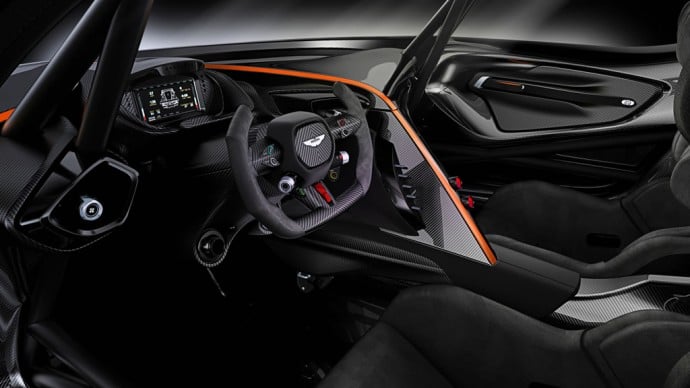 The engine was developed in conjunction with Aston Martin Racing, drawing on the company’s GT motorsport experience. Underpinning the carbon fiber body is a lightweight carbon fiber monocoque assembled by company motorsports partner Multimatic. Drive is channeled rearward to 19-inch wheels and Michelin tires through a six-speed sequential transmission. Additionally, the Vulcan features a limited-slip differential and a magnesium torque tube with a carbon fiber prop shaft. Brembo calipers and carbon ceramic racing brake discs provide the braking power. This is an FIA-approved treatment for the track only sportscar, so it gets track-derived pushrod suspension with Multimatic’s Dynamic Suspension Spool Valve dampers, antiroll bars front and rear and variable traction control. All 24 buyers of Aston Martin Vulcan will be offered a chance to train with Aston Martin’s professional drivers through a handful of events using the One-77, V12 Vantage and GT4 race car, gradually building to the Vulcan. On top of that, they can book time in Turner’s Base Performance Simulators for virtual driving time.