If you’re someone like me who is deeply passionate about high-performance automobiles and fighter jets, this particular news will make you jump in excitement. McLaren Automotive recently announced that it has entered into a partnership with Lockheed Martin Skunk Works to elevate the future of supercars. In case you haven’t heard of Lockheed Martin’s Skunk Works division, they are the same bunch of aviation experts who created the Darkstar – the fictional yet jaw-dropping hypersonic jet featured in the opening scenes of Top Gun: Maverick – the highest-grossing movie of 2022. In fact, the movie prop was so realistic that the Chinese authorities reportedly realigned one of their spy satellites to snoop on it. But the relatively autonomous Skunk Works team is better known for secretive aerospace projects like the iconic SR-71 Blackbird and U2. What that means is this unique collaboration between McLaren and Lockheed Martin is not a mere publicity stunt and might end up accomplishing something truly fascinating. 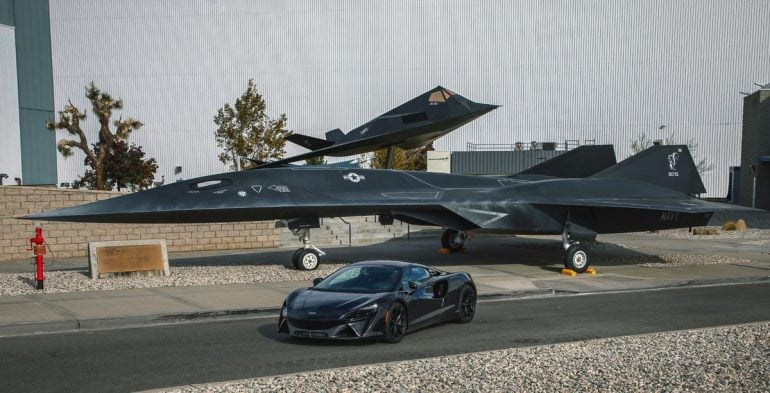 The official press release from McLaren doesn’t offer details on the collaboration except for claiming that it will test futuristic fighter jet technology and its integration into the manufacturer’s supercar design. McLaren further claimed that the research will utilize a new state-of-the-art Skunk Works software in the development of high-performance, cutting-edge automotive supercar design. The project will help McLaren to “[set] the parameters for high-speed systems more accurately and swiftly than traditional design methods.” The British manufacturer even brought its Artura hybrid supercar to the Skunk Works headquarters for a photo op with the fictional Darkstar hypersonic jet. 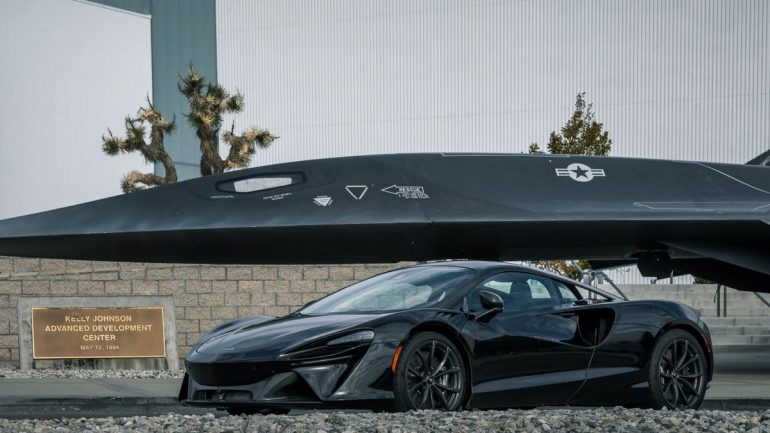 McLaren Automotive’s Chief Technical Officer, Darren Goddard, said, “McLaren is a pioneering company that has always pushed boundaries and sought out new innovative and disruptive solutions to making the ultimate supercars. Working alongside an iconic company such as Lockheed Martin Skunk Works, renowned for their visionary focus on the future, is a natural fit. We hope this is the start of a longer and deeper collaboration that will benefit our customers in the long-term.”


While it’s difficult to gauge the actual objective of the collaborative project from the press release, we can only presume that McLaren might be trying to benefit from Lockheed Martin’s advanced aerodynamic design development techniques and use them in the realm of automotive design. With the car industry swiftly transitioning towards electrification, the importance of aerodynamics has become even more relevant. Manufacturers are searching constantly searching for new ideas to come up with more aerodynamically efficient car designs. It’s a critical step in the pursuit to extract maximum range out of electric vehicles. Let’s see what comes out of this collaboration between two industry leaders; it can only be exciting for engineering nerds like me.
Tags from the story
McLaren, Supercar