After the fastest bikes, cars, submarines, you may possibly want to spend a part of your riches to own the Maltese Falcon- fastest personal sailboat in the world. The Maltese Falcon has written a new page in the history of yachting. The Maltese Falcon, a $100 million yacht that the designers claim is the largest and fastest personal sailboat in the world, formally set sail in Italy on July 14. The 87.5-meter yacht has three masts each one 57 meters high and weighing 26 tons which rotate depending on the wind direction. To maximize speed, the sails are trimmed to the wind by rotating the mast – thus making the boat much more aerodynamically efficient. 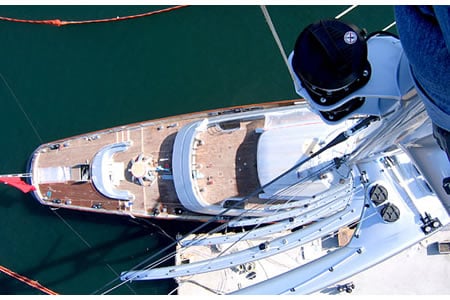 The Maltese Falcon was built by Italian superyacht specialist Perini Navi, a company which has a reputation for its insight and understanding of electrical systems. According to an article in the Mercury News, Perkins reportedly sold his beloved Bugatti to help fund the yacht. It also represents the successful completion of a multi-million-pound engineering and design project by Insensys, a company leading the world with its innovative expertise in fibre optics sensing and composite technology.
Source