In the world of automobiles, more power is never enough. The recently unveiled Mercedes Benz S63 AMG Coupe is in no way lacking in the power department as the 5.5 liter bi-turbo V8 under the hood churns out 585 hp and 664 pound-feet of torque. But for the power junkies who wanted a bigger lump in the engine bay, Mercedes has finally introduced the S65 AMG Coupe which now sits at the top of the S-Class range. Unveiled on Monday, the flagship model replaces the CL65 as Mercedes moves to consolidate it under the S-Class range. Developed for the clientele who wanted the brute power of the S65 AMG saloon but from the beautiful 2-door body of the S-Coupe, the Mercedes S65 AMG Coupe without a doubt is the ultimate S-Class. 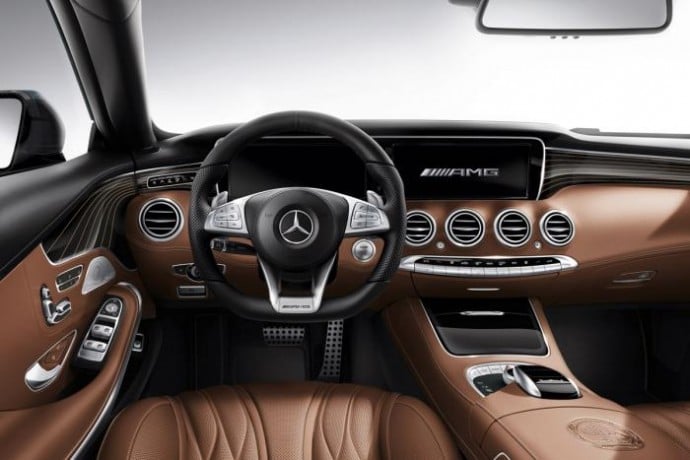 Just like the saloon, the Mercedes S65 AMG features the same 6.0 liter bi-turbocharged V12 which is also shared by the G65 AMG Wagon. The engine produces 621 horsepower and 738 pound-feet of torque which is channeled to the rear wheels through a seven-speed AMG Speedshift gearbox. This is enough for 0-60 mph acceleration in an estimated 4.0 seconds, and achieving an electronically-limied 186 mph top speed. The additional chrome detailing helps the 65 AMG model stand out from the S63 AMG Coupe out of which most noticeable change can be found up front where the chrome grille replaces the black mesh finish for the grille and air intakes. Mercedes has also fitted an AMG-spec version of the Magic Body Control system, which includes Active Body Control, Road Surface Scan and a function that actually allows the car to lean into bends. On the inside, the cabin looks first rate thanks to AMG leather with a diamond pattern, AMG sports seats developed for long-distance comfort, leather in the roof, in the dashboard and door panels, and a new three-spoke steering wheel. Order books for the new 2015 Mercedes-Benz S65 AMG Coupe open in the coming weeks and the first cars should be delivered by the end of the year with the prices expected to start at $220,000.