Mercedes has kicked off 2022 by revealing one of its most ambitious projects. Meet the Vision EQXX, a battery-electric four-door sedan with a polarizing design and world-beating specifications and technology. Everything about the Mercedes Vision EQXX is so far out and extreme that it makes all other EVs in the market look mundane. Here’s everything you need to know about the revolutionary concept car that was virtually unveiled yesterday at the Consumer Electronics Show in Las Vegas. 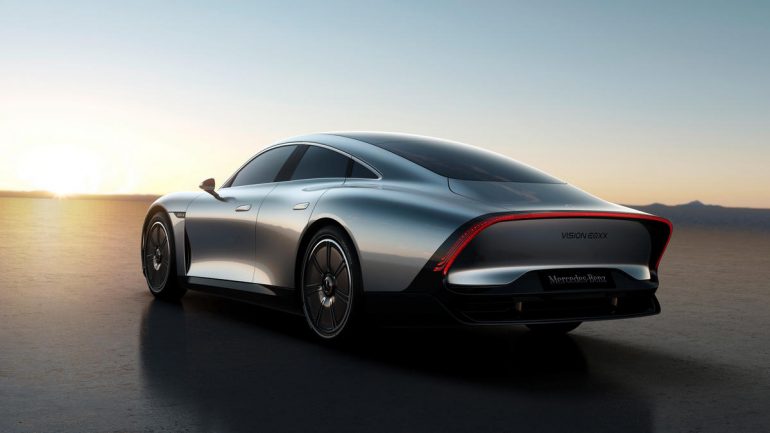 The design is unlike anything else we’ve seen from Mercedes
The first thing you’ll notice about the Mercedes Vision EQXX is its odd design, which strangely doesn’t follow the design DNA of the German automaker’s EQ-branded electric cars. It looks more like a spaceship than an electric sedan. From the front, the EQXX looks like a futuristic GT with a sleek and sporty design thanks to the aero elements and the full-length light bar that sits flush with the bodywork. The headlights also have lighting elements that are made to look like Mercedes’ three-pointed star logo. The silhouette of the car reveals its longtail body shape that might remind you of the Mercedes-Benz IAA Concept revealed at the 2015 Frankfurt Motor Show. The entire periphery of the tail is illuminated with a continuous LED bar that acts as the taillight and puts emphasis on the longtail design. Another interesting element of the rear is the retractable rear diffuser which is deployed only when needed. 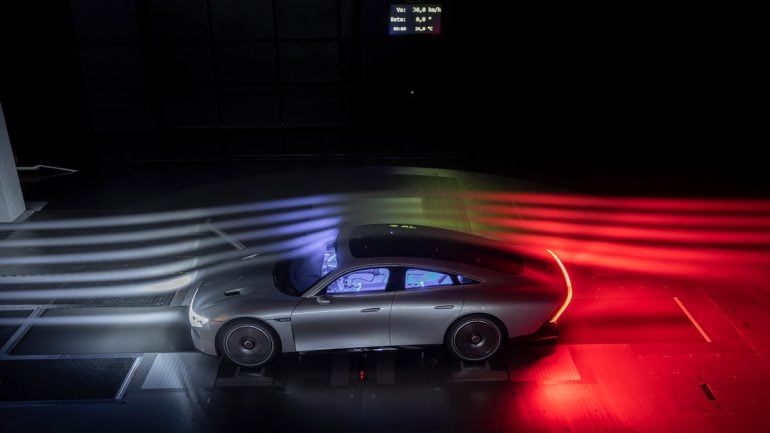 The Vision EQXX is the most aerodynamic car ever designed
The odd design of the concept car has been created for a purpose – to make the Vision EQXX as aerodynamically efficient as possible. According to Mercedes, the concept EV has a super-impressive drag coefficient of just 0.17. Just to put that into context, the automaker’s flagship EV, the EQS, has a drag coefficient of 0.20 which makes it the most aerodynamic production car. In fact, the EQXX also beats the purpose-built Volkswagen XL1 concept which was introduced as the most efficient car in the world with a drag coefficient of 0.19. Everything from the longtail to its teardrop shape to its unique wheels helps in achieving unbelievable aerodynamic efficiency. This helps in dramatically increasing the range 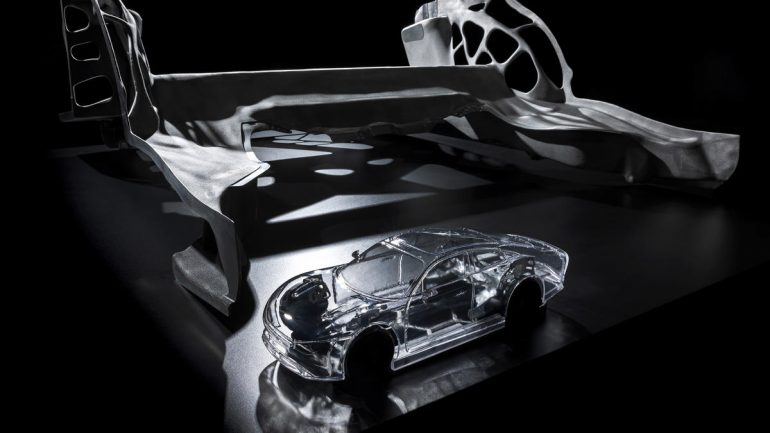 An EV that chould solve the problem of range anxiety
Most electric vehicles on currently on sale have a driving range between 200-300 miles, which along with limited charging infrastructure results in range anxiety. While the Mercedes EQS promises a range of 485 miles, which is very impressive, the Vision EQXX beats everyone with a claimed range of 648 miles on a single charge, which converts to 1000 kilometers. If that doesn’t blow your mind, I don’t know what will! You might argue that the EQXX is just a concept car, Mercedes plans on building a functional version of the EV to prove its 1000km range by completing a road trip across Europe sometime in spring this year. The EQXX also has solar panels on the roof that can add up to 15 miles of range on long-distance trips. 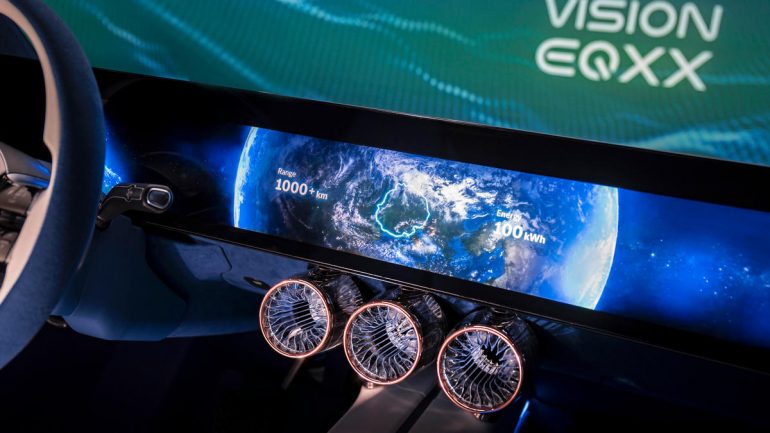 EQXX gets a 1000km range from a battery pack smaller than the one on the Mercedes EQS and Tesla Model S
The crazy range of the Vision EQXX might trick you into believing that the EV packs a massive battery. However, that’s not the case. In fact, the idea of creating the concept was to test the limits of efficiency. The revolutionary battery pack of the EQXX has a capacity of slightly less than 100kWh, which is less than what the battery in the EQS can store. Mercedes says the EQXX will consume energy at a rate of 10kWh per 100 kilometers in real-world conditions, which comes to more than 6 miles per kWh. When translated into fossil-fuel consumption terms, that’s 1 liter of gasoline per 100 kilometers, which is jaw-dropping. But that’s not all, the battery pack is 50 percent smaller in volume and 30 percent less in mass than the one in the Mercedes-Benz EQS sedan. The German automaker also said that the EQXX features a 900-volt architecture, which equates to even faster charging. The actual figures have not been revealed, though. 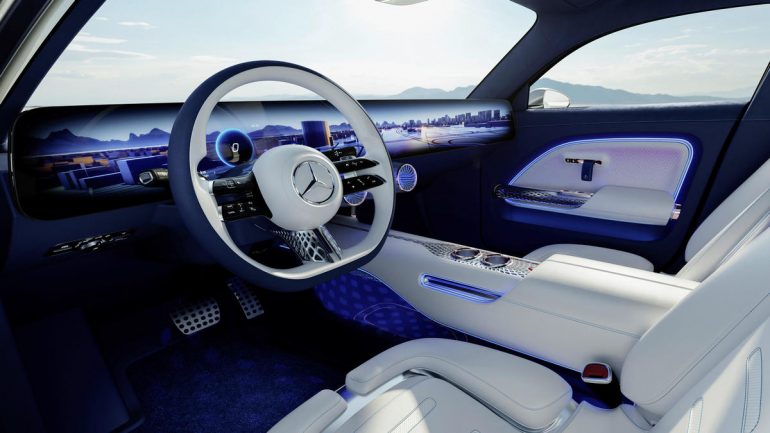 The interior is just as wild as the rest of the car
The Vision EQXX being a concept car, one would expect its interior to be flashy and outlandish. But unlike other concepts we generally get to see at car shows, the EQXX’s cabin is not something that’s impractical and never makes it to production. The cabin design looks like a futuristic version of the one you’ll find in the EQS. 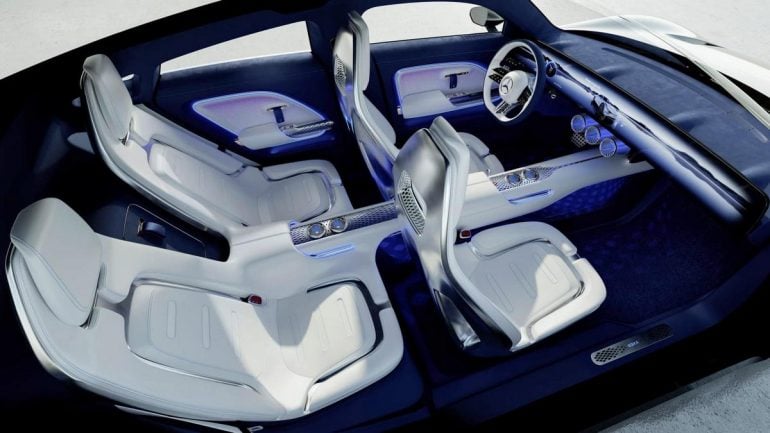 The interior is free of any kind of animal products and is entirely made of sustainable materials. Instead of leather, the EV uses upholstery materials made out of mushrooms and cactus fibers. The carpets are made from pure bamboo fiber, while the floor and door trim pieces rely on recycled PET bottles. The highlight of the cabin is a massive 47.5-inch screen that forms the dashboard and stretches the full width of the vehicle. The one-piece display features 8K resolution and cutting-edge graphics, which should come in handy for its 3D Navigation system. 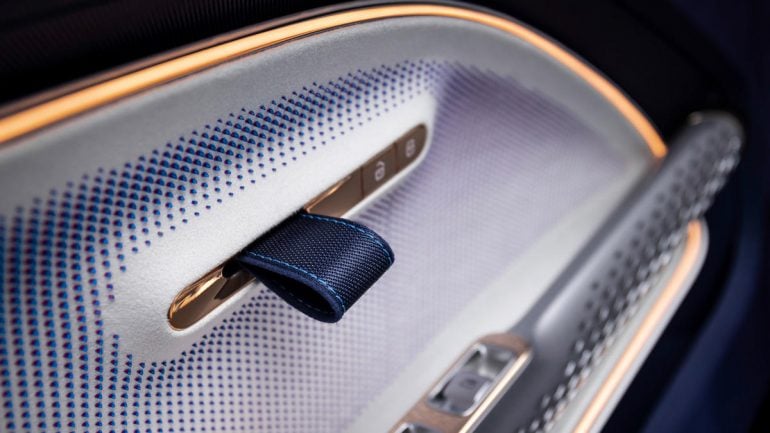