Mercedes has just unveiled its fifth compact car, the all-new CLA Shooting Brake. The newest entrant to the Mercedes range is essentially a wagon version of the CLA-Class sedan and expectedly looks like a compact version of the CLS Shooting Brake. The new model was revealed yesterday in both standard and the high performance CLA45 AMG, but neither will be launched in the United States. Based on the same platform that underpins the CLA four-door coupe, the A-Class hatchback, B-Class minivan and GLA crossover, the CLA Shooting Brake features a revised roofline that has more headroom in the back seat and significantly more cargo capacity than the four-door’s trunk. 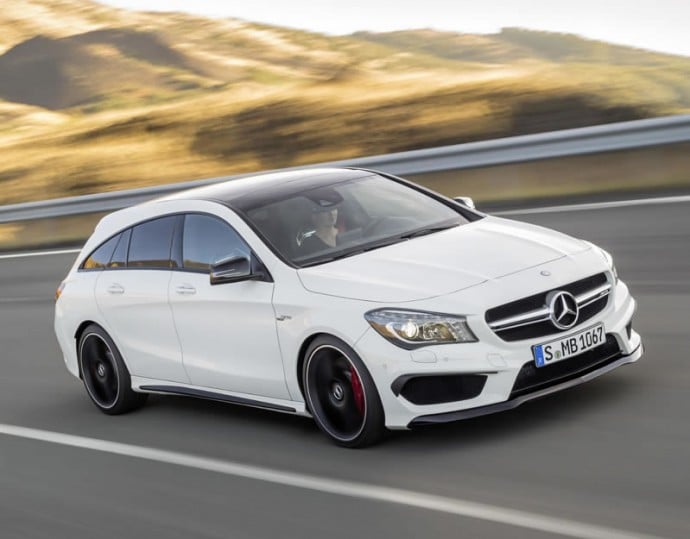 Mercedes will offer the CLA with a variety of engine choices, including a 2.1-liter turbodiesel with either 136 or 177 horsepower, a 1.6-liter four with 122, 156 or 211 horsepower. That last variant will also be available with 4Matic all-wheel drive. The range topping CLA45 AMG Shooting Brake carries the same 2.0-liter turbo four as the four-door CLA45 as well as the A45 and GLA45 and has 360 horsepower at its disposal. Mercedes claims that it can go from 0 to 62mph in 4.7 seconds and has a top speed of 155mph. Deliveries of the Mercedes-Benz CLA & CLA 45 AMG Shooting Brake will commence March next year.