“It’s like the hand of God pushing you in the back,” Jay Leno said about MTT Turbine Superbike. American TV presenter Jay Leno (NBC), famous for his great collection of supercars and bikes, is the proud owner of the first production MTT Turbine Superbike. He called it: “smooth”, “amazing” and “wicked fast”. As the leaders in turbine innovation, MTT has created the ultimate in high-performance machines: the MTT Turbine Superbike. The Superbike is the world’s first turbine-powered street legal motorcycle in its class, and has been recognized by Guinness World Records as the “Most Powerful Motorcycle Ever to Enter Series Production” and the “Most Expensive Production Motorcycle”. Power-driven by a Rolls Royce Allison gas turbine engine, the Superbike has demonstrated over 300 hp and 425 ft/lbs of torque on the Dyno Jet 200, and has been clocked at a record-breaking 227 mph. 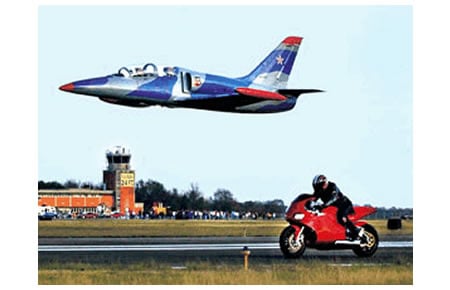 Unlike some earlier jet-powered motorcycles, where a massive jet engine provided thrust to push the motorcycle, the turboshaft engine on this model drives the rear wheel via a two-speed gearbox. Riding the motorcycle is said to be somewhat tricky due to the inherent throttle lag in the engine. Representing the latest in engineering expertise, the bike also features carbon fiber fairings, a rear-mounted camera with LCD color display, forward- and rear-looking radar detector with laser scrambler, one-touch “Smart Start” ignition, and more. The MTT Turbine Superbike is starring in the Warner Brothers movie “TORQUE”, and Men’s Journal lists the bike as one the most “awe-inspiring, innovative, and otherwise amazing designs” in their feature article “Perfect Stuff”. With production limited to five per year in customized colors and costing $150,000, the SUPERBIKE has become a revolution.