Swedish supercar maker Koenigsegg has been on a roll lately. Only recently it humiliated Bugatti by smashing the 0-249mph-0 record which was shortly held by Chiron; and that too by using a customer’s Agera RS supercar. A month later, the Koenigsegg Agera RS driven by factory test driver Niklas Lilja has smashed the record for the fastest production car in the world by achieving an average speed of 277.9 mph during two runs on a closed 11-mile stretch of Nevada’s Route 160 between Las Vegas and Pahrump. The factory-spec Agera RS powered by a 5.0-litre twin-turbo V8 churning out 1,360bhp and 1,011lb ft of torque clocked a jaw dropping speed of 284.55mph in one direction, and then 271.19mph while fighting an uphill gradient and strong headwind in the other. Doing so, the Koenigsegg Agera RS has snatched the crown from Bugatti Veyron Super Sport which previously held the record for being the fastest street-legal production car. 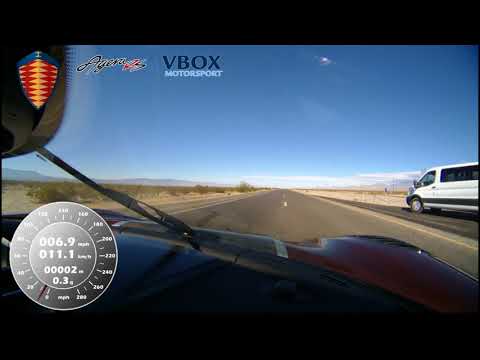 But that’s not all; Koenigsegg has officially confirmed that the Agera RS was able to set five world records during the same attempt. The supercar managed to shave almost four seconds from its previous record for the fastest 0-249mph-0. It also set a new record for the highest average speed for a flying mile on a public road along with registering the highest speed achieved on a public road. You can watch the Agera RS’s record setting run and get a feel of what it looks like reaching 290mph on a public road from inside the cockpit.

Tags from the story
Koenigsegg, Worlds-Fastest