Yet another rare Italian exotic supercar has met its end in a car crash and that too just a few minutes after being driven off from the showroom. A brand new Lamborghini was totaled in a road accident on the M1 motorway near Wakefield, West Yorkshire, The UK. According to the Yorkshire Evening Post, the supercar ran into some mechanical problems which slowed down the car and eventually bringing it to an involuntary stop in the middle of the motorway, making it a sitting duck for the oncoming traffic. An innocent motorist driving a van couldn’t avert the inevitable and crashed into the back of the Lamborghini destroying the right side of the rear and the engine bay. The van driver was left with head injuries which are not believed to be serious. “It’s only a car! But on this occasion, a 20-minute old brand new Lamborghini that stopped due mechanical failure in lane 3 them hit from behind by an innocent motorist,” PC Richard Whiteley from West Yorkshire Police tweeted. 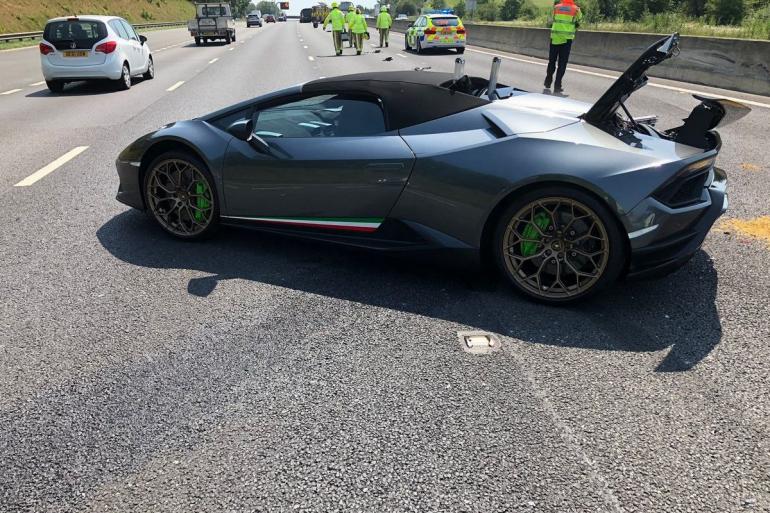 From the pictures tweeted by the police and the ones that have surfaced online, the supercar in the collision appears to be a Lamborghini Huracán Performante Spyder – the convertible version of the track-focused supercar that once held the record for the fastest lap time around Nürburgring. It had a starting price of $314,654 when it was launched in the US back in 2018. It’s a shame that there’s now one less of this truly amazing automotive piece of automotive art left in the world.

Tags from the story
Crash, Lamborghini