Porsche has revealed a new advanced HD matrix LED headlight technology that it plans to introduce by 2023. The German automaker claims that it will set new standards in ‘glare-free’ high beam lighting performance. According to a report by Autocar, the new system is significantly different than what’s being used by current Porsche models which uses a single high beam matrix unit that sits in the middle of the headlight. In the new design, the matrix function for the low and high beams are carried out by two separate light sources in each assembly. Furthermore, the current Porsche LED headlights make do with 84 pixels in each headlamp unit. By comparison, the latest system is imbued with 16,384 LEDs or pixels in each of the four modules, which offers a combined 65,536 pixels for the high beam matrix function. It operates at an intensity of up to 160lx, which totals 300lx per headlight in combination with the additional high beam. 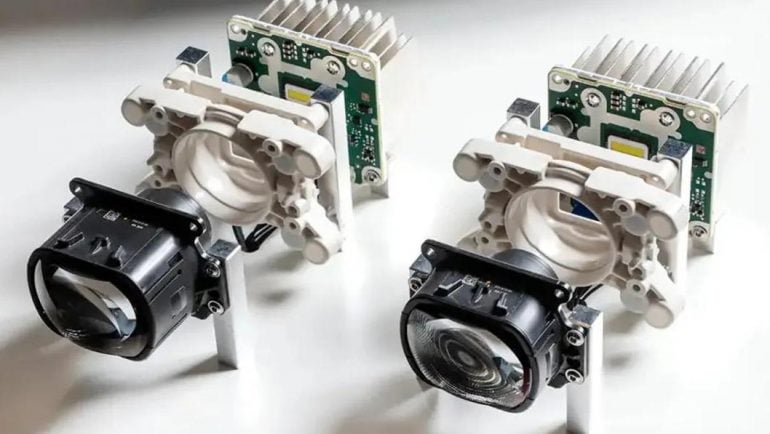 “At 300lx, it is possible to project the high beam up to 600m. But it is not only about a certain range. You need good light distribution within the whole field, too. We achieved this with four light sources. The brightness of the center and side areas can be continuously adjusted for added roadside illumination. Greater illumination leads to better lighting performance,” said Benjamin Hummel, Manager Light Modules and Regulation head of lighting modules at Porsche. The new HD LED technology was developed in partnership with Hella/Forvia along with LED and laser diode company Nichia and semiconductor company Infineon. It includes the new micro-LEDs that are as thin as human hair and the high-definition control unit that manages the output of each micro-LED. The new headlights that were spawned as an evolution of Porsche’s signature four-point headlight design will debut as an option for the facelifted 2023 Porsche Cayenne.