Rolls-Royce has finally lifted the veil off its brand new model, a four-seater convertible named the ‘Dawn’. Back in the month of May, Rolls-Royce had announced that its upcoming model would revive the special name from the marquee’s history, which was first used on the Silver Dawn of 1949. The Silver Dawn was the first Rolls-Royce to be offered with a factory-built body and just 28 of them were dropheads, built between 1950 and 1954. Slated for a formal debut at next week’s Frankfurt Auto Show, Rolls-Royce previewed the new drophead model today at its home in Goodwood, England. The British luxury automaker released a massive 4300-word press release for the Dawn describing it as the “sexiest” car Rolls-Royce ever built; and we must admit, it is one astonishingly beautiful looking car.


Although the Rolls-Royce Dawn shares the same underpinnings of the Wraith coupe, but the marquee does not want us to see it as a convertible version of the Wraith. Nearly 80 percent of the Dawn’s body panels are new. The doors have been carried over, but the front is pulled forward by 2.1 inches compared to the Wraith and the grille is recessed by 1.7 inches. The overall dimensions are also beefier giving it a sportier stance than the Wraith. The rear track is slightly wider than that of the Ghost, while the wheelbase is 180mm shorter. But despite this shorter length, the Dawn is a proper four seater with ample space for the rear passengers. This was achieved by shrinking the trunk space from 16.6 to 10.4 cubic feet and extending the length of the car by half an inch.

The Rolls-Royce Dawn comes with a fabric roof instead of a hard retractable top, but the company claims that six-layer canvas top soaks up all the noise making it as silent as the fixed-roof Wraith. The automaker believes this will be the quietest cloth-roof car on sale. And on the decision of choosing fabric top over a hard retractable roof, Rolls says, “the only choice for a Rolls-Royce was a fabric roof for reasons of aesthetics, romance and brand appropriateness. There is nothing more romantic than driving a convertible in the rain at night and hearing the drops pattering on the roof.” 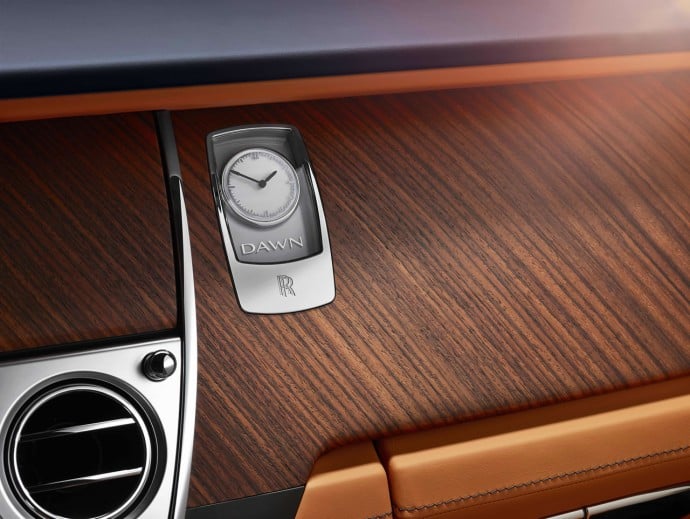 Under the hood, the Dawn features a Rolls-Royce trademark 6.6-liter V-12 good for 563 horsepower, which is enough to propel the 5,644-pound beast from 0 to 62mph in just 4.9 seconds. It comes with the same the ZF eight-speed automatic transmission found in its siblings. On the inside, the cabin looks familiar with the dash featuring similar styling as that of the Wraith and the Ghost. Special touches include individually applied polished metal chaplets around the instrument. In addition, a new clock design featuring the Dawn name has been added. Pricing is yet to be announced but the starting figure should be around $325,000. And according to reports, the Dawn’s first model year is already sold out.
Tags from the story
Rolls-Royce