Behold the ‘Venus,’ the multitrillion-dollar yacht of Steve Jobs, which we were all so eager to see more of. Amsterdam-based investor Michiel Frackers was able to get a close glimpse of this beauty parked in an isolated Amsterdam harbor area. The Yacht was earlier impounded in the Amsterdam harbor following a dispute between Jobs estate and Philippe Starck’s company which designed it.

“On the day after Christmas, my girlfriend and I went to take a look. We walked through the fields to get to the former container terminal where Venus was docked. There were a few people on board cleaning the upper deck, but there was nobody else around. We took some pictures and shot this video with an iPhone 5. It’s a unique design that looks much better up close than in pictures or even in a video.” 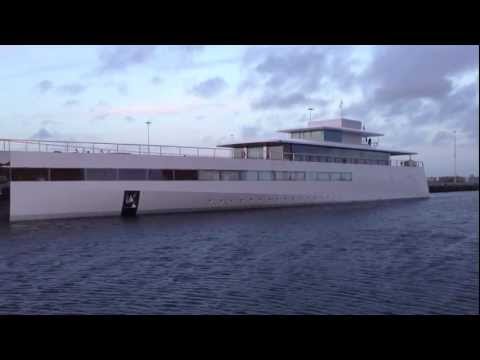