In terms of technology, supersonic is the future. Since the Wright brothers’ first flight, the quest for aviation has been higher, further, faster. With the retirement of the Concorde in 2003, it might seem like a strange time for a dramatic reintroduction to supersonic travel. Imagine jetting from New York to Miami in an hour and a half, or darting from New York to Tokyo in less than 10 hours – including a stop to refuel. That’s the $1.4 billion dream of aerospace pioneer Bill Tracy, whose startup Aerion is hoping to build the first supersonic business jet or SBJ. Billionaire investor Robert Bass backs Reno-based Aerion Corporation. The company is placing its bets on its natural laminar flow technology developed and patented by Dr Richard Tracy. This supersonic project claims the capacity for eight to 12 passengers, a range of 4,000 nautical miles, sales prices of $80 million and entry into service by 2012. It’s a matter of balancing the technology available today with the economics to ensure that there’s an economic case to make the investment to go forward. 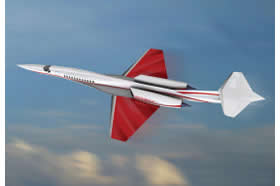 One of the biggest differences in Aerion’s approach is that their product is designed to fly subsonically over land, which doesn’t violate the Federal Aviation Administration’s current sonic boom regulations. Aerion’s 90,000-pound design utilizes a thin, unswept leading-edge wing and T-tail to achieve natural laminar flow at a Mach 1.5 maximum range cruise. With its Pinocchio-esque nose and slender fuselage, a model of the SBJ in Tracy’s office bears some resemblance to the iconic Concorde. Tracy, who is now 75, has spent almost two decades refining the SBJ, and models of his designs have proven themselves in wind tunnels and computer simulations. But the aircraft is still several years from rolling down the runway – if, in truth, it ever does.
Source