Using the components from the Volkswagen Beetle, the 356 became the first car ever to wear the Porsche badge. Founded by Austrian engineer Ferdinand Porsche in 1931, the German carmaker has gone on to become one of the biggest names in the high-performance car industry. The company represents the finest of German automobile engineering that thrill the driving senses through their creations. Porsche has made some of the world’s greatest sports cars for almost seven decades now, but there are few which stand out from the rest. We have compiled a list of what we think are the best Porsches of all time. Some of these cars are the most sought after names in the collector’s cars circuit and sell for several million dollars at the auctions.


7. Porsche 911 GT3 R Hybrid
Launched: 2010
Claim to fame: We begin the list with Porsche’s first race ready hybrid, the 911 GT3 R Hybrid. Based on the ultra-hardcore 480-horsepower GT3 racecar, Porsche added two 60kW electric motors to the front wheels to provide extra bursts of power. The hybrid technology featured in the car was developed by the Williams F1 Team and is based on their F1 kinetic energy recovery system (KERS). But unlike most of the hybrid cars, in the 911 GT3 R Hybrid car the energy is stored at the flywheel rather than batteries. The extra boost of power helps to pass cars, cut lap times, and perhaps more importantly in an endurance race, save fuel, which is very crucial in endurance racing. This car marks the beginning of a brand new chapter for Porsche and we might even see the technology trickle down to road cars in the years to come.

6. Porsche 911 (993)
Launched: 1994
Claim to fame: The final incarnation of the air-cooled 911 first introduced in 1964, the 993-generation of the iconic 911 is considered by hardcore Porsche purists as the last truly great model in its long lineage. Most enthusiasts and car collectors consider the 993 to be the best of the 911 series as everything about it was perfectly done by the German marquee. The third all-new 911 in the history of the Zuffenhausen sports car maker, the revised styling of 993 along with a lot of new technology brought an air of modernism at the German carmaker. The 993 family featured three body styles and at least six official engine variants. The wide body variants command a hefty premium in today’s market, while the 1997 and 1998 C2S version has proven to be the most desirable amongst car collectors.

5. Porsche 911 Carrera RS
Launched: 1973
Claim to fame: The Carrera RS models are sometimes considered by the Porsche enthusiasts to be the most “classic” 911s of all time. According to a report in the UK’s Telegraph, the Porsche Carrera RS saw a staggering 669 percent increase in value in the last decade alone, which makes it the best classic car investment you can make right now. Recently, one of 200 ‘Lightweight’ variants was famously sold for $1.42m at an auction. Originally, the RS was built to meet motorsport homologation requirements. Compared to a standard 911S, the Carrera RS models came with more powerful engines, a wider back end and a tougher suspension making them much faster and more predictable at high speeds. Thanks to its rising demand amongst car collectors, the Porsche 911 Carrera RS has earned itself the title of ‘ultimate classic car’.

4. Porsche 917
Launched: 1969
Claim to fame: It is believed by many that the Porsche 917 is one of the most iconic racecars of all time. Based on the Porsche 908 racing car, the Porsche 917 was originally built to comply with the change in CSI rules about entering a car in the World Sportscar Championship. It went on to become the first racecar that gave Porsche its first overall wins at the 24 Hours of Le Mans in 1970 and 1971. However, Steve McQueen immortalized it in history of car racing in his 1971 film Le Mans, which turned the Porsche 917 into a superstar. Porsche built eleven variants of the 917 and they were powered by the Type 912 flat-12 engine of 4.5, 4.9, or 5-liter capacities. The 917/30 Can Am variant was capable of a 0-62 mph time of 2.3 seconds, 0–124 mph in 5.3 seconds, and a top speed of up to 240 mph. But it was the Porsche 917K under the Gulf Racing livery, with modified aerodynamics that stabilized the car, which won a slew of races in 1970 and became one of the most famous racing cars in the history of endurance racing. It conquered all the major races of that year including the 24 Hours of Le Mans, Daytona, Monza, Spa, Watkins Glen, Brands Hatch and the Austria Ring.

3. Porsche 959
Launched: 1986
Claim to fame: The Porsche 959 is the company’s first supercar produced between 1986 and 1989. Developed first as a Group B rally car, it was later turned into a production car for FIA homologation requirements and a little more than 300 were built. When it was introduced, the twin-turbocharged 959 became world’s fastest street-legal production car, boasting a top speed of 195 miles per hour. The sport model was capable of reaching 197 miles per hour, which was an unbelievable feet in that era. During its production run, the 959 was hailed as the most technologically advanced road-going sports car ever built. With an all-wheel drive system, a 450-horsepower twin-turbocharged flat-6, magnesium wheels and run-flat tires, it became the blueprint for every supercar that came after it. Despite its then-astronomical $225,000 price tag, all the 200 cars were snapped up immediately as the buyers got a chance to own a street-legal car like no other. Recently, one of these rare beauties was auctioned for a staggering $1.5 million.

2. Porsche Carrera GT
Launched: 2004
Claim to fame: The Carrera GT is considered as the most extreme car Porsche has produced till date. The limited edition supercar, built between 2004 and 2007, was more exclusive than Ferraris and Lamborghinis of its time and came with a price tag of half a million dollars. Powered by a 5.7-liter, 605-horsepower V10 engine originally designed for Le Mans duties, the Carrera GT made its debut in the concept form at the 2000 Paris Motor Show. Mated to a standard six-speed manual transmission, the insanely powerful engine helped propel the supercar to 60 mph in less than four seconds and 125 mph is approached in less than 10 seconds. The lack of chassis electronics and driver aids such as traction control and ABS made the Carrera GT one of the most dangerous road legal cars. The Carrera GT developed a reputation as a car for skilled drivers only. In 2013, actor Paul Walker lost his life along with his friend in an accident in this car. The Carrera GT went out of production in 2007 and the rare supercar is hugely desirable amongst car collectors. 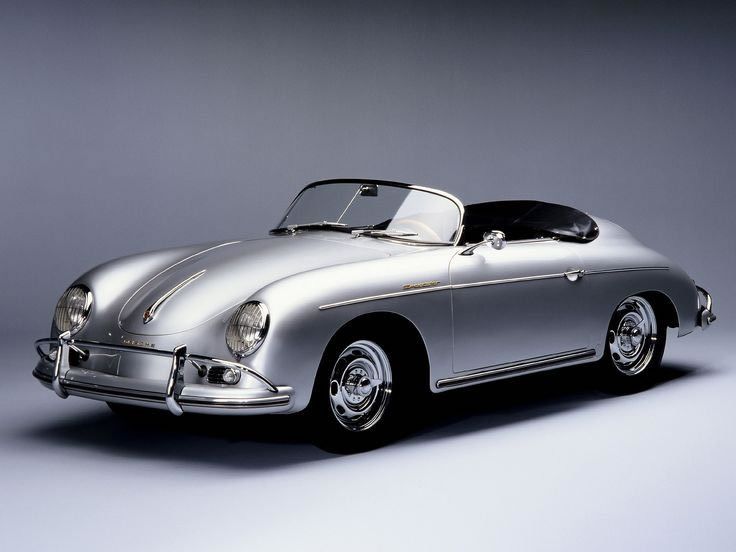 1. Porsche 356
Launched: 1948
Claim to fame: The Porsche that tops the list is in fact the iconic German carmaker’s first production vehicle. Introduced as a luxury sports car in 1948, the 356 was first produced in Austrian by Porsche Konstruktionen GesmbH for two years. For the next 16 years, the car was produced by German company Dr. Ing. h. c. F. Porsche GmbH. Created by Ferry Porsche, the Porsche 356 is based on the VW Beetle and shares the same layout with an air-cooled, rear-mounted four-cylinder engine driving the rear wheels. In addition to being the first Porsche-branded vehicle ever built, it also went on to become the first Porsche to win a motor sports competition and the first Porsche to be sold in the United States. Thanks to its beautiful design, feathery lightweight body, nimble handling and attention to performance, the 365 went on to become one of the most popular 2-door sports cars of its time. In its 18 years of production, Porsche created several different versions of the car available in both coupe and convertible configurations and the production volume grew from 50 cars in the first two years to more than 76,000 in total.
Tags from the story
Best-Of, Cars, Porsche, Top-10, Top-5