Take a look at the list of the largest yachts on the water, which gives owners the bragging rights of having one of the world’s largest boats. Superyachts are privately owned vessels with professional crews and are found in the greatest abundance in the Mediterranean, Caribbean, and the Middle East. The world’s superyachts are some of the biggest and most expensive toys of the super-rich, floating palaces with unique features that can carry price tags into the hundreds of millions.
Here we take a look at the top 10 yachts in the world in 2012.
10.Serene
The Serene is a 134-meter motor yacht, which was launched in 2011 by Fincantieri Yachts. The elegant vessel’s exterior design and engineering are the work of Espen Oeino. The yacht features interior styling by Reymond Langton Design. Work began on the yacht in 2007, and it is believed to be one of the most technically advanced superyachts ever constructed. The Espen Oeino designed exterior has seven decks and has a generous beam of 18.5 meters. She features two helicopter landing platforms, storage for a large submarine, and a huge internal seawater pool, adapted to be used for tender docking.

9.Rising Sun
Rising Sun is a 138,4m (454’1”ft) motor yacht, custom built-in 2004 by Lurssen Yachts. Sercombe Design has designed the yacht’s interior. She was last refitted in 2007. It has a steel hull and aluminum superstructure with a beam of 18.5m (60.70ft) and a 5m (16.40ft) draft. Rising Sun is capable of 28 knots flat out, with a cruising speed of 26 knots. The yacht offers accommodation for up to 16 guests. She is also capable of carrying up to 45 crew onboard to ensure a relaxed luxury yacht experience. 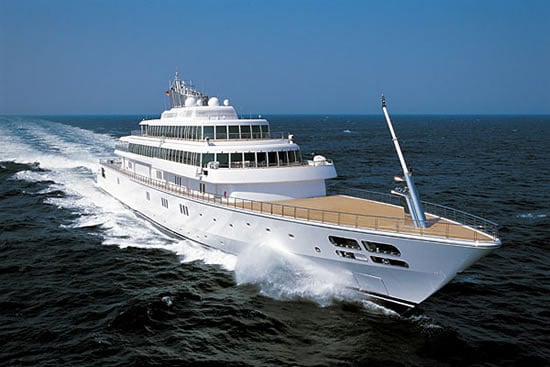 8.Al Salamah
Al Salamah is a 139.30m (457.02ft) motor yacht, custom-built in 1999. Terence Disdale is responsible for her beautiful exterior and interior design. She was last refitted in 2009. Al Salamah has a steel hull and aluminum superstructure with a beam of 23.50m (77.10ft) and a 4.8m (15.75ft) draft. The yacht is capable of 22 knots flat out, with a cruising speed of 17 knots from her 840,000-litre fuel tanks.
Al Salamah offers accommodation for up to 40 guests. She is also capable of carrying up to 96 crewmembers onboard to ensure a relaxed luxury yacht experience. 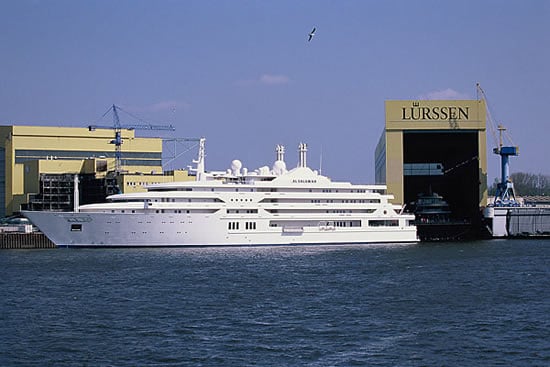 7.Yas
ADMShipyards successfully launched the 141m Swift141, christened ‘Yas,’ in November 2011, entering the record books as both the largest launch of 2011 and most significant superyacht in recent history. Yas’s distinctive narrow profile was built on the steel hull of a former Royal Dutch Navy Frigate built-in 1978. Her frigate hull and lightweight composite superstructure help the enormous vessel reach impressive speeds of up to 26 knots. Yas was styled inside and out by Pierrejean Design in Paris, with a strikingly graceful exterior of fluid curves and volumes and a spectacular structural covering of glass. She can comfortably accommodate up to 60 guests. Simultaneously, modern diesel power and variable-pitch propellers assure a top speed of 26 knots, cruising speed of 20 knots, transoceanic range, and “green” fuel economy. In anticipation of her unusual speed for a yacht of this size, the project was first appropriately named “Swift141.” 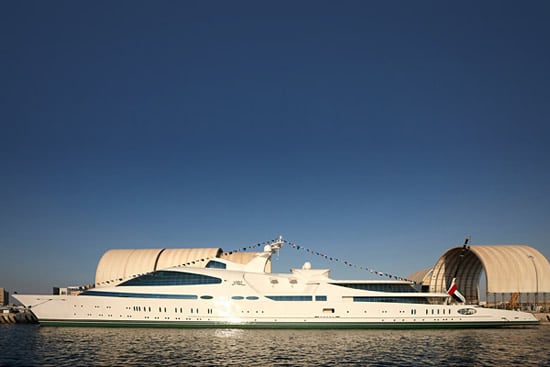 6.El Horriya
El Horriya (formerly Mahroussa) is a 145.72m (478’1″ ft) motor yacht, custom built-in 1865 by Samuda Bros. in London (United Kingdom). This luxury vessel’s sophisticated exterior design and engineering are the work of Sir Oliver Lang. Her exterior is styled by the Sir Oliver Lang team, who are also responsible for the entire engineering package. She was last refitted in 1987. This superyacht is capable of 16.00 knots flat out, with a cruising speed of 13.00 knots, and can carry up to 160 crew onboard to ensure a relaxed luxury yacht experience. 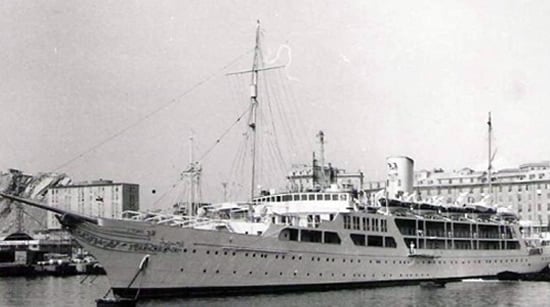 5.Topaz
At the start of her construction Topaz was forecast to be the fourth largest yacht in the world, measuring an unconfirmed 147m (482’3’’ft). Now, having only just left her floating shed at the Lurssen facilities in Bremen, Germany, she is ready to seize the title and undergo the final construction phases. Like all major superyacht new-builds, Topaz is shrouded in mystery. All we know about this ethereal sea giant is that her vast size is reported to be between 144m to 147m alongside her position as the second-largest yacht ever to be launched by the revered German shipyard after the 155m Al Said. 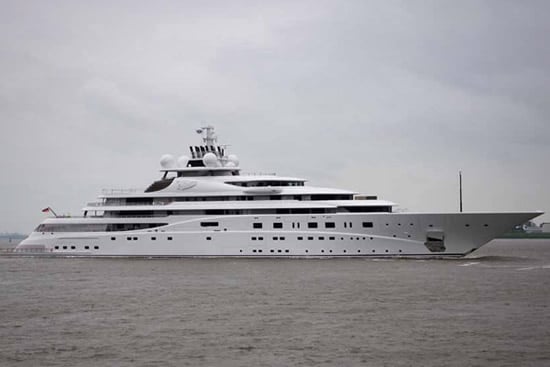 4.Prince Abdulaziz
Prince Abdulaziz is a 147m (482’3″ft) motor yacht, custom built-in 1984 by Helsingor Vaerft in Helsingor (Denmark). This luxury vessel’s sophisticated exterior design and engineering are the work of Maierform Maritime Technology. The yacht’s interior has been designed by David Hicks and has exterior styling by Maierform Maritime Technology. She was last refitted in 2005. Prince Abdulaziz has a steel hull and superstructure with a beam of 18.30m (60’0″ ft) and a 4.88m (16’0″ ft) draft. This custom yacht is equipped with an ultra-modern stabilization system, which reduces the roll motion effect and results in a smoother, more enjoyable cruising experience. It is capable of 22.00 knots flat out, with a cruising speed of 182.00 knots from her NaN-litre fuel tanks, and offers up to 64 guests. She is also capable of carrying up to 65 crew onboard to ensure a relaxed luxury yacht experience. 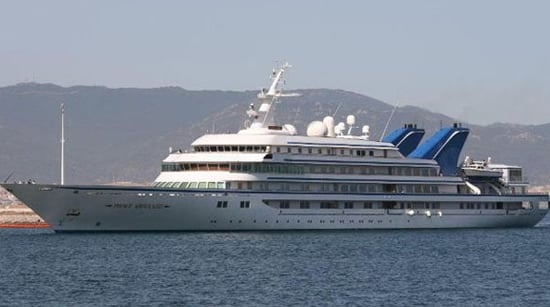 3.Al Said
Al Said is a 155m motor yacht that was custom built-in 2008 by Lurssen Yachts in Bremen. This magnificent yacht features exterior styling by Espen Oeino, with interior design by Redman Whitely Dixon. Al Said has a steel hull and aluminum superstructure with a beam of 24m (78.74ft) and a 5.20m (17.06ft) draft. The mega yacht is capable of 25 knots flat out, with a cruising speed of 22 knots. Al Said offers accommodation for up to 70 guests. She is also capable of carrying up to 154 crew onboard to ensure a relaxed luxury yacht experience. 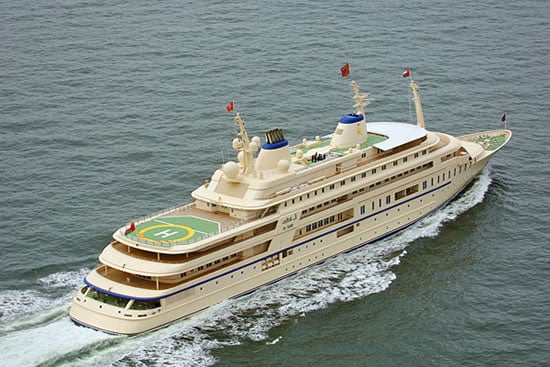 2.Dubai
Launched in 2006 by Platinum Yachts, Dubai is the world’s second-largest private yacht, measuring 162 metres. The elegant lines of her steel hull and aluminum superstructure – the work of renowned designer Andrew Winch, disguise Dubai’s incredible size. Her stunning interior was designed by Platinum Yachts. Dubai’s luxurious interior design blends bold colors with fine fabrics and intricately detailed handmade mosaics. A spectacular staircase creates Dubai’s showpiece. Bathed in natural light from the top deck, this dramatic circular staircase features glass steps, changing color. Dubai’s spacious decks offer a split-level owner’s deck, a large social area including the main lounge with its centerpiece red sofa, numerous VIP and guest suites, and a crew area to accommodate 115 people, including crew and guest staff. With seven decks, Dubai has a wealth of sunbathing areas, a striking mosaic swimming pool, and several Jacuzzis. She can accommodate a helicopter of up to 9.5 tons and can carry two 10-meter long tenders. Dubai has a displacement of 9,150 tons yet can reach an impressive 26 knots at maximum speed. She has the exceptional worldwide capability with a range of 8,500 miles at 25 knots, powered by four MTU diesel engines. 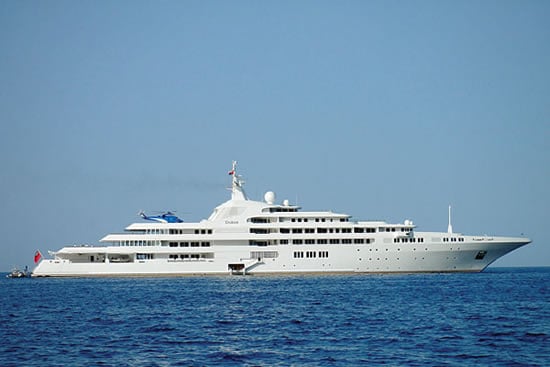 1.Eclipse
Russian Billionaire Roman Abramovich is the owner of this giant yacht, which is believed to accommodate 36 guests in 18 cabins and also cater for a staggering 70 crewmembers. Amongst the armada of lavish extras thought to be on board is a three-person leisure submarine, two swimming pools, one of which is 16-metres long with an adjustable depth feature that allows it to be converted into a dance floor. Other extras include an exterior fireplace and six tenders, as well as accommodation for three helicopters. Motor yacht Eclipse, completed at the end of 2010 at the Blohm + Voss Hamburg shipyard, features interiors by Terence Disdale Design and is the world’s largest superyacht. At 164m, Eclipse’s unprecedented size had ensured her construction had been shrouded in secrecy, and as such, subject to much rumor and speculation from both the international press and superyacht enthusiasts. Although details of the luxury megayacht are extremely well hidden, it is known that her interiors feature designs by the renowned London-based team at Terence Disdale Design. 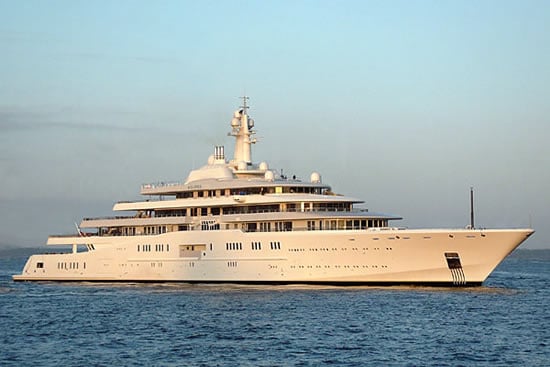 Honorable Mention –
When completed, Azzam will top the list of the world’s largest yacht as it will spread over 590 feet for an estimated cost of $620 million.
[CNBC]

Tags from the story
Top-10, Yacht