I shamelessly admit that I’m one of those people who find it incredibly difficult to let others drive their car(s). And that’s despite the fact that I own a mundane econobox that no one really cares out. However, a lot of exotic car owners happily invite popular influencers over and let them have a go in their prized machines. Supercar Blondie is probably the most famous of these automotive-themed YouTubers who mostly create videos by driving privately-owned super-rare cars worth millions of dollars. She recently landed up at renowned real estate mogul and luxury car collector Manny Khoshbin’s place and got the chance to drive his bespoke Bugatti Chiron Hermes edition, which nearly ended in a very bad way.

Manny Khoshbin himself is a popular YouTuber and posted a video on his channel titled: “Supercar Blondie almost wrecks my Hermes Bugatti Chiron!” While the video begins with many giving Supercar Blondie a tour of his garage that is full of some of the rarest automobiles. The video also includes Manny’s new McLaren Speedtail. It is followed by a drive in the Hermes Chiron with Manny behind the wheel. After a short while, Manny announces he will let Alex Hirschi, aka Supercar Blondie, drive the Chiron. Right after jumping into the driver’s seat, the influencer comments on Chiron’s incredible power; that’s when she almost crashes into a black SUV while taking a U-turn.

A post shared by Manny Khoshbin "Never Give Up" (@mannykhoshbin)


From the video, it’s not quite clear if Alex was to be blamed for it or the SUV driver failed to notice the hypercar. Nevertheless, it was a narrow escape and the crash could have been very ugly. The bespoke Bugatti Chiron lives to see another day. Created in collaboration with the French design house, the one-off Chiron Hermes edition took more than three years to complete and was delivered to Manny in 2019. The hypercar is finished in a special off-white paint on the outside and features a matching interior with a contrasting passenger seat upholstered in orange leather. While Manny never revealed its pricing, Supercar Blondie calls it “a $4.5 million car.” The question is, will Manny ever let anyone drive his cars after this incident? 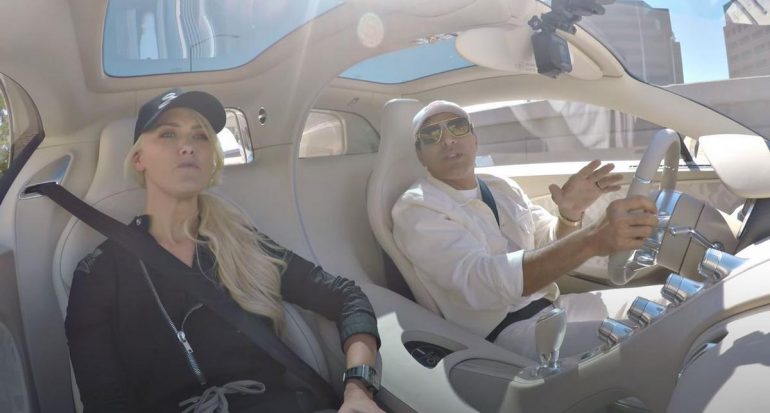