Seventy years after the Hindenburg disaster brought the golden age of the dirigible to a fiery end, a new era is about to begin. The world’s biggest airship is set to make its first commercial flight over Tokyo later this week. The craft- Zeppelin NT is 75 meters (246ft) long and will take passengers between 300-600 meters above Tokyo at speeds of up to 50 miles an hour. The German firm Zeppelin Luftschifftechnik has built the airship. Flights offered to include regular weekend and holiday flights over Tokyo from this Friday. Plus there is a night flight on Christmas Day and a sunrise excursion on New Year’s Day lined up. The helium-filled ship will take passengers on a 90-minute trip. It’s interesting to note that the length of the Zeppelin is about the same as a jumbo jet, but its cabin has space enough to accommodate only eight passengers and an attendant. Also, there is a restroom aboard the craft.

The airship’s steep ascent will be powered by three 200 horsepower engines, plus it can hover motionless above the Japanese capital’s skyscrapers offering travelers spectacular views of the skyline. Tickets will cost 126,000 yen ($1,158) for daytime flights and 168,000 yen ($1,543) for those at night, says its owner, Nippon Airship. Japan Travel Bureau plans to operate104 flights in Tokyo in the coming weeks. It also hopes to extend their services in other parts of Japan in the spring, possibly to include trips over imperial burial mounds in Osaka and Buddhist temples in the ancient capital of Kyoto. 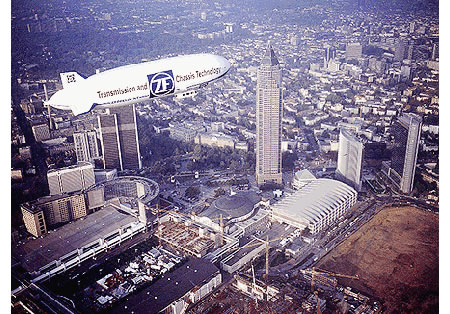