If Marrakech needs a song dedication, it would be Bohemian Rhapsody by Queen. Marrakech has the raw appeal of an Arabian fairy tale and is one of the most diverse and vibrant cities in the world, rich with history, tradition and culture. It is widely known reputed as the red city of Morocco in honour of the walls built of red mud holding up monuments and buildings that have braved several centuries. From exotic food to exquisite landscapes, the land is rich with close to everything a discerning traveller would seek. In the role play of a happy marriage, this Moroccan city is a harmonious union of two identities, or parts – the old town and the new town, with the backdrop of the majestic Atlas Mountains.

As is Morocco as a whole, Marrakech is an expression that needs to be experienced. LuxuryLaunches along with the concierge of one of the city’s prime hotels Royal Palm Marrakech help you discover this Bohemian dreamland, while missing out nothing! 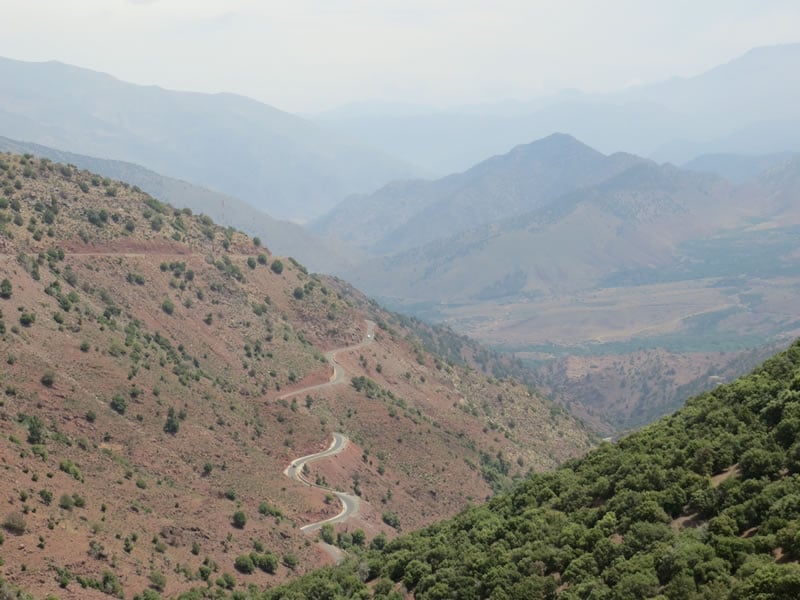 Top Day Trip – Hike up the Atlas Mountains:
The Atlas Mountains are North Africa’s greatest mountain range and a popular trekking destination. There are many villages across the valley inhabited by the Berber tribes, descendants of the pre-Arab population of this region, in mud-thatched houses.

The mountain is split into three parts – Middle, Anti-Atlas and High Atlas. Forest walks are ideal in the Middle Atlas, while the Anti-Atlas range is great for walking and riding through several scenic routes including the alley of almond trees. The High-Atlas peaks offer a myriad of activities such as trekking, walking, hiking, biking, skiing and rock climbing as well as white water sports. While trekking is a main draw, visitors can also enjoy pure Berber hospitality by dining with the locals. This range also consists of Mount Toubkal – the second highest peak in Africa after Kilimanjaro. 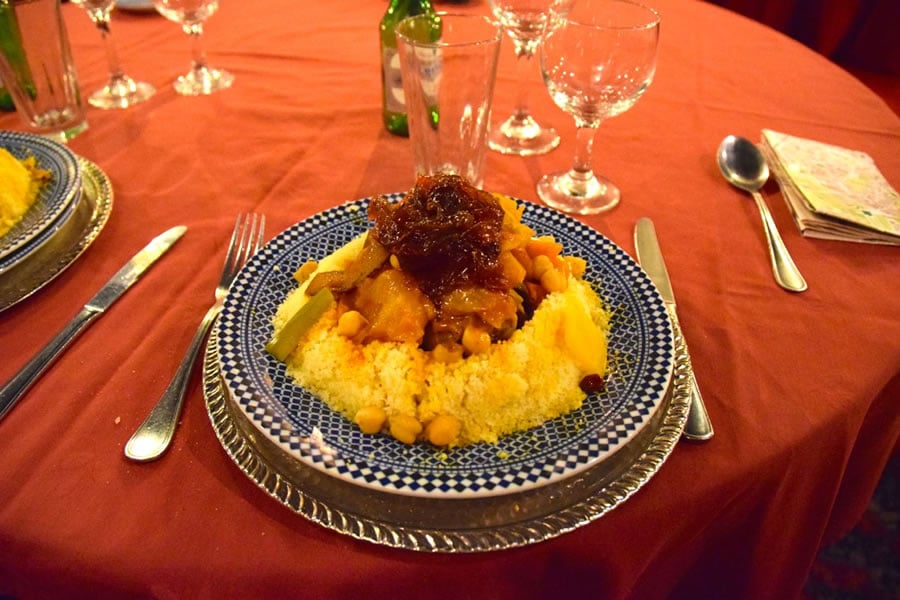 Must try dish:
Couscous – a traditional Berber dish which consists of tiny granules made from steamed and dried durum wheat. It is steamed and used with meat or in vegetable stew.

Berber tagine – A tagine is a symbol of Morocco. It is a slow cooked stew made of meat and vegetables using an earthen pot. The pot, called tagine, is a flattened earthen base with a lid shaped like a long snoot. 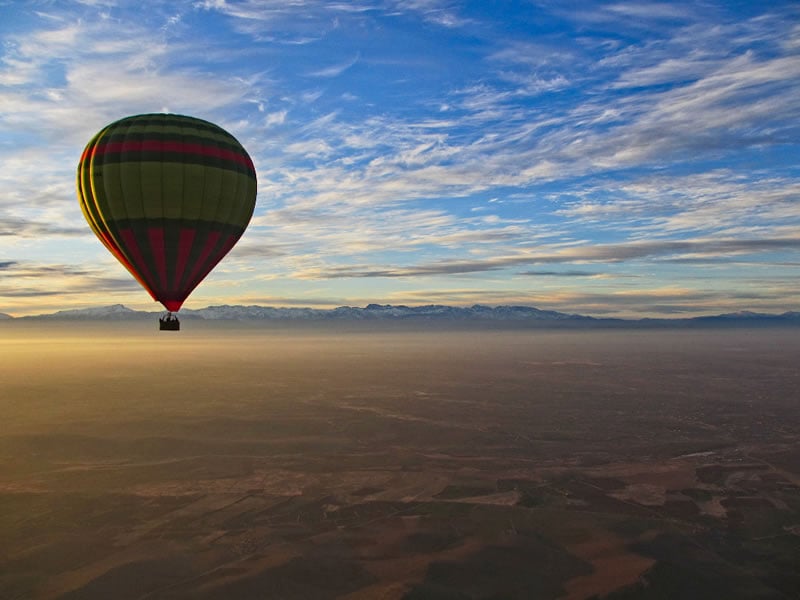 Best activity Excursion – Hot air ballooning:
Times have advanced but certain charms of the past can never die, and that you will experience in Marrakech as you sail through the sky in a hot air balloon. The aerial trips offer captivating views of the plains, acres of desert land, secluded oases, red Berber villages and white snow-capped mountains. Once grounded, the trip can be completed with a fine cup of mint tea and Moroccan pastries. 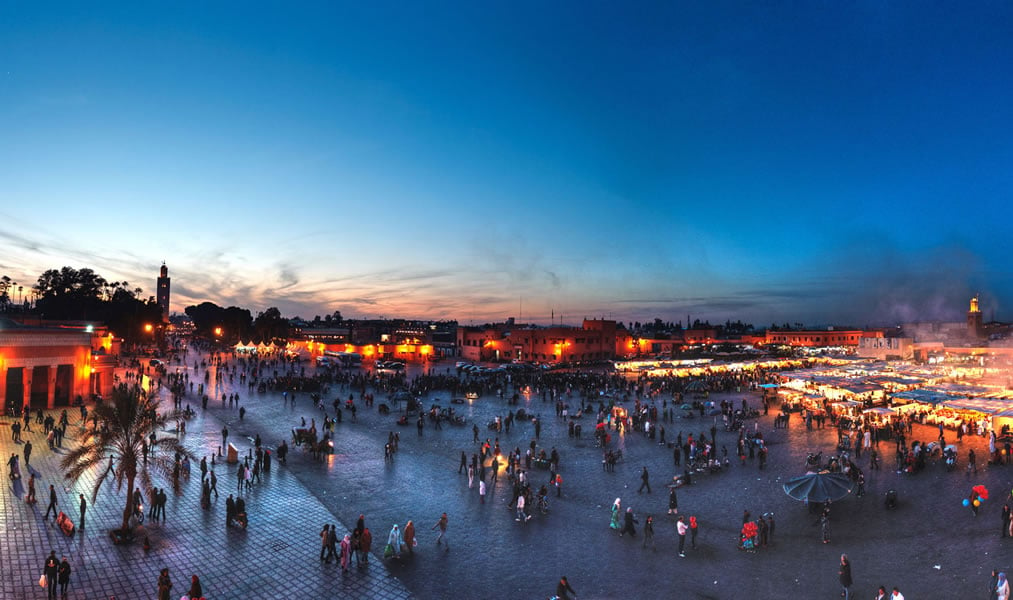 Best View – Café France:
Café France is located in Jemaa el Finaa, a UNESCO-recognized main square and open-air theatre situated in the heart of the medina. The view from the café’s terrace is considered to be the best in the city, especially during sunset, when it offers breath-taking views of the bustling square, the Koutoubia Mosque and the Atlas Mountains beyond them. 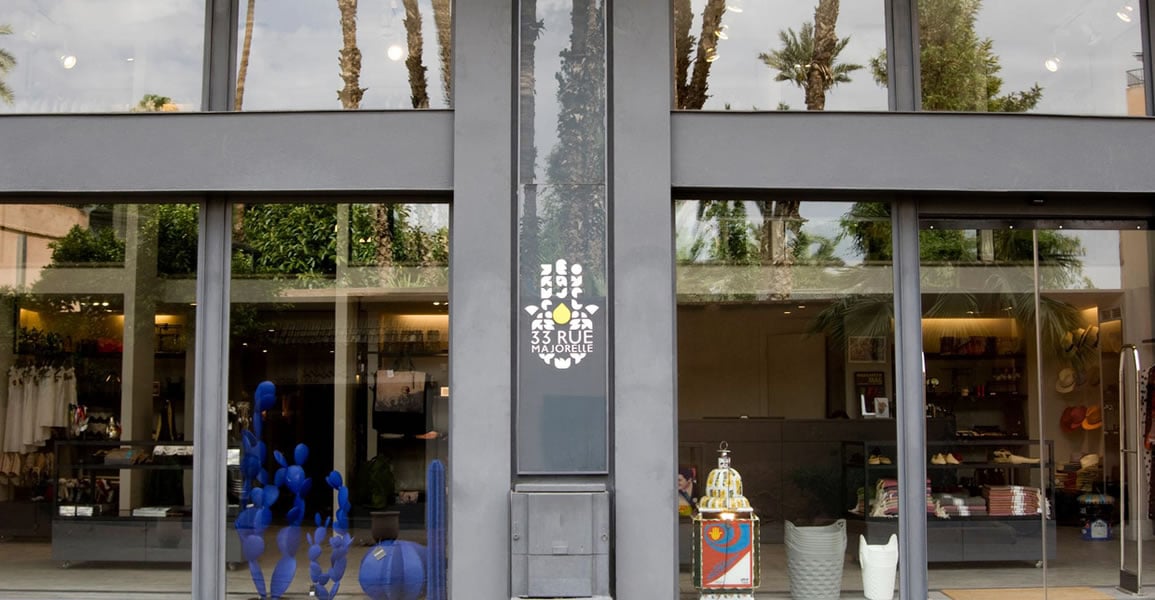 Best One Stop shop – 33 rue Majorelle:
For contemporary Moroccan fashion, beauty products, homeware and furnishing, this is it. The store is located in the medina and contains an art gallery and a snack bar. 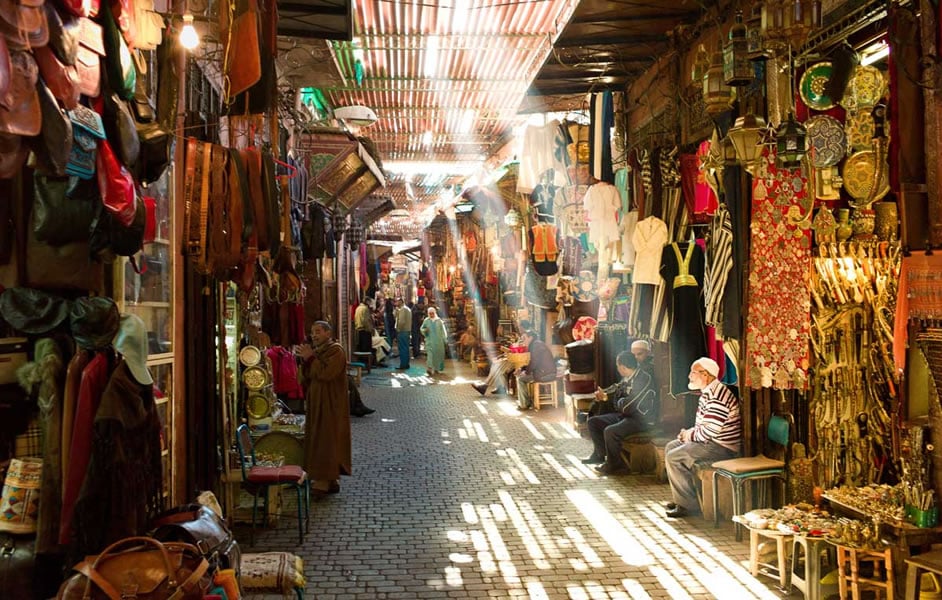 Best Place for local shopping – The souk in the medina
The souk is an organized chaotic network of stalls that sell anything you have ever imagined in a bazaar – from cooked snails to exquisite rugs. 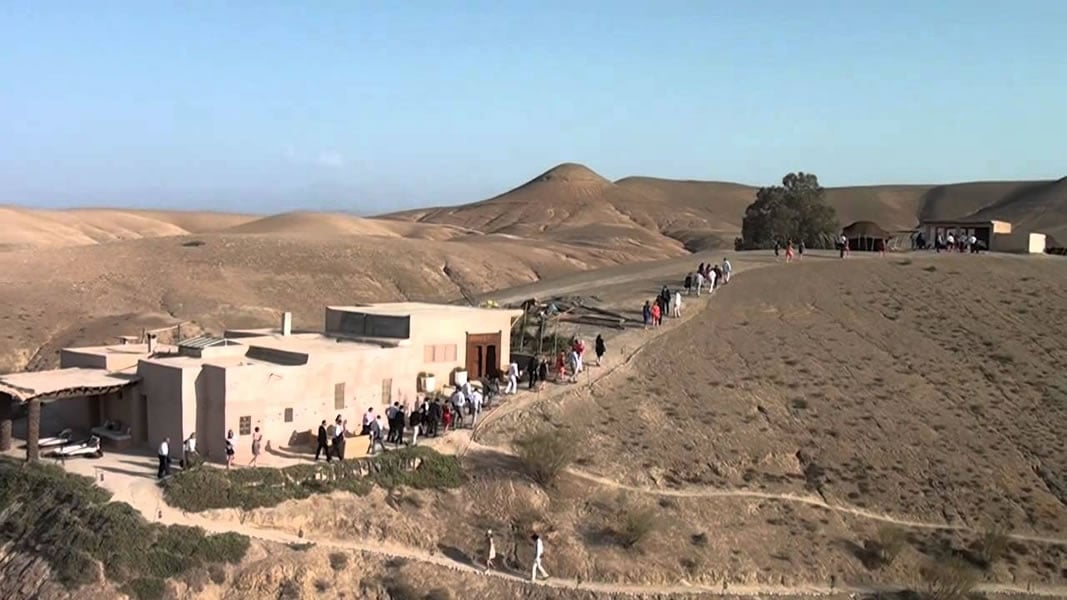 Best Family activity – Adventure tour, mountain biking, Terre d’Amanar:
· While in a desert, searching an oasis is essential. La Pause is a resort which is no less than oasis in the desert featuring mud-straw exteriors protecting comfort with a touch of Berber tradition. Camel rides, mule rides, golf, mountain biking, and also sleeping like a nomad in a make shift tent in the resort’s premises are some of its fin activities.

· Biking in the Atlas: Mountain biking in the midst of fresh, desert air can be a rejuvenating experience.

· Terre d’Amanar: an hour’s drive from the medina, this is a serene riad (or hotel). It features ecolodges and goat fur Berber tents for accommodation and guests can enjoy a myriad of fun activities, such as trekking, polo, mule rides, cycling, camel rides, archery as well as children’s park and craft workshops. But what takes the pie, is the zip lines and walkways through the mountains. 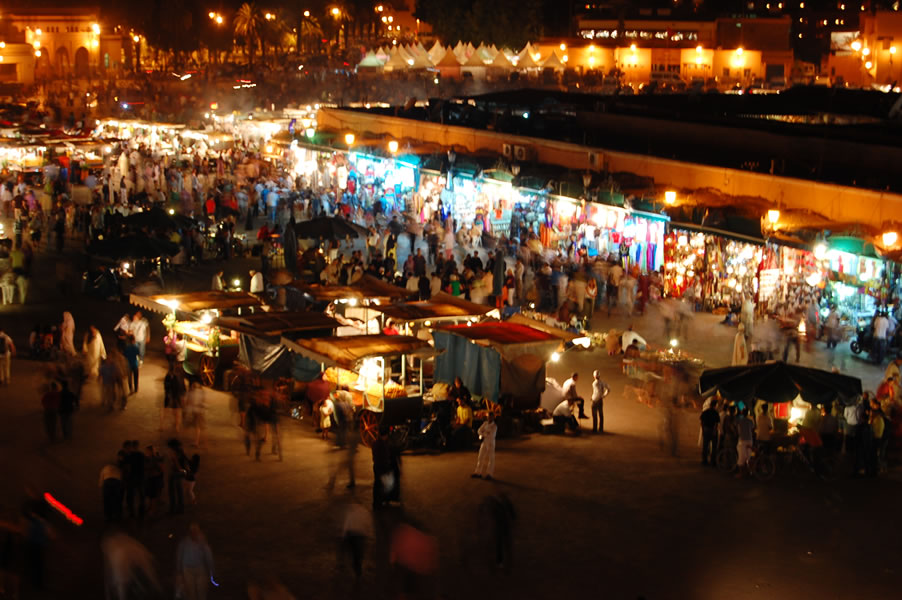 Best cultural secret – Old town souks
As in Disney’s Aladdin, the old town, or medina, bustles with activity. Visitors will be easily charmed by the narrow maze-like streets where no vehicles can pass and stalls that sell perfumes, spices, vegetables, oriental rugs, with vendors shouting out and waving their wares in air to passersby. the souks also gives the opportunity to witness craftsmen at work; from leather goods makers, tailors, embroiders to woolen hat knitters. 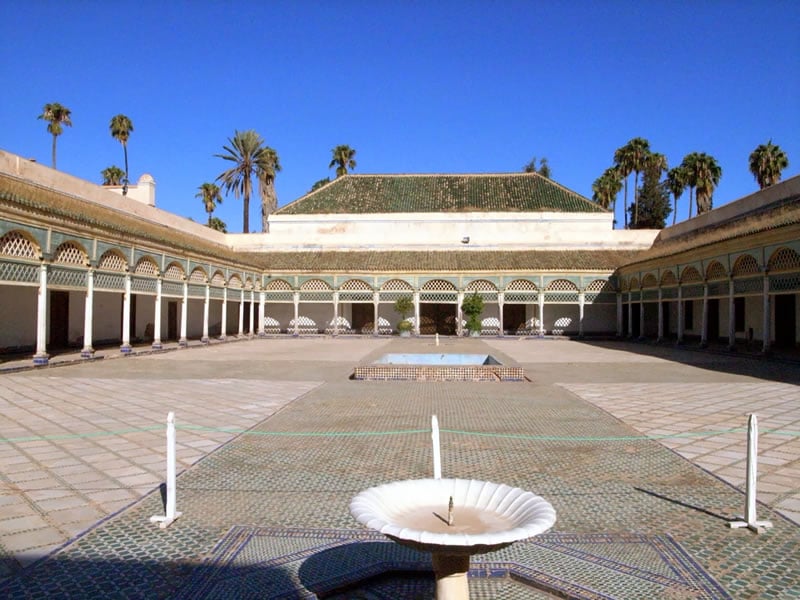 Top architecture find – Palais Bahia:
Spread across two acres and featuring 150 rooms, this 19th century palace was set up by Si Moussa the grand vizier of the Sultan and further embellished by slave-turned-vizier Abu Bou Ahmed. It is decorated beautifully from floor to ceiling and was built over 14 years with the ambition to become the greatest palace in the world, and hence wishfully named Bahia which means brilliance. It consists of grand and petit courts, an old ornamented harem and courtyards. It also features an Andulasian garden. 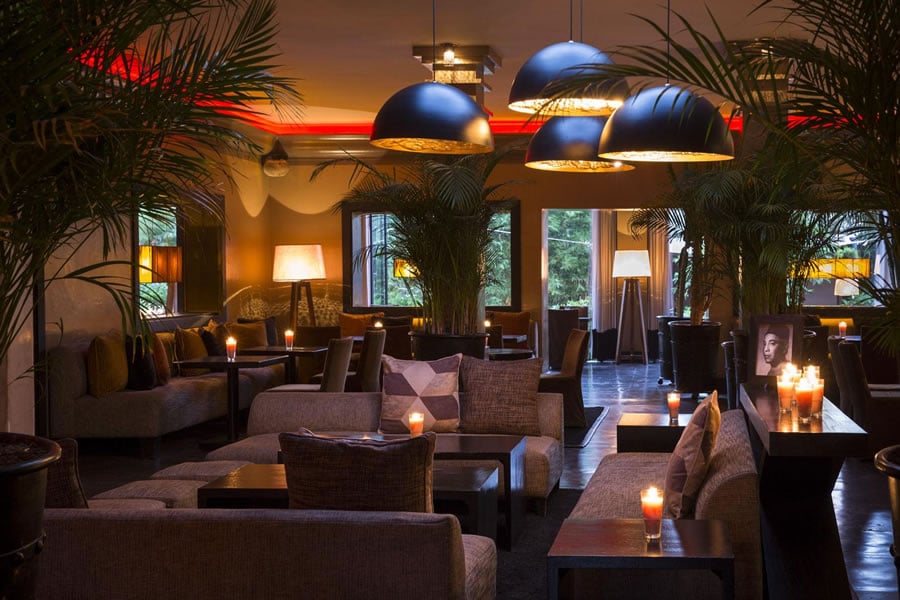 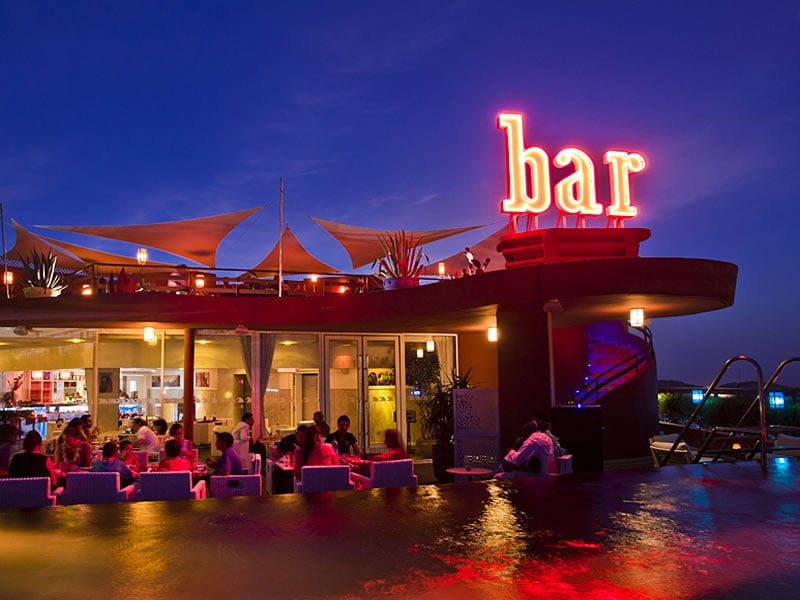 Best cocktail with a view – La Renaissance:
Located in Guéliz, the nouvelle ville or the modern part of the city, is La Renaissance. Built in 1952, it was the first modern hotel in Marrakech. Today it is one of the tallest hotels in the city, with seven stories, and one of the few centrally-located urban hotels. 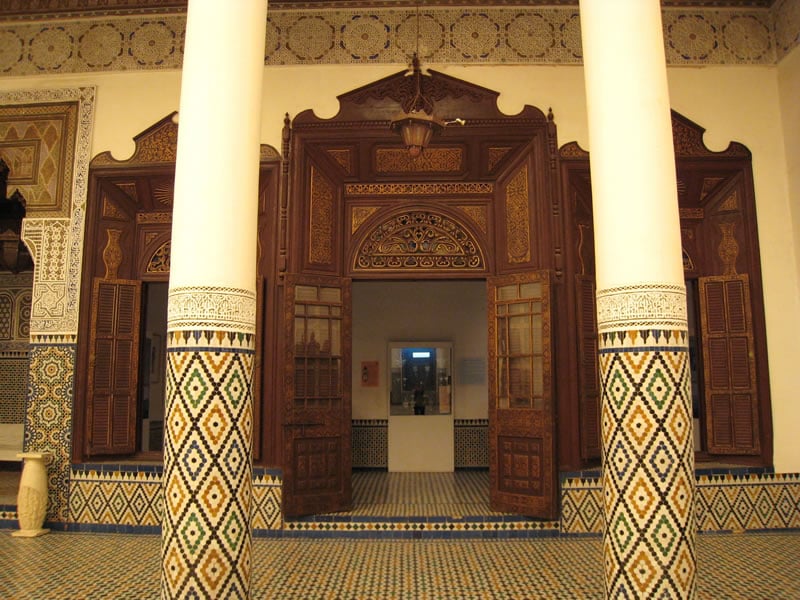 Museum must see:
· Berber Museum – The city dates back to the reign of Almoravides, a Muslim dynasty of Berber warriors that ruled from 1049 to 1145, and was initially considered to be a fortress. Berbers or Imazighen form the foundation of indigenous North African people, with their origin believed to stretch back more than 9,000 years. Located in the Majorelle Garden, the museum displays the fascinating culture of the Berber people. It also displays the personal collection of French designers Yves Saint-Laurent and Pierre Bergé.

· Dar Ssi Said – Housed in an opulent palace, the Dar Ssi Said houses artifacts and articles dating back centuries including decorated weapons, Berber jewellery, Hispano-Moorish decorations, cedar wood complete with intricate carvings, reproduction of salons, variety of ancient carpets collected from around the world and so on.

· Musée de Marrakech – The Museum of Marrakech is housed in the Dar Menebhi Palace, built at the end of the 19th century. It boasts a classical Andalusian architecture, with fountains, traditional seating areas, a hammam and intricate tilework and carvings. It exhibits modern and traditional Moroccan art, historical books, coins and pottery of Moroccan Jewish, Berber and Arab cultures. 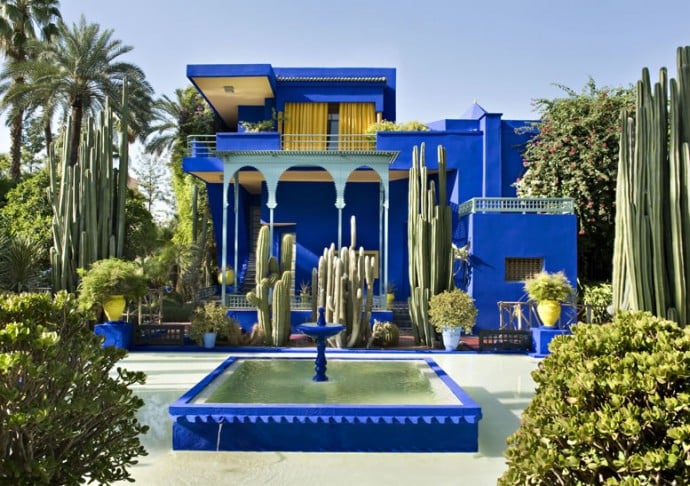 · Majorelle Gardens: This is a botanical garden, spanning 12 acres, located in Gueliz and is filled with olive groves and palms. It was designed by the French artist Jacques Majorelle in 1924, and was recently redesigned to add gift shops and new trees and plants.

· The Ben Youssef Medersa – This is an Islamic school adjacent to the Ben Youssef Mosque. It was founded in the 14th century and rebuilt in the 16th century. Exquisite wood work is seen around the buildings which feature a large courtyard with a central pool for ablutions and a prayer hall. The interiors are also artistically designed, all projecting the intense craftsmanship of a bygone era.