In a strange attempt to make an in-flight safety video more “relevant” (and I’m not sure how that would even be possible) Delta Airlines decided to look to the internet for a bit of help. The video has been making the rounds and has perhaps not garnered the best kind of publicity, but perhaps that’s what they were looking for. From the multitude of data, helpful visuals, sayings, videos and inspiring people that exist on the internet, someone on Delta’s visual marketing crew thought it might be a fun experiment to use Memes to make the safety video more relatable… bad idea! 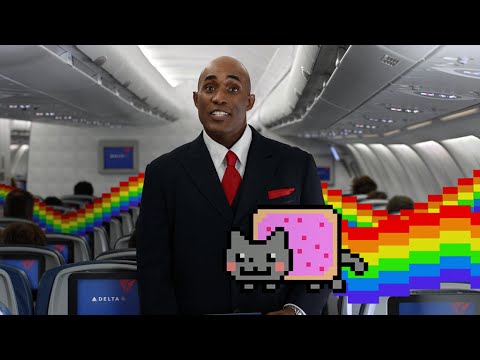 For starters it’s a six minute long video which is much too long as it is; one tends to lose interest after the first minute and could perhaps fake about 20 seconds more. Most passengers simply go through the motions just to get to the entertainment system that’s on the other side of this message. Now just to be clear, I fully understand that the video/live demo in the aircraft is absolutely essential, not just from the airline safety norms perspective but especially for first time flyers or those always a little apprehensive about flying, but this was simply uncalled for!

Incorporating all kinds of popular memes thrown in willy nilly to add some comedic flare to the otherwise mundane video, characters like Nyan cat, Annoying Orange, Charlie bit my finger again (and he really couldn’t have in this instance seeing as he had a mask on), the Overly Attached Girlfriend and so many many many more that it gets wantonly ridiculous after awhile and looses track of the actual relevance of the video. Maybe it’ll help put people at ease and maybe it’ll even help relieve any tension felt before takeoff, but let’s be serious for a moment, when the pilot pops up in the cockpit showing off a Mentos that’s followed by a shot of Mentos-Coke bottle explosions, that makes me wonder just how seriously he’s taking his job.

All in all, it’s a whacky take on the video that’s designed to make the entire process of watching the in-flight safety instructions a little less cumbersome… unfortunately, and this is just my opinion, it has failed! Were it shorter and more concise it might have been a much better experience; and I cannot fathom what kind of uppers the host of the video is on, but perhaps he needs to cut back as well. Air France also tried to deviate from the norm with their own version of a fun and colorful safety video; they managed to keep it under five minutes and keep it interesting, glamorous and instead of in-your-face humor, they chose a more subtle approach was quite clever.

Tags from the story
Airlines, Delta-Airlines