There shall be light, not at the end of the tunnel but at the center of the dazzling city of Amsterdam. For 53 days, starting tomorrow, visitors to the Netherlands’ capital will be bedazzled by 30 unique entries to this year’s light festival. A star of the collection is an installation by Serbian duo which pays tribute to the city’s legendary art maestro, Vincent Van Gogh. Their artwork “Starry Nights” named after the artist’s famous painting. Architect Ivana Jelić and creative engineer Pavle Petrović created the artwork using brushstrokes by 1400 acrylic rods illuminated by LED lights. Located on a bridge on the intersection of two canals, the contemporary interpretation replaces Van Gogh’s original background of a hillside village and trees with the city’s bridges and houses. The artists aims to raise awareness on light pollution in cities and bring the spotlight on proper lighting system designs. Set in a backdrop of orange polluted skies of Amsterdam, the message comes loud and clear. It also pays a tribute to Van Gogh’s love for starry nights, something he very much enjoyed and reproduced on canvas. 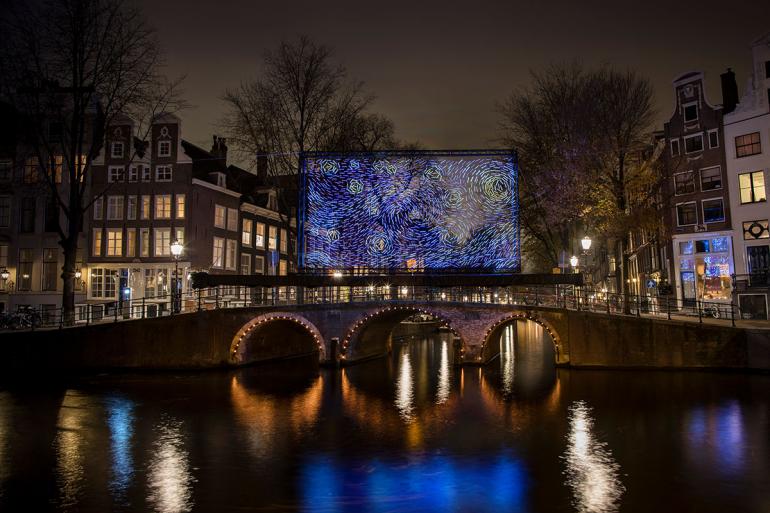 Other works of art at the festival include Spider on the Bridge created by a group of French artists, Parabolic Lightcloud by an Australian duo, Light a Wish by two Israeli artistic directors, and Optilli by an England-based studio.

Tags from the story
Amsterdam, Van-Gogh