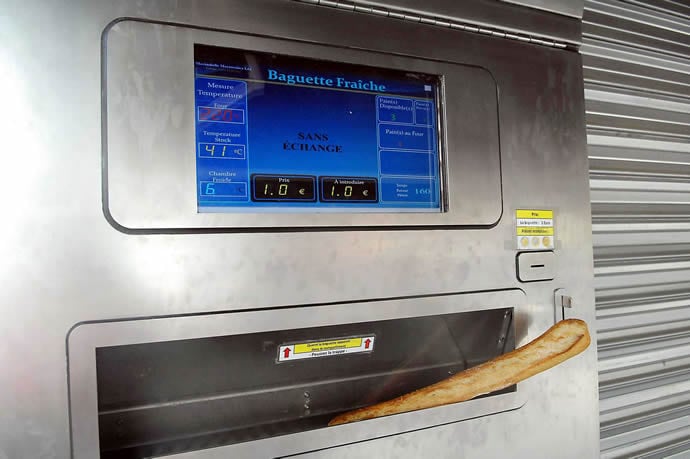 9. Baguette Vending Machine –
Automats are best known for selling food items so let’s start with a vending machine that dispenses eatables. While vending machines are convenient to store and sell canned or packaged edibles, the idea of automats vending freshly prepared food seems a little odd especially if we are talking about baguettes in France as we all know – French love their bread. Even the thought would be considered as a sacrilege, but French baker and entrepreneur Jean-Louis Hecht took advantage of the August holiday period, when most of the bakeries shut down, and installed the country’s first baguette dispensing automat in Paris. The biggest advantage of the baguette automat is that it operates 24/7 and delivers hot and crisp baguettes for just 1 Euro. 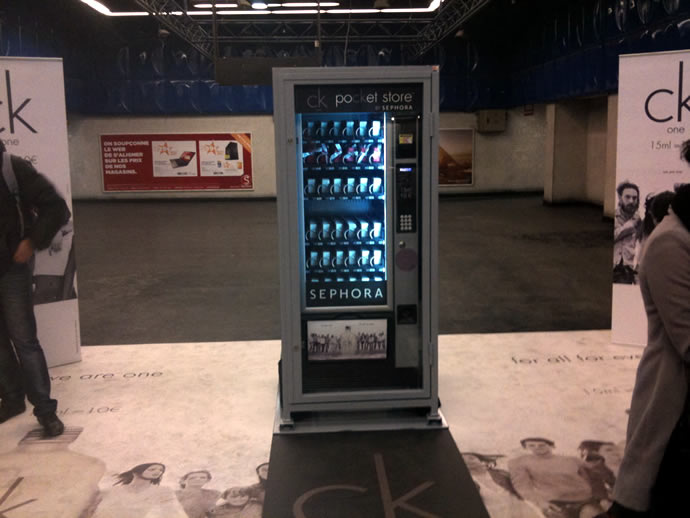 8. CK Pocket Store –
Vending machines can be sometimes a lot more than just retail units. The humble machines can be effectively used to advertise or push a new product into the market as the brand visibility increases by many folds when a product is displayed through strategically placed vending machines. Beauty retailer Sephora chose vending machines to create a market buzz for new CK One fragrance. The company installed automats named Pocket Store in four metro stations in Paris to sell small 15ml bottles of CK One. The 15ml limited edition flacons were perfect for spontaneous purchases and it was a great way to introduce the product into the market. 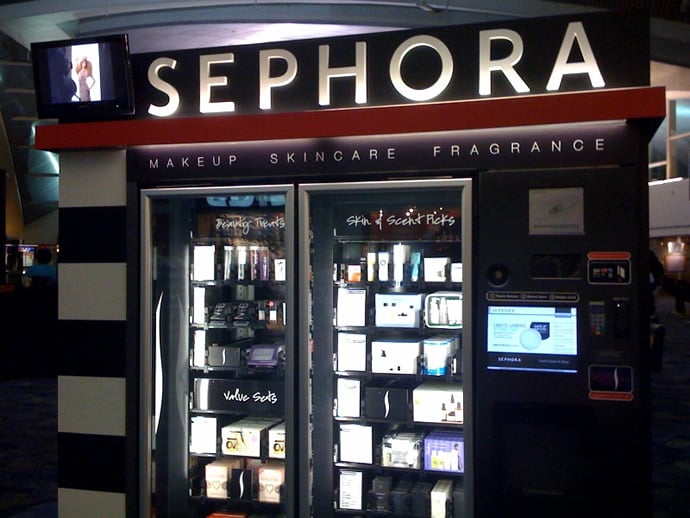 7. Sephora Vending Machine –
The Sephora vending machine is the best thing a man could ask for! Ok, that doesn’t sound right, does it? But think about it this way; most of the guys hate shopping and even more when women spend most of their time walking through the aisles trying out new cosmetics. This is where the Sephora vending machine comes in. The make-up emporium has created a number of vending machines with 50 of their most popular make-up, skincare and perfume sets. Just swipe a debit or credit card and make-up items from a variety of brands, including Bare Escentuals, Korres, Smashbox, Juicy Couture, Dior Beauty and more. As of now, the vending machines are available at a variety of airports across the USA, including, New York, Las Vegas, Dallas and Houston. 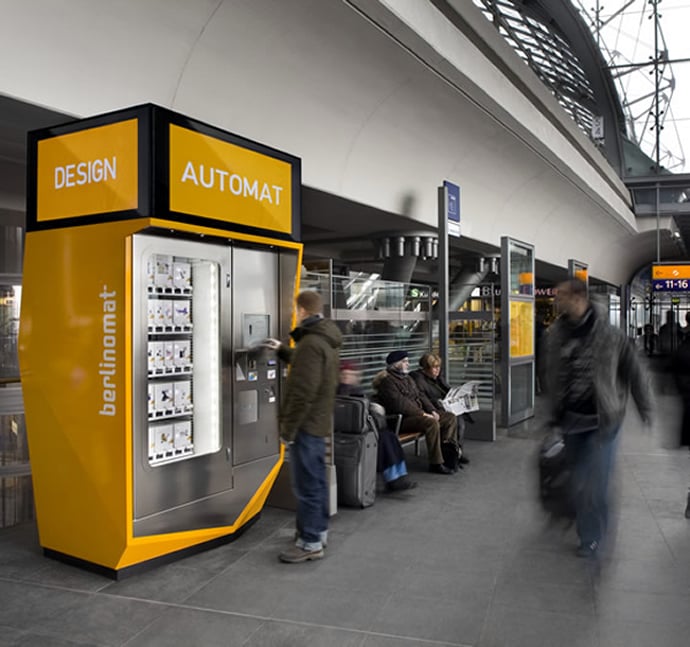 6. Berlinomat’s Design Vending Machine –
The vending machines might have become more technologically advanced and lesser prone to malfunctions, but one thing that hasn’t much improved in the last few decades is the dreary designs of the usual automats. Most of them still look very boring and put off customers from using them. But a German design shop Berlinomat worked with Berlin-based design firm Coordination to give a refreshing upgrade to the humble vending machines. Named the Design Automat, the machine carries a great design that instantly pulls the attention of people passing by it. Painted in yellow, the automat has sharp lines on the body and has an attractive brushed aluminum finish on the front. The machines house 42 different Berlin-made design goods and feature a touch screen interface with animated product descriptions. The Design Automat is definitely one of the best looking vending machines we have ever come across. 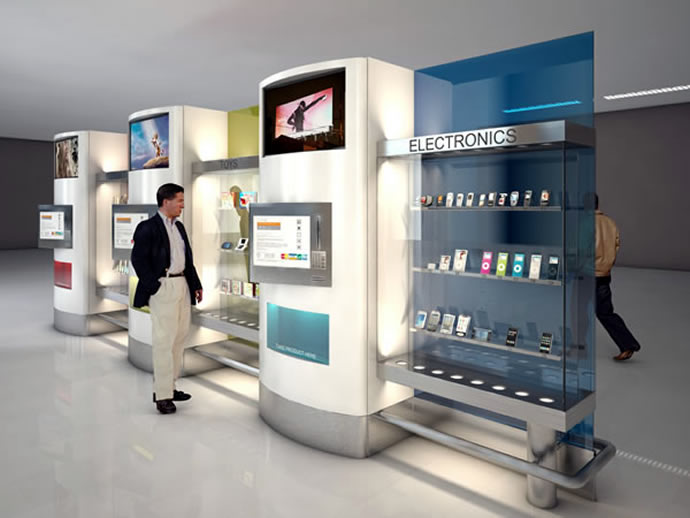 5. The Shopping Wall –
One of the best things about a vending machine is that it eliminates the need of any kind of interaction with sales representatives and storekeepers. Especially while buying electronics; salesmen have the knack of completely changing your choice and selling you things which you never wanted in the first place. Amsterdam-based company “Automated Retail Concepts” came up with a concept which plans to revolutionize travel shopping with an innovative new retail model called ‘The Shopping Wall’. Rather than a series of vending machines, the Shopping Wall is a stand-alone fully automated retail shop that sells everything from cosmetics to electronics like iPod and smartphones. “The Shopping Wall puts the focus on the products and the retail experience instead of on the technique of the vending machines itself – it’s all about emotion,” said a representative from the company. Each machine is made up of two main parts: On the right is a glass showcase where the products are displayed in full view (without the packaging) and highlighted by spotlights against a colored glass backdrop. The left hand side comprises the product dispenser, a 32-inch LCD monitor where advertisements can be displayed, and a 19-inch touch screen where customers can browse for detailed product information and pay for their purchases. The Shopping Wall is best suited for airport duty free shops and can make the shopping experience hassle-free. 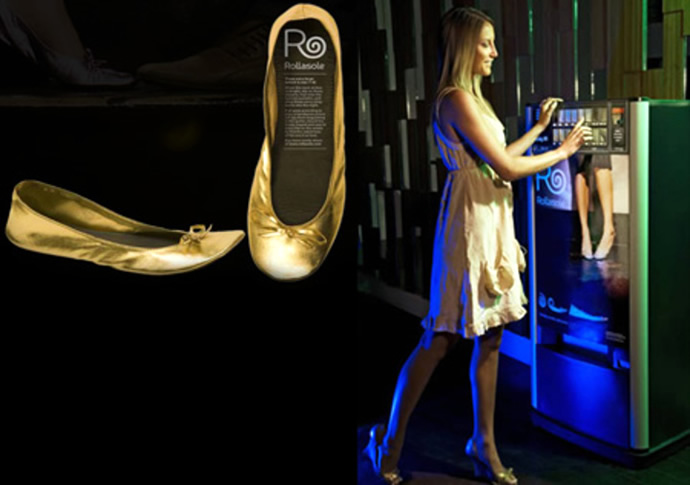 4. Vending machine that sells flats in clubs –
There is no doubt that looking good gets more priority than wearing that’s more comfortable and practical, especially when dressing for a club. How often have you seen girls take off their high heels to dance at clubs? It’s a very common sight, but genius Brits have come up with a brilliant solution to tackle this nasty and also potentially dangerous problem. Clubs in the UK have vending machines that sell flats for only £5. There are two companies that sell shoes through these vending machines; Afterheels and Rollasoles. Afterheels offer flats that are made of 100% natural and fully recyclable materials. The shoes even come with a bag to put your heels in. The Rollasole shoes are for those who want to look good even while dancing as its design is funkier and has a metallic bow. 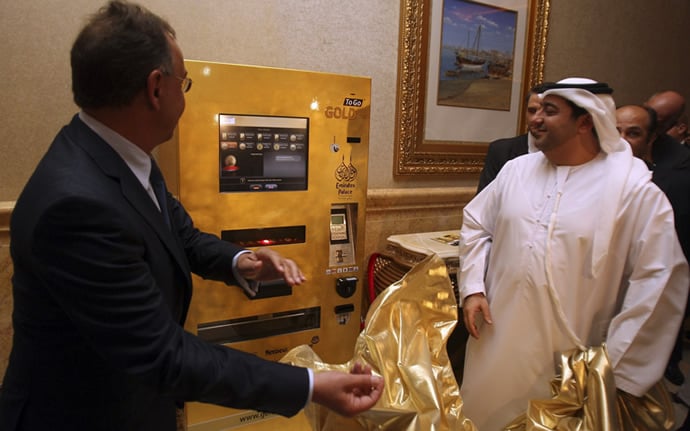 3. Vending machine that sells gold –
When vending machines can be used to dispense cosmetics, shoes, office supplies etc. then why can’t it be used to sell jewelry and precious metals? Touted to be the most expensive hotel, Abu Dhabi’s Emirates Palace had introduced a first-of-its-kind ATM-style kiosk back in 2010. The machine can dispense small bars up to 10 grams or coins with customized designs. German entrepreneur Thomas Geissler was the brain behind the gold dispensing ATM concept and it was developed by TG Gold-Super- Markt, a brand of Ex Oriente Lux AG. 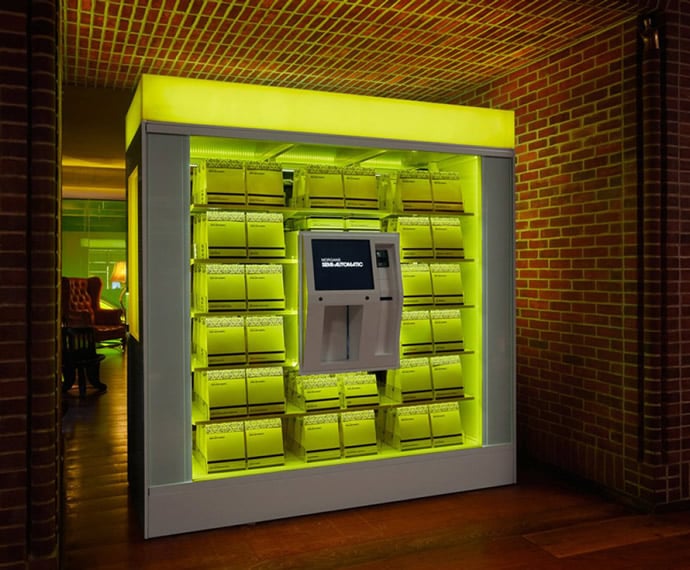 2. Luxury vending machine that sells diamond bracelets –
If you think the idea of selling gold coins and bars out of vending machines is pointless then how about a automat that dispenses diamond bracelets? In 2011, to celebrate Fashion Week in New York, USA, Hudson Hotel had installed a large vending machine in its lobby that dispensed fashion ‘necessities’ apropos to the occasion. The luxury items that were housed in the automat included items from upcoming and promising designers from the US. The luxury fashion items included a diamond and wood strand bracelet from Ruby Kobo, a python clutch from SANG A, hand-made 7-fold wool ties from Public School, and a rabbit fur jacket from Jolibe. 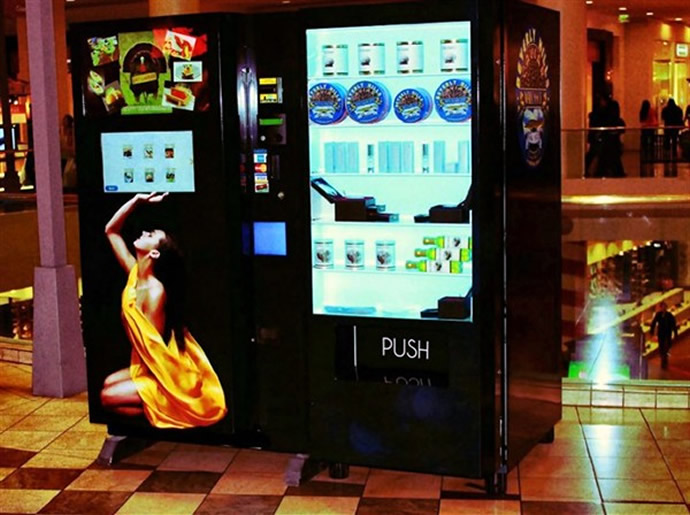 1. Caviar Vending Machine –
We have saved the best (or rather the wackiest) for the last. Automats dispensing machine prepared baguettes, pizza, subs and even salads are acceptable, but caviar? Gourmet food supplier, Beverly Hills Caviar, became the first to do so by installing vending machines in select Los Angeles malls that serve up fresh caviar, escargot, and other exotic goods, with prices for products running as high as US$500. The decision to operate caviar vending machines was termed as bizarre by many as the company is known for delivering luxury cuisine worldwide and just operates one by-appointment-only specialty store. But Beverly Hills Caviar saw the opportunity as a way to make its products more accessible to its usual clients as well as the general public. The machines are stocked with over 24 varieties of caviar from around the world, which range from the $30/oz American Black Caviar to the Imperial River Beluga, which costs a whopping $500 per ounce.

Tags from the story
Vending-Machine