You may think the ultimate way to travel in style to one of the major yachting festivals on the calendar would be by yacht.

Yet, when you’re surrounded by 500 of the world’s finest yachts for sale, you have to think outside the box a little to stand out. 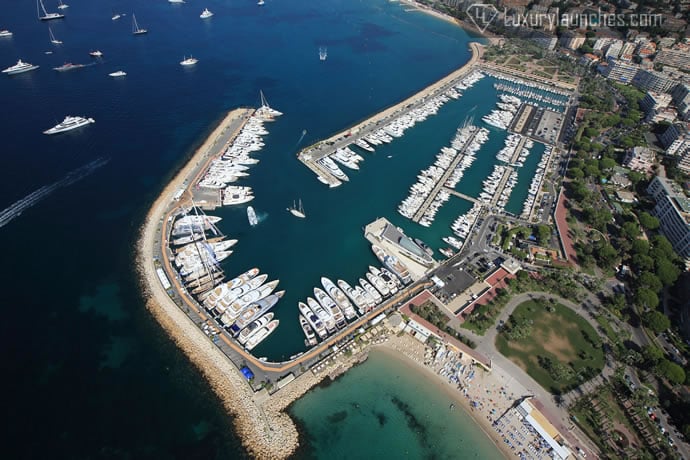 Last week I had the pleasure of attending the Cannes Yachting Festival. The 2014 edition was the 37th year that this prestigious event had been held, in the most chic setting imaginable – Cannes. This magical city on the southern French coastline oozes glamour all year round, and I was looking forward to exploring the new and innovative superyachts on display in both the Vieux Port de Cannes and the newer Port Pierre Canto, and strolling along the famed Croisette which links the two.

But little did I know that my most luxurious experience would be before I even arrived at the show. 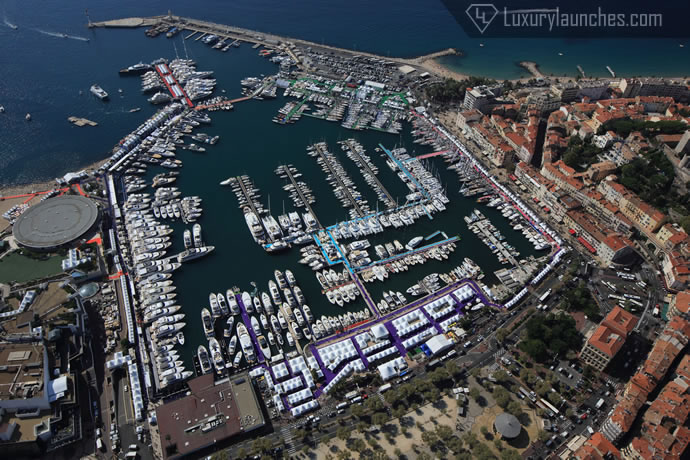 For I had been offered the chance to experience a Heli Securite luxury helicopter transfer to Cannes, between Nice Côte d’Azur airport and the Palais de Festival. Definitely an invite too good to refuse!

At the arrivals hall of Terminal One at Nice airport, France’s second largest, we were seamlessly led through to the VIP lounge and departure hall for our Nice helicopter charter. Heli Securite are the leading helicopter charter company on the French Riviera, and have redefined the concept of luxury helicopter travel. 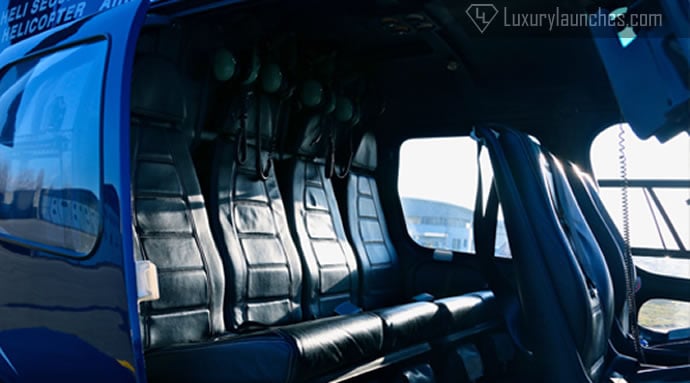 Our Dauphin EC155 Twin Engine was awaiting us, inside our cabin a bottle of France’s finest bubbles from Champagne ready to be popped. This model from their extensive fleet has the capacity to seat eight and carry ten suitcases. After an early morning start for our flight from the UK, the helicopter’s plush interior and leather seats were a more than welcome sight.

My biggest regret is that, with a cruising speed of 280km an hour, the transfer between Nice and Cannes takes less than ten minutes. I was tempted to ask our pilot to do a few more loops before landing! 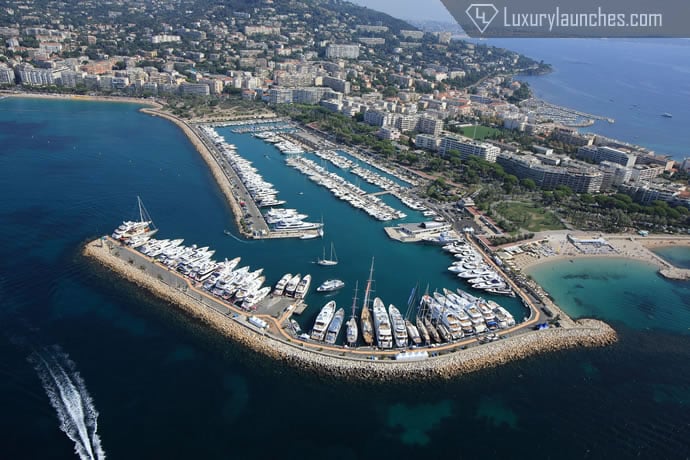 But it was enough time to realise that there’s no better way to travel between the beautiful cities of the French Riviera. After all, I had the best view of this sparkling stretch of the Mediterranean, all enjoyed with a glass of Champagne in hand. A helicopter transfer beats being stuck in the Côte d’Azur’s famous traffic gridlock any day!
What are the highlights that I spied from my bird’s eye view of the French Riviera?

One of them was an impressive Marina Baie des Anges, in Villeneuve-Loubet, one of the Côte d’Azur’s most iconic buildings, a ziggurat-like structure designed by André Minangoy. 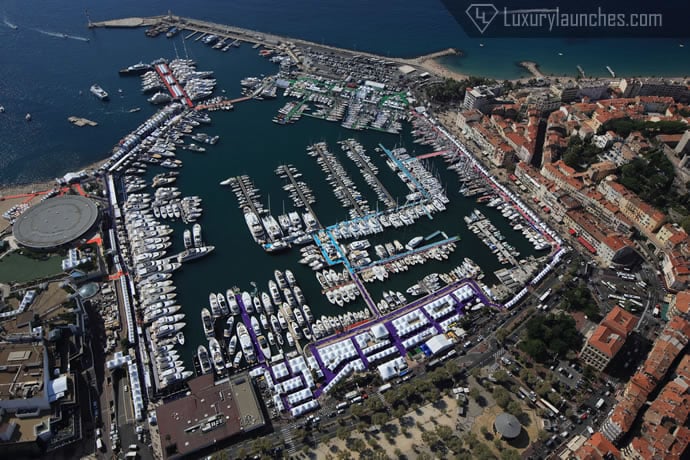 I also enjoyed the view of the majestic Cap d’Antibes, home to some of the most expensive real estate in the world. Not to mention the superyachts at anchor nearby, not a surprise since Antibes is the global luxury yacht magnet. From the air these yachts appeared almost as white dots in the sea.

And then, of course, the sight of les Iles des Lérins, two islands off the coast of Cannes, made for one of the Riviera’s best day trips. The Ile Sainte Marguerite is covered with a lovely, verdant forest and our pilot shared with us a story of how the Man in the Iron Mask was incarcerated here. He then went on to point out the monastery on Île Saint-Honorat. Apparently, the monks have a vineyard there, which produces a very reputed wine! 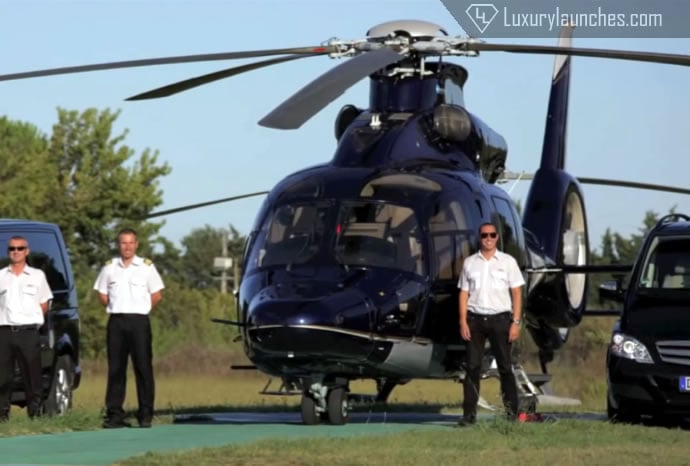 As we dropped down towards the helipad in Cannes, I noticed a chauffeured vehicle waiting for us. To add that extra element of class to their complete service, Heli Securite ensure that their clients are met by their own private chauffer and driven to their onward destination.

For me, that was the Palais de Festival and the Cannes Yachting Festival. However, after my wonderful transfer experience with Heli Securite, I think I’m now a helicopter convert! 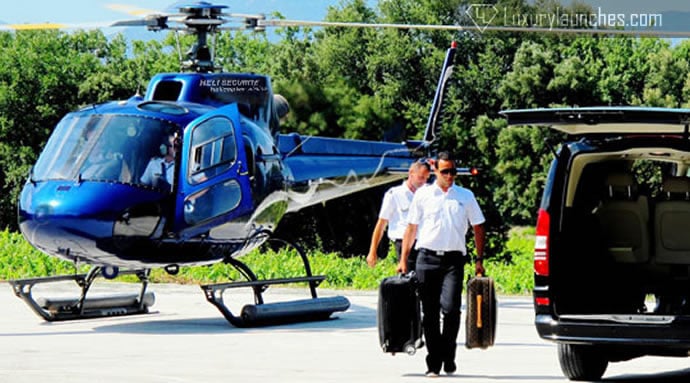 Heli Securite also offer transfers between Monaco, Cannes, St Tropez and Courchevel, meaning you can arrive to all your favourite French Riviera and Alps destination in the utmost style. Heli Securite have created the new ultimate in luxury travel!