Like every year, all the top luxury watchmakers in the world thronged to the Swiss city of Basel last month to introduce their latest and the best creations for 2015. Interestingly, the expo began a week after Apple launched its first luxury watch, the Apple Watch Edition, and many are considering it as a factor that might disrupt the Swiss watch industry. However, none of the companies looked perturbed or threatened and only some showed their willingness to adapt the new smartwatch technology in their broad plan. As the dust settles from Baselworld 2015, it’s time to have a look at the best and the coolest watches that were announced at the expo. Here’s our pick of 7 watches that stood out from the rest. 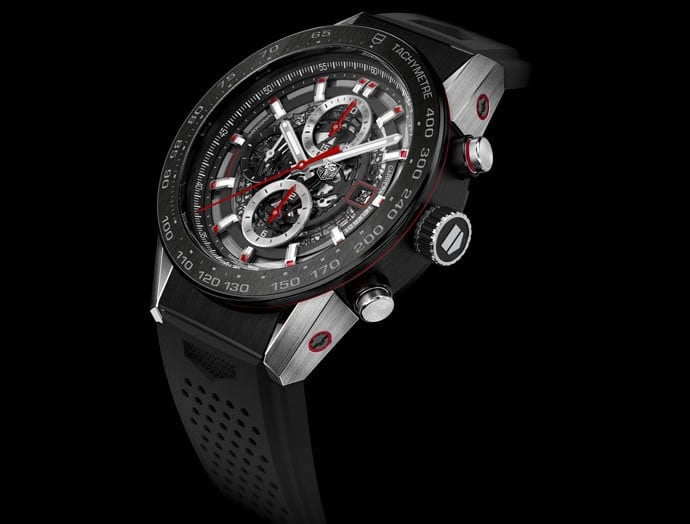 7. TAG Heuer Carrera Calibre Heuer 01
TAG Heuer has gone ahead with its intent to completely refresh its Carrera family this year with the introduction of the new Heuer 01. This is really the first demonstration of new boss Jean-Claude Biver’s vision for TAG Heuer. With this watch, Jean-Claude Biver has borrowed from his own success at Hublot by offering something that has the same type of look and appeal as the modern Big Bang, but with a more affordable price tag. The watch features an entirely new case, construction, design, and caliber, each of which is heavily divergent from the original. It has an open-face dial, revealing TAG’s new in-house movement, which also goes by the name Heuer 01. The new construction might not appeal to the TAG Heuer traditionalists; nevertheless, it looks amazing.
Price – The new TAG Heuer Carrera Calibre Heuer 01 comes with a price tag of 4,900 Swiss Francs ($5000 approx). 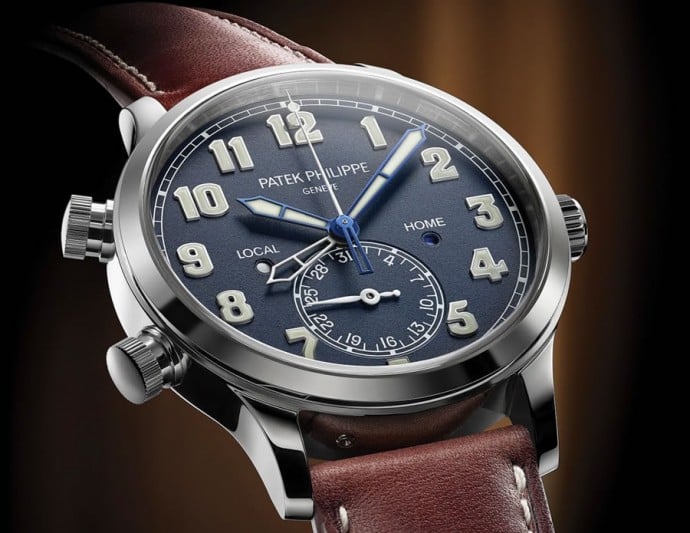 6. Patek Philippe Calatrava Pilot Travel Time
We have two Patek Philippe timepieces in this list and we begin with the new Patek Philippe Calatrava Pilot Travel Time watch. Last year, the Swiss brand introduced the amazing stainless steel Nautilus 5990 Travel Time watch, and for this year, they’ve continued the travel theme with the new pilot’s timepiece. The watch is based on old Patek Philippe hour angle timepiece that helped pilots calculate their position when used in tandem with a sextant and a radio. The case of the watch is 42 mm in diameter and 11 mm thick, and made of white gold. The strap is vintage brown calfskin with contrasting stitching and a matching white-gold pin buckle.
Price – $47,600 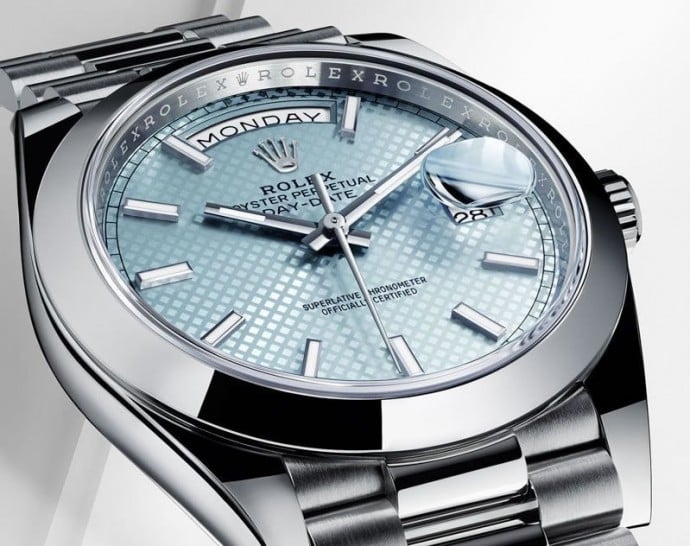 5. Rolex Day-Date 40
The Rolex Daydate, or rather known as the “president’s watch”, is perhaps one of Rolex’s most iconic models. For 2015, there is a new Rolex President, the Rolex Day-Date 40. The watchmaker has discontinued the Day-Date II 41mm watch in favor of this brand new Day-Date 40 but don’t mistake the new timepiece for a mere facelift. The new Rolex Day-Date 40 features a 40 mm case, a first for the President, with the sophisticated new calibre 3255 inside that boasts significant innovations including a new escapement and a three-day power reserve. The calibre 3255 is a state of the art movement equipped with the new Chronergy escapement, an extended 70 hour power reserve and most intriguingly, new lubricants that Rolex produces in-house. In addition to it, the bracelet links have new ceramic inserts for durability and comfort, the dial has more detailed hour markers and decoration, and the case has been carefully refined to optimize the experience.
Price – Prices for the 2015 Rolex-Day Date 40 range from 33,200 CHF ($34,000 approx) in Everose gold to 59,600 CHF ($60,900 approx) in platinum. 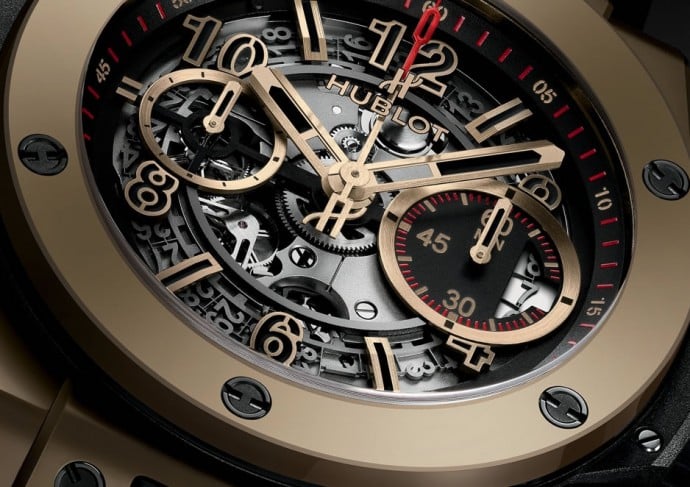 4. Hublot Big Bang Full Magic Gold
Hublot is celebrating the 10th anniversary of its now-iconic Big Bang collection in 2015 and the Swiss luxury watchmaker introduced the Big Bang Full Magic Gold watch to mark the occasion. The new watch blends the iconic design of the Big Bang with Hublot’s patented Magic Gold, billed as the world’s only scratch-resistant 18K gold. Hublot first announced its proprietary, patented “Magic Gold” alloy in 2011, and the material made its commercial debut in the case of a Big Bang Ferrari limited edition watch in 2012. It features a new one-click strap system that allows the Big Bang Unico’s strap to be changed quickly and easily. The Hublot Big Bang Unico Full Magic Gold is a limited edition of 250 pieces.
Price – The watch is priced at $16,300 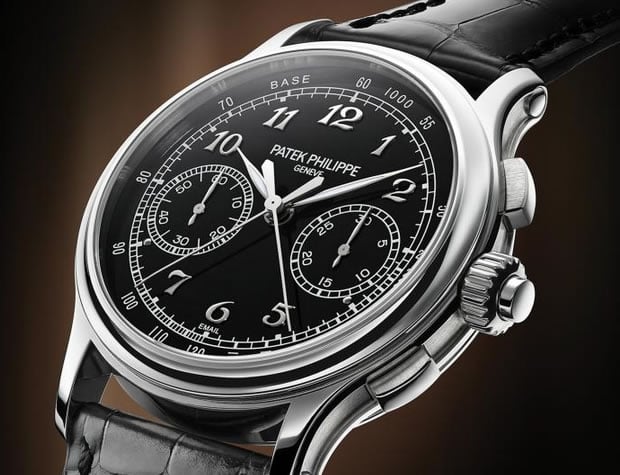 3. Patek Philippe 5370P Split-Seconds Chronograph
This brings us to the second Patek Philippe timepiece of the list, the Patek Philippe 5370P Split-Seconds Chronograph, and it is arguably the best Patek in years. With this new timepiece, Patek Philippe is aiming for those the traditionalists with a fondness for classical aesthetics .The watch utilizes the caliber CH 29-535 PS that the brand released in 2009 with a manually wound column wheel horizontal clutch. This pure split-seconds watch features a two-pusher model: one pusher for the basic start, stop, reset functions and an additional on/off button in the crown for the split-seconds function. The reason why this watch is so special is because it blends the best of today – the incredible caliber made entirely in-house — with the best of era gone by — a traditional dial, case and crown that is right out of the 1940s — in the possible way.
Price – The retail price is yet to be confirmed but it is estimated to cost close to $250,000. 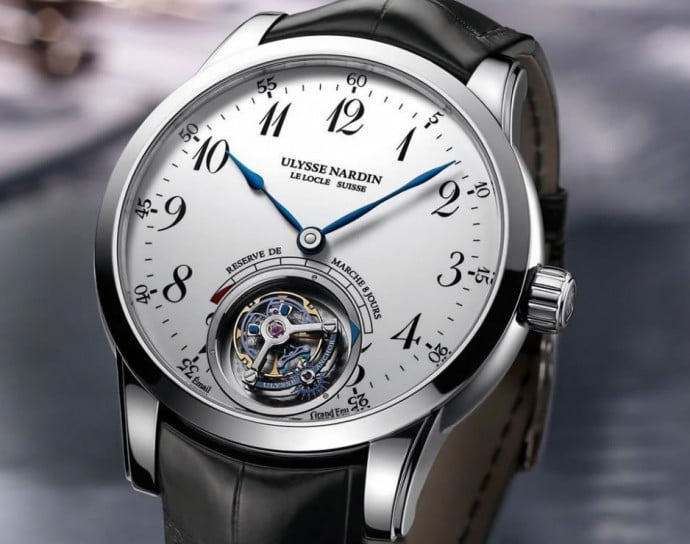 2. Ulysse Nardin Anchor Tourbillon
Unlike the highly ornate yet fascinating timepieces by Ulysse Nardin, the new Anchor Tourbillon watch is classy and packs an impressive amount of technology. The Ulysse Anchor escapement made entirely of silicium is the result of eight years of research and development. The prototype version was presented in 2014 and the luxury watchmaker has finally introduced the production version. The in-house made movement includes not only a tourbillon, but a constant force system as part of the regulator which has been designed with durability in mind. The watch uses a 44mm-wide case from the Classico collection and will be offered in either rose or white gold. It comes mounted on a simple leather strap and esthetically speaking, the Ulysse Nardin Anchor Tourbillon is a gorgeous timepiece. The watch is limited to just 36 units, 18 in each type of gold.
Price – The prices start at $84,000. 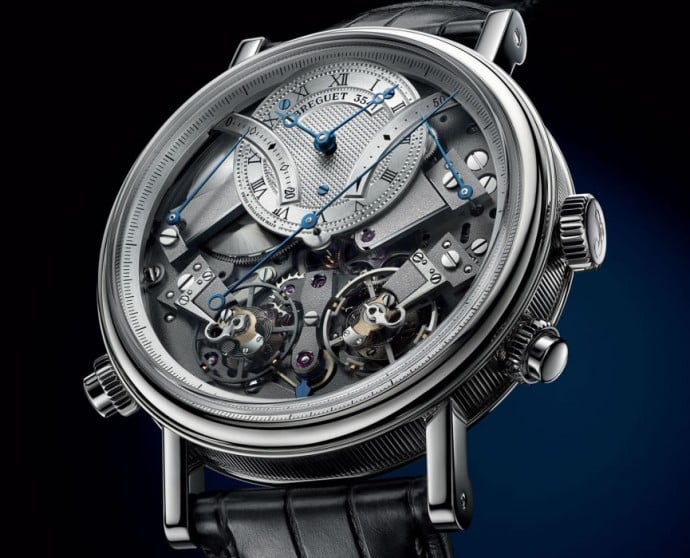 1. Breguet Tradition Chronograph Independent 7077
The new Breguet Tradition Chronograph Independent 7077 timepiece is very, very impressive, and that’s why we have placed it at the first spot. The watch is truly innovative and bears the trademark of Breguet’s impressive technical expertise. Though the brand doesn’t give away too much about their internal research and development, but their creations often carry new and innovating mechanical technology. Within its 44mm gold case, the 7077 has two entirely independent gear trains for its two primary functions. Unlike dual-escapement watches that use a differential to average out the rate of the two springs, the 7077 has no interaction between its parts. Both the gear trains are visible on the dial side of the watch and the chronograph balance assembly is on the lower left and the timekeeping balance is on the lower right. The chronograph regulator beats at 5Hz and the timekeeping regulator beats at 3Hz. It’s an incredible watch that blends aesthetic beauty with top-notch watchmaking technology.
Price – The Breguet Tradition Chronograph Independent 7077 is $78,900 in 18k rose gold and $79,700 in 18k while gold.

Tags from the story
Baselworld-2015