It was in 2002 when French fashion house Louis Vuitton made its foray into the world of high-end watchmaking. Still, in its early days, the watchmaking arm of Louis Vuitton got a massive boost when the brand acquired La Fabrique du Temps – a company started by Michael Navas and Enrico Barbasini, two of the most notable names in the watchmaking industry. Before starting their own watchmaking brand, the duo worked with some of the biggest names in the horology world. Michael Navas spent several years at Gerald Genta in the 1990s, then at its peak of churning out highly complicated timepieces. After a successful stint at Patek Philippe, he moved to Franck Muller, where he helped developed the signature Crazy Hours complication. The duo’s vast experience in producing exotic, complicated timepieces shows in LV’s signature creations post the acquisition of La Fabrique du Temps. And Louis Vuitton’s latest masterpiece, the Voyager Minute Repeater Flying Tourbillon, revealed in the French town of Courchevel after this year’s SIHH, perfectly demonstrates the duo’s talent in crafting highly complicated watches. 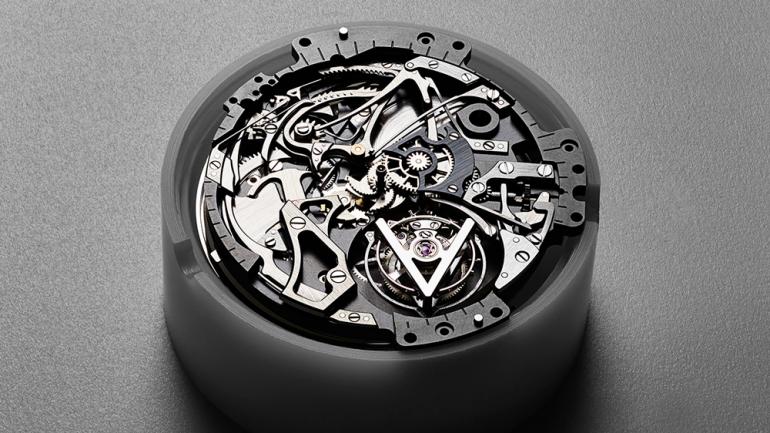 The Louis Vuitton Voyager Minute Repeater Flying Tourbillon combines the two high-complications of a minute repeater and flying tourbillon in a surprisingly compact case that measures 42 mm x 9.7 mm. Made of 18-karat white gold, the case houses the LV100 caliber which is made of 345 components and offers 100 hours of power reserve. The highlight of the watch is its minute repeater complication which uses two gongs and two hammers to indicate the hours, quarter hours, and minutes. The mechanism can be operated via the trigger positioned at 8 o’clock on the case. For the very first time, LV has introduced a minute repeater with a Cathedral gong for deeper chimes. Although the timepiece is not limited, each piece will be individually numbered and can be yours for a cool $295,000.