The hallmark annual event in the world of horology went public, this year. The exclusivity of a Wonders and Watches 2020 (formerly Salon International de la Haute Horlogerie or SIHH) was enjoyed by watch-lovers across the globe, who witnessed the bevy of exclusive announcements and showcases of the year on their smartphones and computers. While we missed the gala dinners and the revered overlords of the industry interacting with one another, given these unprecedented times, we didn’t miss out on the ingenuity of the usual suspects. From some of the most complicated timepieces to ultra-thinness live never before, brands have been bold and kept their fanbase awestruck as they have done for decades now. We’ve handpicked some of our favorite launches from the Geneva-based event. 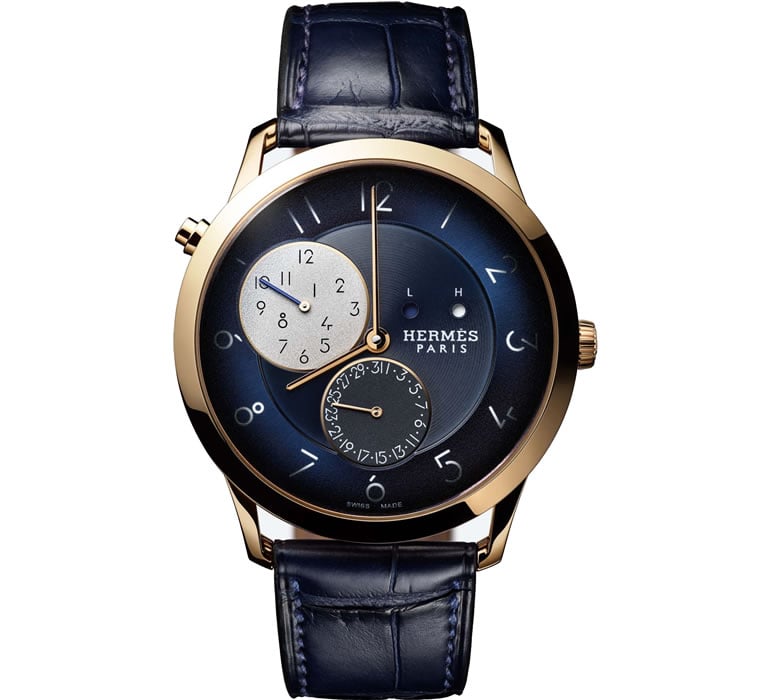 Hermès Slim d’Hermès GMT
Hermès has impressed yet again with the Slim d’Hermès GMT that builds in functionality with sincere elegance. Its 39.5mm case in rose gold measures under 9.5mm in thickness. The multi-textured blue dial provides the perfect backdrop for the two time-zone choice that can be found at 2 o’clock. The stencil-styled hour markers are exclusive to Hermès. It operates with the 3Hz movement that offers a 42-hour power reserve. The elegant blue alligator strap willfully underlines the brand’s preference for the color in this year’s range.
The asymmetry of the silver is strangely attractive as it sits dramatically next to the date dial. $19,675.

A. Lange & Söhne Odysseus
The Odysseus wears the look of a rebel with some reserve in check. A luxury sports watch in 18k white gold with ventilated rubber and brown calfskin straps isn’t the most common wrist ornament you chance upon today. The in-house Caliber L115.1 Datomatic runs the watch with a 50-hour power reserve. This may be called the more exquisite follow-up to last year’s steel rendition. However, the dial is different this time around, dressed in grey instead of the erstwhile blue. It is water-resistant up to 120 meters and offers auto-winding. The symmetrical day-date display is oddly satisfying. $40,600. 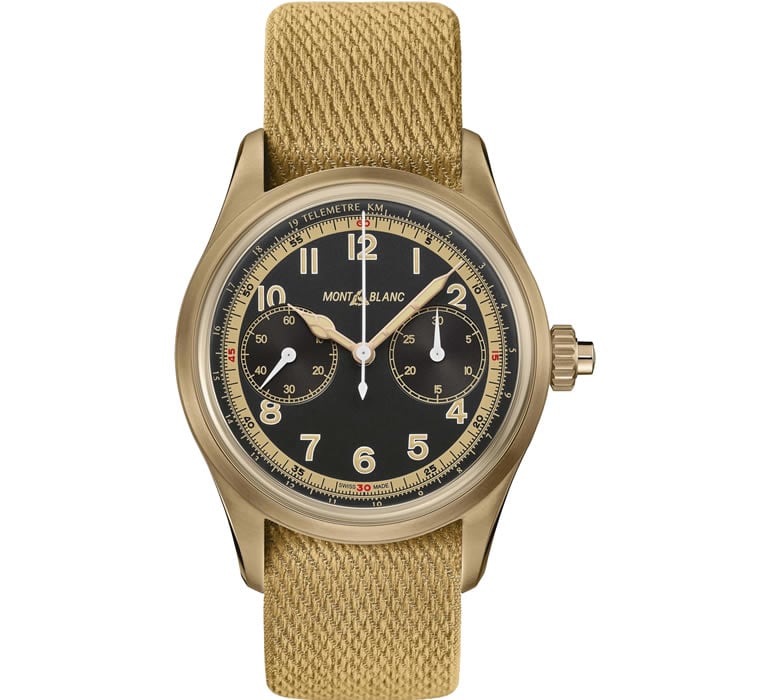 Montblanc 1858 Monopusher Chronograph Limited Edition
The indomitable personality of Montblanc’s limited edition 1858 Monopushes watch would need to be complemented by that of the one who dons it. The 40mm stainless steel case wears the elegant look of a smoked green dial on the outside while it surges confidently powered by a Minerva MB M13.21 caliber movement inside. It runs on a 55-hour power reserve and has to be manually wound. The richly textured green alligator strap echoes the 1858’s preferred color from the dial and gives it a personality of its own. The Super-LumiNova numerals and classic squelette hands give it a timeless appeal. €28,000. 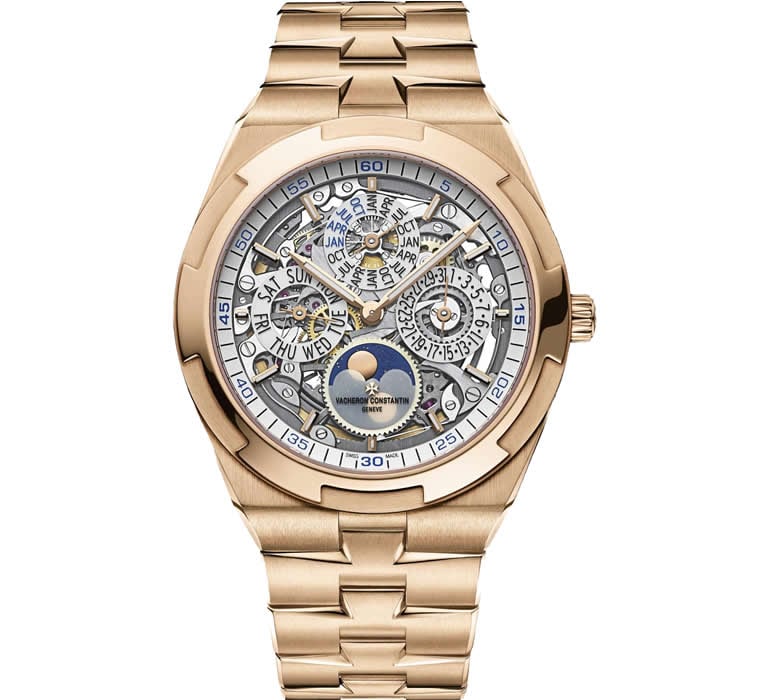 Vacheron Constantin Perpetual Calendar Ultra-Thin Skeleton
The first skeleton model from the house of Vacheron Constantin made its presence felt at this year’s event with the overhaul of the Overseas perpetual calendar. Available in pink gold, it comes with a 41.5mm case that measures just 8.1mm in thickness. The ultra-thin watch does tease us with its harmoniously noisy face. The metal hour markers seem to obey the order of things while the moon phase disc at 6 o’clock wears blue, as do the numerals around the dial. The watch uses a 40-hour power reserve and a caliber 1120QPSQ/1 movement. You also get a choice of an 18k gold bracelet or alligator strap and the inevitable blue rubber strap. $115,000. 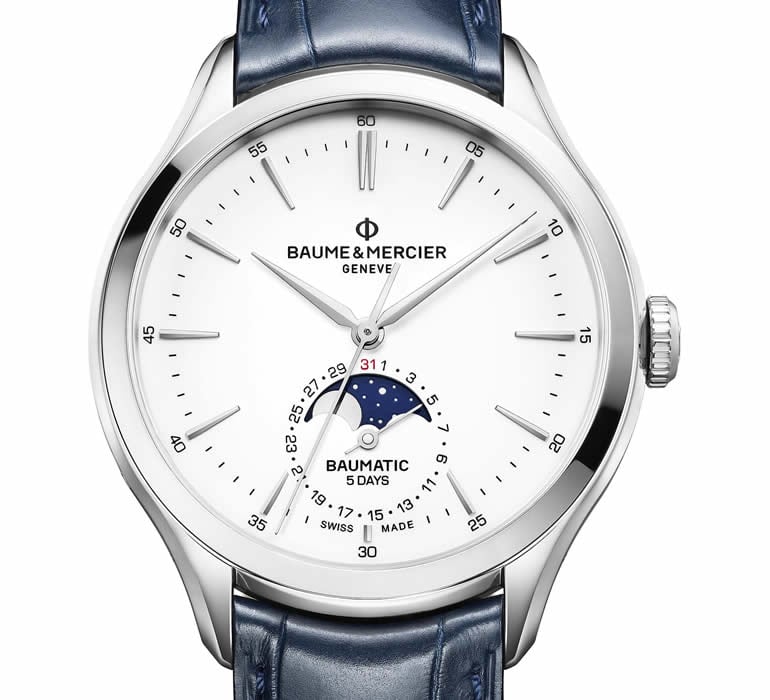 Baume & Mercier Clifton Moonphase
Among the reservedly priced timepieces at WAW2020 was the Baume & Mercier Clifton Moonphase. The steel-exclusive watch may have its critics but with a 5-day reserve and BAUMATIC BM14 1975 ACI movement you wouldn’t have much to writhe about. The brand has gone for a porcelain-like finish on the dial, where the only dash of color erupts around the moon phase dial at 6 o’clock. Available with leather strap and steel bracelet options, it has a sapphire case-back, with some interesting play, which is quite a contrast as compared to the sober front façade. It is a 42mm watch, which is larger than the rest of the WAW crowd. CHF 3,800. 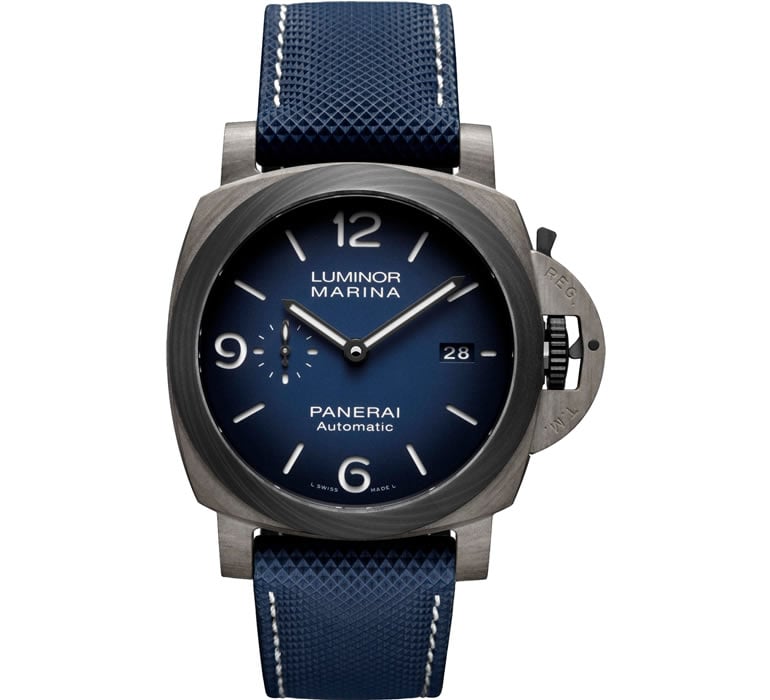 Panerai Luminor Marina Fibratech PAM1663
We’re thankful for the 70-year celebrations of the Luminor family this year because it has inspired some of the best timepieces from the house of Panerai. At first look, you would sense that the Marina Fibratech PAM1663 is here to brave the elements while retaining Panerai’s stately poise. The barrel-shaped case is made out of Fibratech, a material derived out of basalt and boasts about being 60% lighter than steel. It’s also more durable when faced with the aforementioned elements, including fire and water (up to 300 meters). The 44mm watch uses the P.9010 movement with a 3-day power reserve. It’s no surprise that this one’s in Panerai’s preferred blue. €16,000 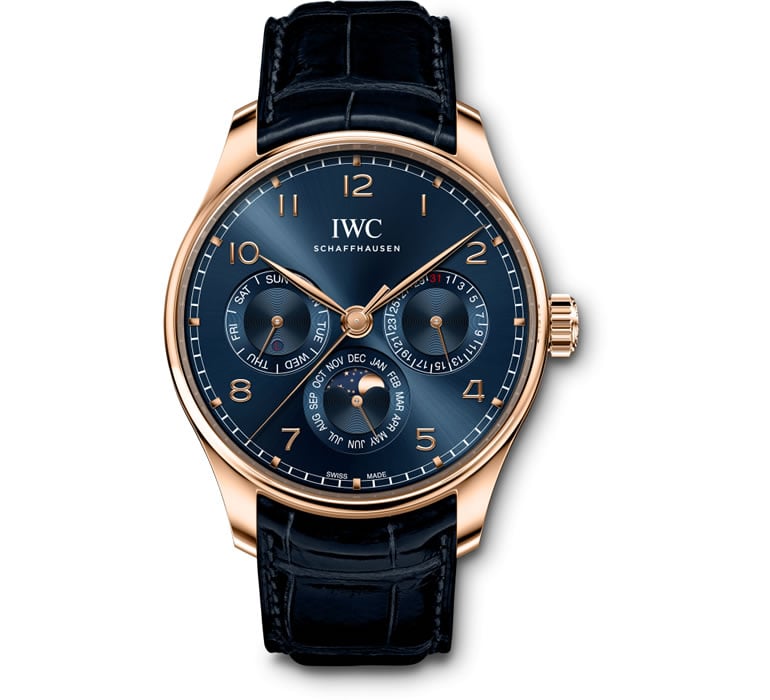 IWC Portugieser Automatic 40 And 42
IWC has shown uncharacteristic traits by bringing in a smaller Portugieser Automatic to WAW, this year. With three examples in steel and one in pink gold, IWC has introduced four memorable timepieces that measure 40.4mm and are 12.4mm high. This takes us back to 1998 when the company released the model with a 35mm automatic winding functionality. The new Portugieser boasts the latest-generation Pellaton winding system, employs the 82200 movement and beats at 28,800 beats an hour, with a 60-hour power reserve. The second-dial at 6 o’clock is the only addition to the silver dial that is highlighted with blue markers and the blue hands. $7,500 (steel)/$17,200 gold. 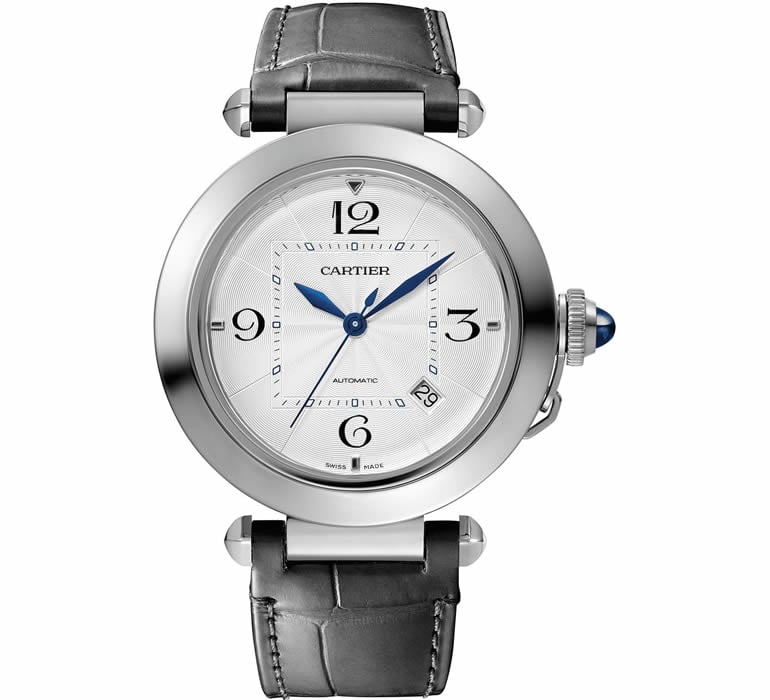 Cartier Pasha de Cartier
Thirty-five years after its first appearance the Cartier Pasha round-case makes a return this year. And this time it’s an entire range that spoils even the defiant purists. The Pasha 41mm and 35mm come in stainless steel and yellow gold, with the latter being for women. The bezel has been polished and the case band is brushed, as compared to the original variant. You can have your initials engraved on it too. The Pasha Skeleton is what really catches the eye and shows us what a long way the model has come. It is powered by the 9624 movement and a 50-hour power reserve. Then there’s the Pasha Skeleton Tourbillon, which is available in pink gold and white gold and set with diamonds. Cartier has impressed a fair share with this elaborate ensemble.